What You Can Learn from Wendy’s Social Media Strategy

He’s laughing again. I glance up to see my husband lounging on the couch, phone in hand, chuckling to himself as he scrolls, scrolls, and scrolls some more. This has become somewhat of a nightly ritual at the end of each day, catching up on his favorite Twitter accounts and sorting through pages of humorous threads and replies. While he almost certainly runs across informative, educational, or thought-provoking tweets, I rarely hear about them. However, he’s always eager to share the funny ones with me.

He’s far from alone. As society’s content expectations continue to evolve, people are turning to social media for comedic relief, and the demand for quirky, off-the-wall humor is on the rise. Many brands in the fast food industry are embracing good old-fashioned roasting to stay relevant and top of mind among consumers, particularly the typically hard to impress Gen Z. Originally reserved for improvisational comedians, fast food restaurants are now roasting competitors and consumers in the form of quick-witted comebacks and sassy responses, and no one does it better than the self-proclaimed “First Lady of Fast Food,” Wendy herself.

Wendy Is The First Lady of Fast Food

Don’t let the sweet pigtails and innocent smile fool you. Wendy’s is the queen of comebacks and absolutely savage when it comes to roasting competitors and consumers alike on Twitter. With more than 6,500 restaurants globally, The Wendy’s Company is the world’s third-largest quick-service hamburger company, with a market cap of $4.5B and over 3.4 million Twitter followers. Over the last few years, the brand has perfected the act of serving fun-loving snarky tweets, but this hasn’t always been the case.

Circa 2017, Wendy’s realized its play-it-safe corporate social media strategy was for the birds. The strenuous approval process wasn’t conducive to cultivating an organic, engaged base of loyal followers, so they eliminated bureaucratic reviews for their Twitter account. After empowering their social team, Wendy’s has surged ahead as one of the most effective brands online. Their commitment to tone and individuality makes the brand an authentic trailblazer, transforming the Twitter account from a one-way communication machine into a battleground of the wits. This is a point of pride, as illustrated in their Twitter bio: “We like our tweets the same way we like to make our hamburgers: better than anyone expects from a fast food joint.” 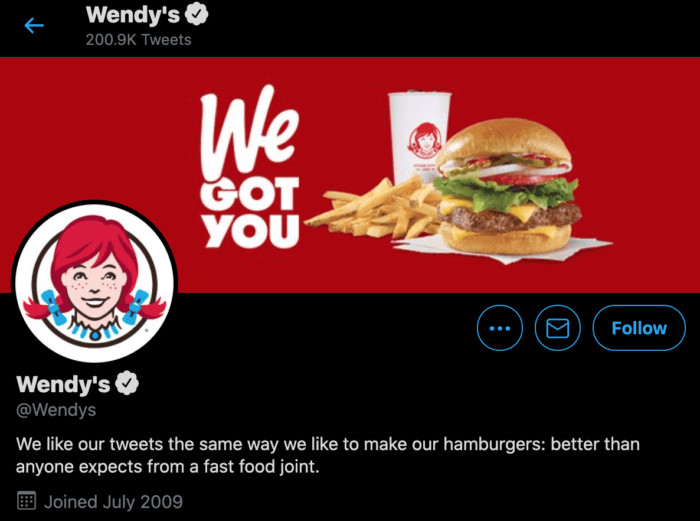 While humorous, sassy engagement may not be for every company, it’s hard to deny that roasting has become an effective focal point of Wendy’s social media reputation.

For one, the fact that Wendy’s created an entire messaging ecosystem around “beef,” or creating and responding to conflict head on, is masterful. One theory is that the term “beefing” originated in the old west among sheep farmers who were competing for grazing land with cattle farmers. The sheep farmers used the term with each other to refer to a conflict, which was what they had with the cattle farmers, or “beef” farmers. For a hamburger company, the term applies not only to their product, but the way they’ve chosen to communicate. It’s funny, it makes sense… it just works.

Secondly, the sheer creativity required to leverage so much mileage out of this message is quite impressive. In 2018, following their banner breakout year of roasting everyone from McDonald’s to Burger King and beyond, Wendy’s went the extra mile and released an EP entitled “We Beefin’.” The 10-minute compilation, featuring tracks like “Twitter Fingers” and “Rest in Grease,” was immediately available on popular streaming platforms like Spotify. 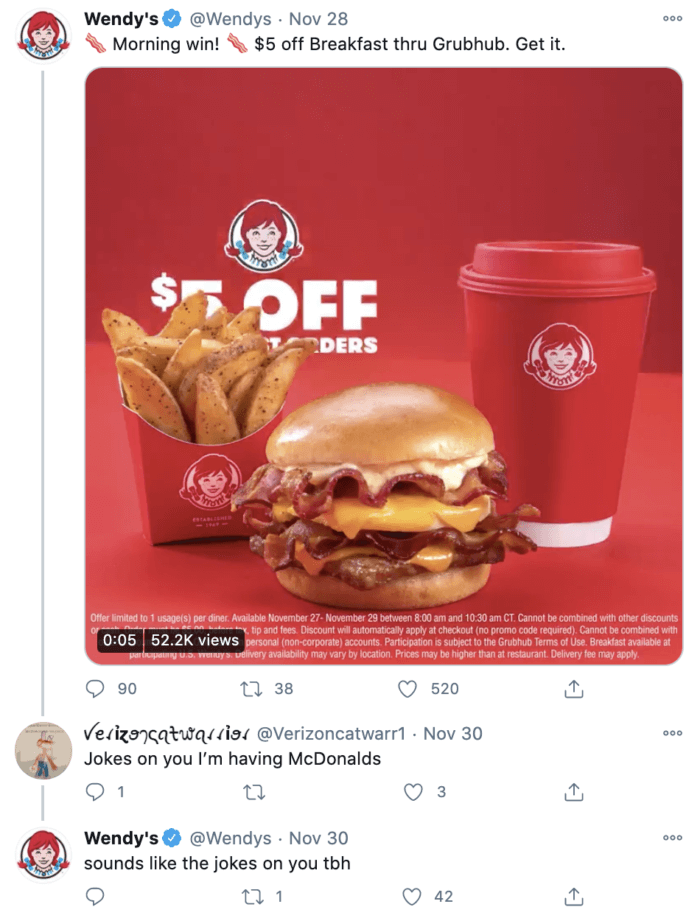 This kind of exemplary true-to-brand communication and content creation is admirable. Every company should strive for this kind of commitment and consistency in order to grow and keep a loyal following online. Two years later, Wendy’s remains true to her roots, issuing sick responses left and right that keep people on their toes (and keep spectators laughing).

She Doesn’t Let Other Brands Push Her Around

Wendy’s is particularly skilled at monitoring mentions and the competitive landscape, joining the conversation when she sees fit (which is often). Sometimes that’s unprompted, and other times it’s when another brand intentionally starts something. This fall for example, as part of their campaign to launch their new Spicy Ghost Pepper Donut, Dunkin’ fired social media shots at multiple fast food restaurants. While other brands simply ignored the mild attack, Wendy’s couldn’t help but burn back. 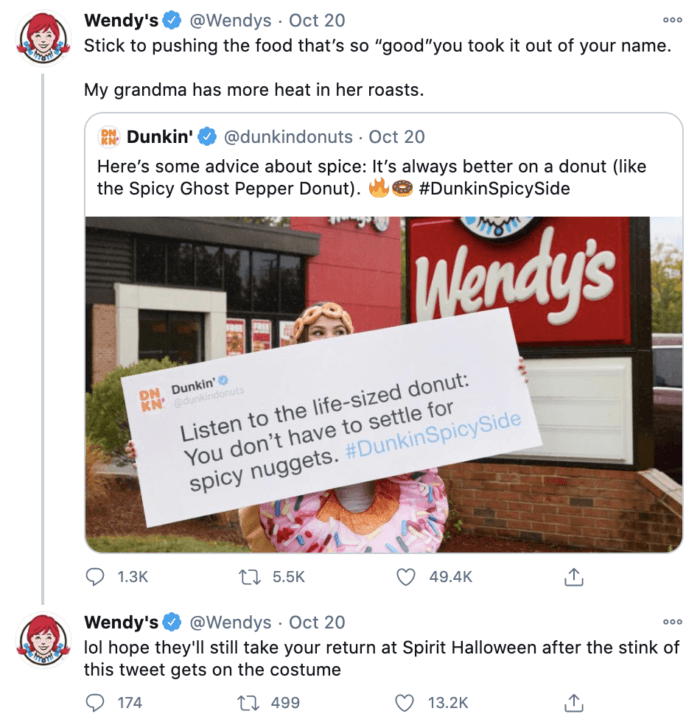 What followed was a sad attempt by Dunkin’ to “outtweet” the First Lady, which obviously failed. Wendy’s is just superior when it comes to issuing sassy comebacks, and things almost always backfire when another brand attempts to prove otherwise.

Another food fight recently broke out when McDonald’s released their version of spicy chicken nuggets, a well-known staple on Wendy’s menu. When a Twitter user inquired about her thoughts on the news, Wendy’s social media team took the opportunity to roast not one, but two industry competitors at the same time. 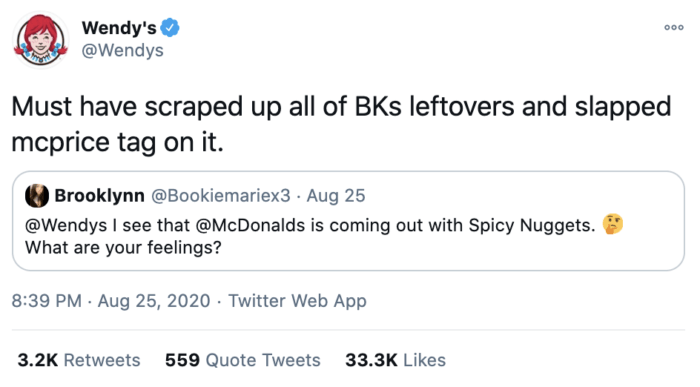 By maintaining their quick-witted reputation, Wendy’s continues to remain on top: on top of the brand’s Twitter game, and top of mind among consumers. This is especially important for a restaurant, when just one brand mention is enough to put a mouth-watering craving in motion for a hungry follower. 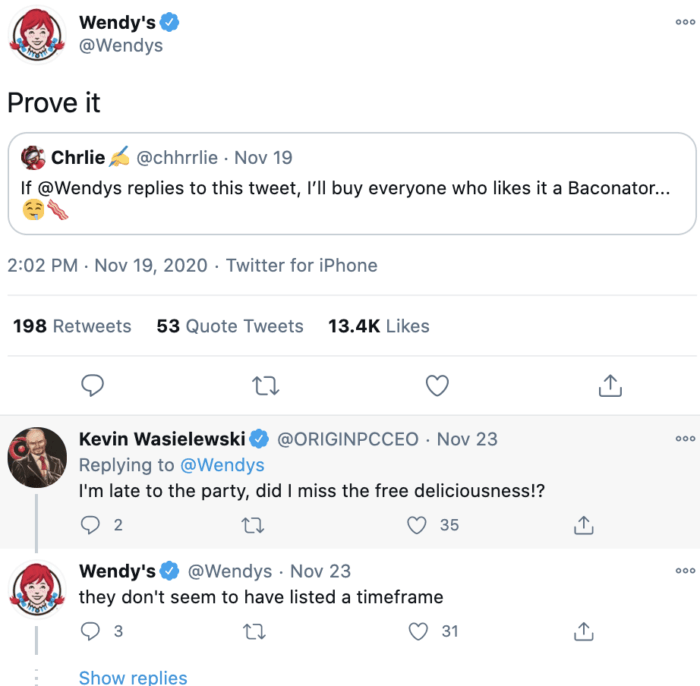 She Gives Customers Want They Want, Even If It’s a Sizzling Personal Roast

Wendy’s social media team operates Twitter like a true two-way communication platform, prioritizing customer interaction above all else. That’s especially important given this is what people have come to expect in our fast-moving, instant gratification world.

As one might expect, people regularly take to social media to air grievances about a poor customer service interaction or product experience. Unhappy customers are looking for immediate resolution, and social media is a quick way to get the brand’s attention in a public forum.

While Wendy’s is known for her sassy tone, she knows when to be serious too. By swiftly addressing customer service complaints and questions with action-oriented responses, including commitments to get in touch with specific franchises to make things right, Wendy’s nips problems in the bud. This way the brand can move on, focusing on entertaining and connecting with audiences instead of dwelling in the daily drama. 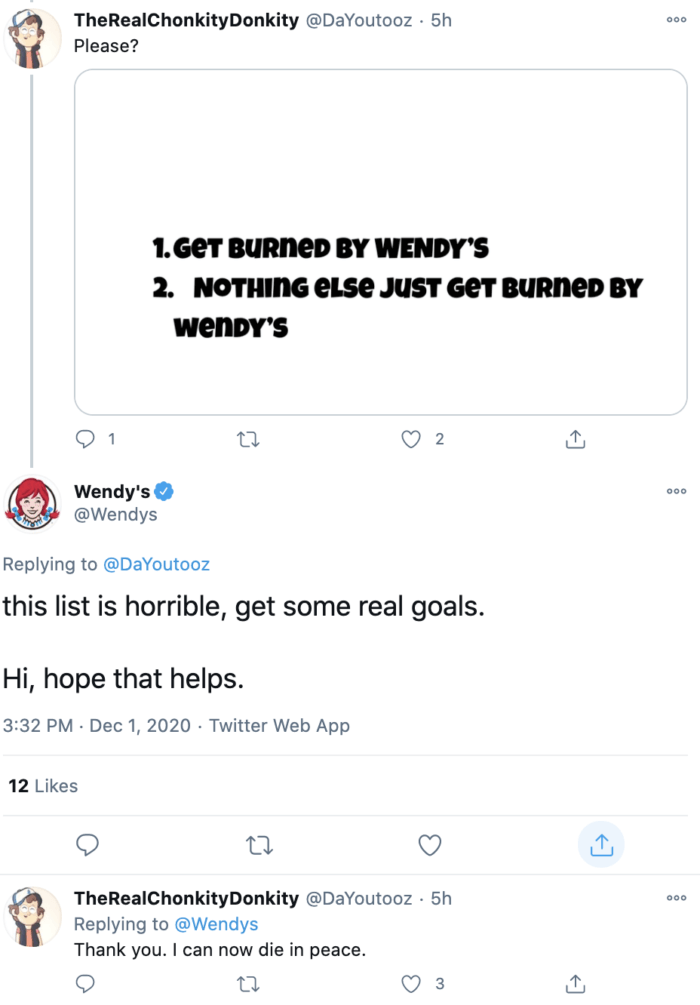 That said, followers also purposefully reach out just to get a famed tongue-in-cheek response from the brand. Wendy’s has developed a reputation for issuing short, snappy responses that customers crave almost as much as their menu. There’s a certain thrill that comes along with writing back and forth with an influencer, celebrity, or brand account. It seems unlikely that they will respond unless they have to, so when they do it is exhilarating and delightful. In these cases, Wendy’s social media team is not afraid to dish it out. 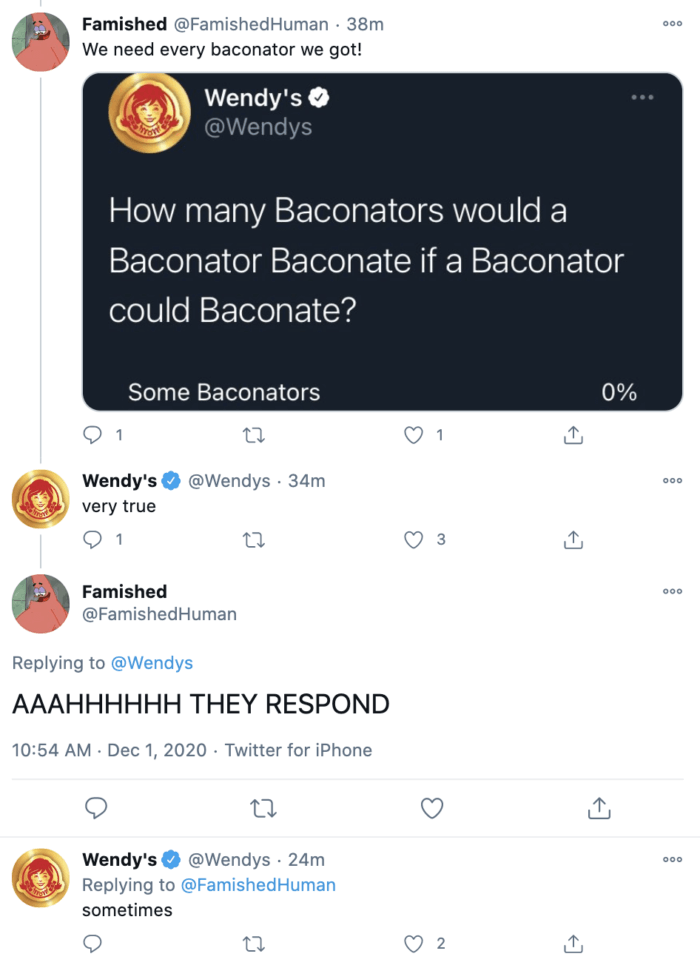 To be sure, the fast food industry is a unique sandbox to play in. The brands have consistent products and reliable service, so they can afford to take some risks in how they use social media. While some industries like convenience stores have adopted a similar tone and approach, Wendy’s snarky social media strategy isn’t one size fits all (so copycat with caution: we’re looking at you, Dunkin’). No matter if your brand can pull it off or not, it’s a fun case study to see how acting outside the box can pay dividends if executed just right.