What began as a sort of “microblogging” site, Twitter is now the go-to platform for brands to connect with their audience one-on-one.

And with 211 million active users, Twitter isn’t showing any signs of slowing down. The conversational platform will continue to be a useful place for brands to show up on to engage with their audience in a more casual way.

But data-driven marketers know there’s more to a Twitter strategy than just coming up with creative tweets and replying to followers. In order to measure your performance, figure out what your audience interacts with, and see how you stack up against the competition, marketers have to know what a good engagement rate on Twitter is.

Below, let’s dive into how marketers can measure their brand’s Twitter engagement rate as well as get some inspiration from brands across all industries that are performing well.

There are several ways to calculate Twitter engagement rate. It all depends on which metrics you measure.

Twitter engagement rate is calculated based on all these interactions divided by total follower count. Here’s what that formula looks like in practice:

Engagement rate per post is a slightly different metric than engagement total alone, but we find that it’s more accurate. Why? Engagement rate per follower takes into account your follower count and posting frequency which can help brands of all sizes see how their content is performing in relation to the competition — even if competitors have larger audience sizes.

According to our 2022 Social Media Industry Benchmark Report, the overall median engagement rate on Twitter is 0.037%. This is the rate for brands across all industries, from fashion to nonprofits. On average, these brands are also posting about 5 times per week.

For those that want to go above and beyond the average, take note of how the overall top 25% of brands are performing. The top brands, regardless of industry, have an average engagement rate of 0.122% and post about 4.2 times per week. Here’s the breakdown:

Overall rate for brands in the top 25%:

While the overall median engagement rate for Twitter is a great benchmark to start with, every industry performs differently on the platform.

Let’s take a look at a few different industries to see what the best-performing brands are doing well and which Twitter best practices are worth following.

Higher Education brands continue to show up on Twitter and outperform most industries. And it makes sense that brands in this space are so active on Twitter since that’s where a lot of their audience spends their time. According to Twitter, nearly half of all tweets were sent by users aged 16-24 in 2021.

To reach their target audience of college students, schools post more frequently and have received a higher engagement rate than the overall median across industries.

One example of a top-performing Higher Education post is this tweet from Utah State University. The post secured a whopping 14% engagement rate for its use of a popular meme based on this image of a bundled-up Bernie Sanders that made the internet rounds after the 2021 inauguration ceremony. 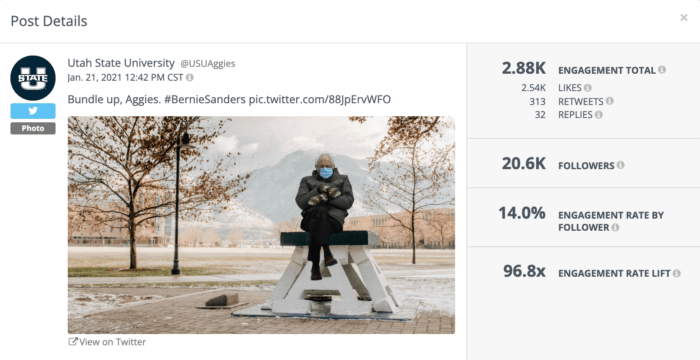 Not only was this tweet timely and relevant, but it was a great way to show off the school’s campus. The lesson here is to stay on top of trending memes and conversations, especially if it’s something your audience is talking about or engaging with.

Twitter is the source of many memes, so if your social media team has the time and resources, it’s helpful to keep tabs on what’s trending on Twitter so you can jump on relevant topics as soon as they happen.

You can also employ a social media listening tool so that you don’t have to be scrolling through Twitter 24/7 but can still keep an eye on what your audience and competition is talking about.

Rival IQ even has a feature where you can see trending topics and hashtags for your industry. 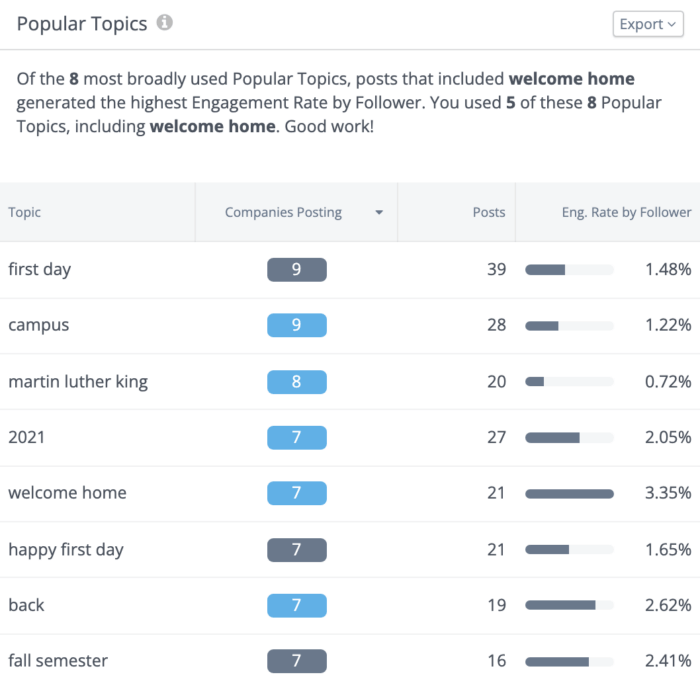 Sports Teams on Twitter are the most frequent posters of all industries at nearly 42 posts per week — and it works for them. The Twitter engagement rate for Sports Teams is 2.2x greater than the overall median across industries.

One reason Sports Teams tend to post more often than other brands is because the essence of the industry revolves around frequent game and team updates during their playing season. These updates keep fans engaged and in the loop so that they feel like they’re part of the team.

In an industry that’s clearly fan-driven, it makes sense to carry that same feeling of community across to social media platforms. 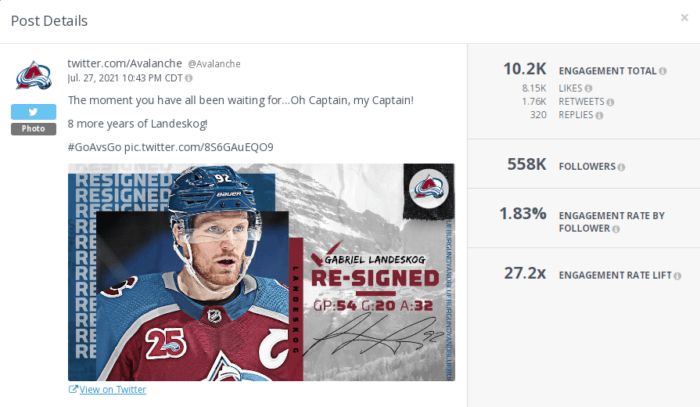 This was the Avalanche’s highest-performing tweet, and given that it’s an exciting announcement about the team’s captain committing to eight more years, it makes sense that it resonated with its audience.

But the most notable thing about this tweet was that it was actually posted during the off-season.

The lesson? Even in an industry as seasonal as hockey, there is always something happening behind the scenes that audiences would appreciate a glimpse at.

Sports Teams can keep their social strategy active and their fans engaged all year-round by regularly sharing things like team updates, highlights from the previous season, or teasers for the forthcoming season.

There’s no shortage of competition for Food and Beverage brands. The space is as packed on shelves as it is on social media, so brands in this industry have to lean into content that works as well as find ways to stand out.

Sports drink company Body Armor offers an example of how to leverage a holiday and post something visual to boost engagement on Twitter. 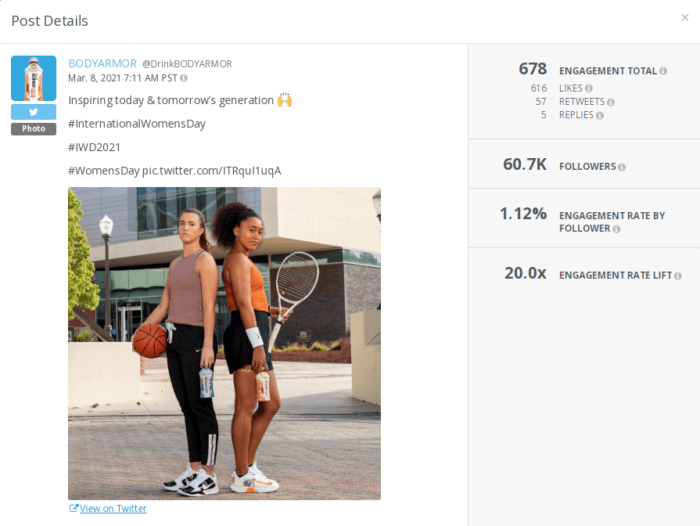 The hashtag #internationalwomensday was in the top three hashtags used by Food and Beverage brands on Twitter last year, Body Armor being one of them. Body Armor recognized the holiday by dedicating its post to female athletes who are partners with the brand.

When you’re up against major players like Gatorade, brands in this category have to find ways to join in on the conversations in order to be heard. One way to do that is by tapping into popular hashtags and topics like holidays.

Food brands can participate in major holidays like Father’s Day or Valentine’s Day (these were also in the top-used hashtags in this space) as well as food holidays like National Ice Cream Day.

It’s also worth mentioning that while it helps to have a celebrity name attached to your brand, food and beverage companies don’t have to spend their entire marketing budgets on securing a big-name celeb. Brands that are on the smaller side or just starting out can consider partnering with micro-influencers, which are those with less than 15K followers. Don’t let that number sway you — micro-influencers tend to have higher engagement rates than those with larger audiences.

Though they tend to post less than brands in other industries, Alcohol brands are another industry with a good engagement rate on Twitter.

Given the nature of the industry, alcohol brands have a lot of leeway to be fun, celebratory, and entertaining on social media, and especially on Twitter.

Kahlúa has proved to be a top alcohol brand on social media, and Twitter is no exception. One of its most engaging tweets is — no surprise here — a giveaway. 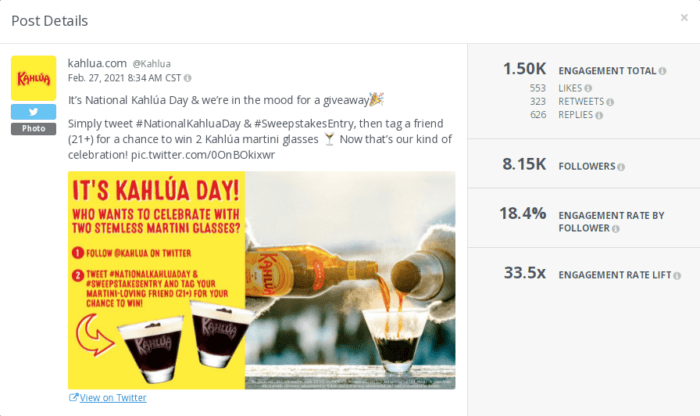 For Kahlúa, this tweet’s goal was two-fold. The brand used the post to celebrate National Kahlúa Day as well as run a giveaway which gave them a boost in engagement.

Like food and beverage brands, alcohol brands tend to perform well when they leverage holidays. But instead of simply encouraging people to drink some Kahlúa to celebrate the occasion, the brand went the extra mile by giving its audience a chance to participate in the festivities.

The key here is to double down on content that you know performs well. In the case of alcohol brands, combining a giveaway and a holiday is a fail-safe way to boost engagement.

When you think of brands on Twitter, what typically comes to mind are fast food chains roasting one another or consumer brands jumping on the latest meme. Because the platform is more conversational and relaxed, the last industry you likely associate with Twitter is business or financial companies.

One of those top-performing Financial Services brands is the personal finance app, Mint. This tweet from Mint had a 0.67% engagement rate, which is a little more than 18x greater than the overall median. 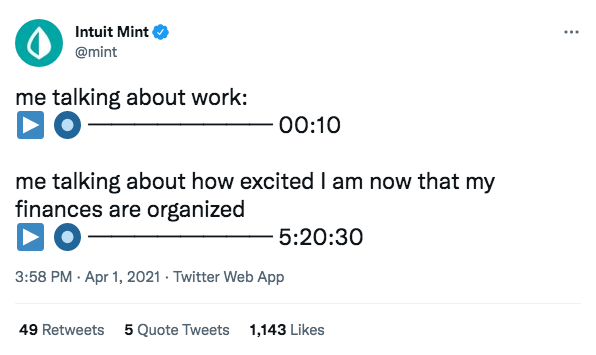 As an app, Mint makes personal finance approachable and this mission clearly translates into its Twitter strategy. What could be considered pretty dry topics — budgeting and finances — are communicated in a light and authentic way that makes its audience feel like they’re talking about money with a friend.

By meeting its audience where they are and adjusting its tone to fit with the conversational and meme-driven tone of Twitter, Mint is able to connect with its app users in a relatable way.

For B2B brands on Twitter or Financial Services companies that are consumer-facing, it’s important to communicate your offerings in a way that makes them approachable and easy to understand. Participating in the latest meme or tweet format is a great way to experiment with how well you can explain a seemingly boring or technical topic.

If you want to accurately measure and improve your brand’s Twitter performance, marketers must know how to calculate Twitter engagement rate and have a benchmark to compare it with.

To sum it up, the overall median engagement rate on Twitter is 0.037% and the median posting frequency is 5x per week. These are the numbers to aim for if you want to compete with the majority of brands.

If you want to boost your Twitter engagement rate, here are a few best practices to follow as demonstrated by some of the top-performing brands we covered:

Twitter is always evolving and so is the average engagement rate. But as long as you continue to measure your performance, compare it with the competition, and adjust accordingly, your brand has a chance to break through the noise and create content that keeps your audience engaged for the long run.