Best College Instagram Accounts and What We Can Learn From Them

When looking to expand marketing efforts, one of the first questions we ask is, “where is our target audience?” For colleges and universities, the answer is online.

Current and prospective students are both users and trendsetters on social media platforms. It is where they connect with peers and all other players in their lives, from their preferred brands to their university of choice.

So how can higher education institutions most effectively meet college students where they are?  We have a few ideas.

In our research for the 2022 Higher Education Social Media Engagement Report, we did a deep dive into the top universities on social media. You can read through our analysis to see how your school ranked or get some inspiration for the upcoming school year.

For now, let’s focus on what the top colleges on Instagram are up to.

Overall, higher education is dominating the game when it comes to Instagram. To put things into perspective, consider the following engagement figures from our 2022 Higher Education Social Media Engagement Report.

Higher education knows a thing or two about connecting with its audience. Let’s take a look at the winners for the best colleges and universities on Instagram and see what these top college Instagram accounts are doing, what the data tells us, and how this information can help you improve your Instagram content.

The #1 spot for top college Instagram accounts goes to James Madison University. The Harrisburg research school did an excellent job on Instagram this year and even saw a 43.4% increase in total engagement between June 2021 and May 2022.

So, what do the most successful posts on their Instagram page have in common? Sports, sunsets, and more sports.

Looking at the content with the highest engagement rates, we see that four of the top five feature one of their athletic teams. These posts generated an impressive 62.5K likes and comments. From stirring up school spirit for the softball team’s journey to the Women’s College World Series to celebrating the men’s basketball team’s home win, JMU’s Instagram feed posts found online success alongside their athletes. 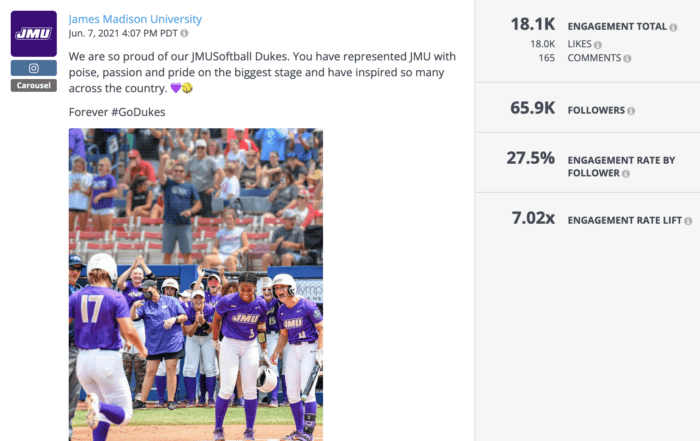 In addition to athletic victories, Duke students and staff members love a good shot of their school campus set against a vivid pink, blue, and orange backdrop. One sunset post saw their average engagement rate nearly triple, contributing to our theory that eye-catching campus shots are a top-performing trend. 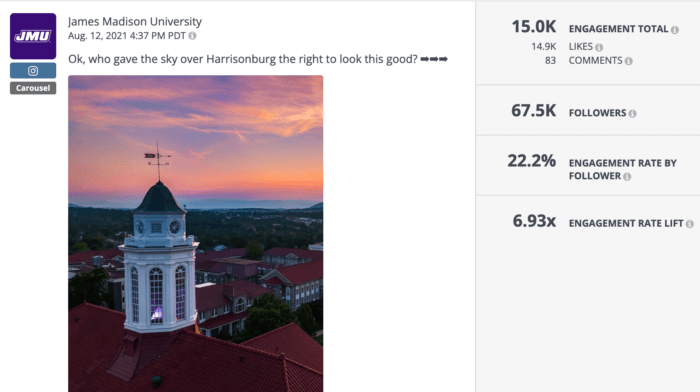 Fans of all followings love being featured on public platforms. Nowhere is this more evident than in one Texas A&M Instagram post that earned them 301K likes and comments and a 96.9% engagement rate by follower.

The post captures a moment during a football game between Texas A&M and Auburn, in which the Jumbotron pans to an Aggie merch-clad mom and baby duo. Mom holds up her binky-toting baby for the camera, and the crowd goes wild. The clip was later turned into a 14-second Instagram Reel and paired with The Lion King’s famous “Circle of Life.” 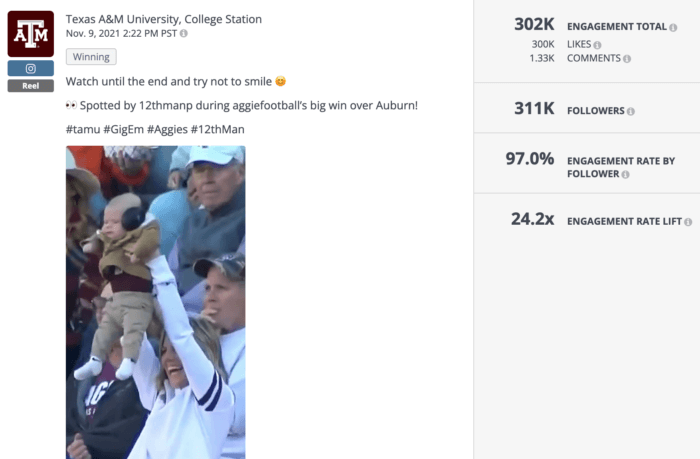 Fans commented under the post with messages like “mama raising a king….. love it” and “Understood the assignment.” Other comments focused on the university’s win over Auburn.

This post was undoubtedly a stand-out moment for Texas A&M and tells us that universities should never miss an opportunity to post about their big wins and cute kids. (Bonus points if you add a touch of 90s nostalgia.)

At every home game since 2017, University of Iowa players and game attendees have participated in the Hawkeye Wave. The tradition takes place at the end of the first quarter when the crowd takes a moment to wave to the pediatric patients and others watching from neighboring UI Stead Family Children’s Hospital. The team has also started asking that week’s kid captain to choose a new song to go along with the Hawkeye Wave.

The tradition seems to be at the heart of UI athletics, both on the field and online. In a post featuring a picture and video of the Hawkeye Wave, Instagram users responded with 15.9K likes and comments. That’s 3.76x more engagement than their average post. 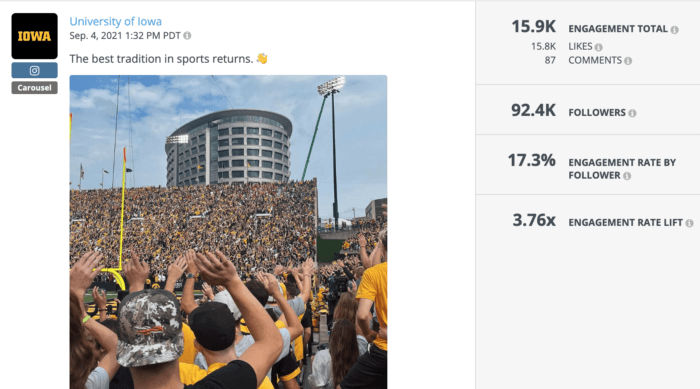 The caption read: “The best tradition in sports returns. 👋” and generated nearly as much engagement from their online audience as the post celebrating their win over hometown rival Iowa State. In other words, it was a pretty big deal.

NC State might rank 4th for university accounts on Instagram, but they take the cake for the cutest mascot on the app. Tuffy III is a direct descendent of the original mascot, Tuffy I, and frequents North Carolina State University‘s campus and sports arenas.

Whether celebrating his first birthday or #NationalDogDay, online supporters can’t get enough of this kind of content. Tuffy is such a hit that he appears in all four of the university’s top feed posts for total engagement and engagement rate by follower.

The university’s most successful post features Tuffy III smiling for the camera on the Carter-Finley Stadium field and brought in 3.6x more likes and comments than their average post. 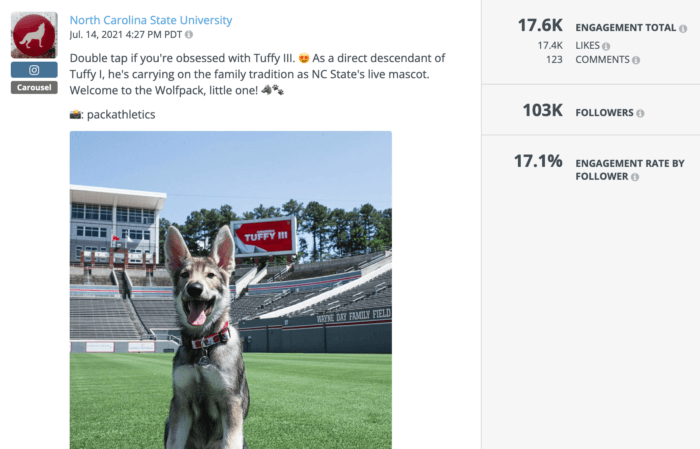 The moral of this story is simple: Animals are a huge hit on social media. More specifically, pets. If you’ve got any of those running around on campus, don’t forget to snap a shot.

Another important element of North Carolina State’s top-performing Instagram posts is their captions. Each caption post comes with a direct instruction to followers, such as “Double tap to wish the goodest boy a happy 1st birthday” and “Double tap if you’re obsessed with Tuffy III. 😍”

By now, we’ve all heard social media experts preach the importance of using a Call to Action (CTAs.) They interrupt mindless scrolling and direct followers to the next desired step. This strategy seems to work for NC’s engagement and is easy for other college Instagram accounts to replicate.

In January, Georgia Tech posted a current student’s photo to the college’s official Instagram account. The image captures an idyllic scene of winter flurries and a snow-covered campus. 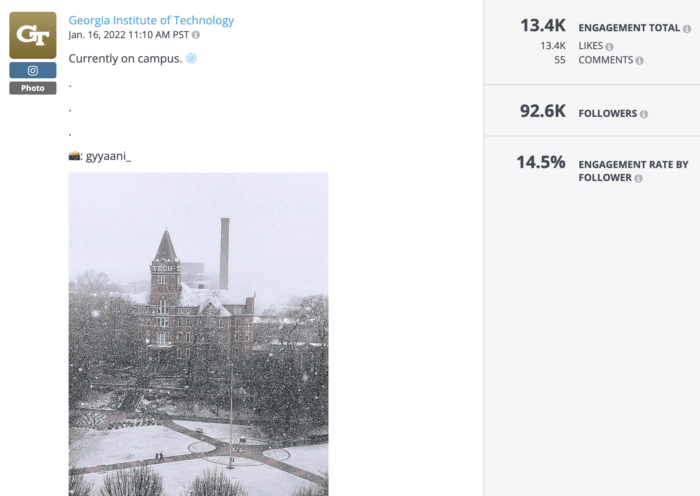 The post saw a 14.5% engagement rate by follower, bringing in 13.4K likes and comments – 1k more than their #2 most popular post. The photographer and other Yellow Jackets marveled at the beautiful shot in the comments.

Another successful post, which brought in 12K likes and comments, documents the almost total lunar eclipse as it was visible above Georgia Tech’s Tech Tower. The caption noted how rare this occurrence was and that opportunity to take this picture would likely not come again for hundreds of years. 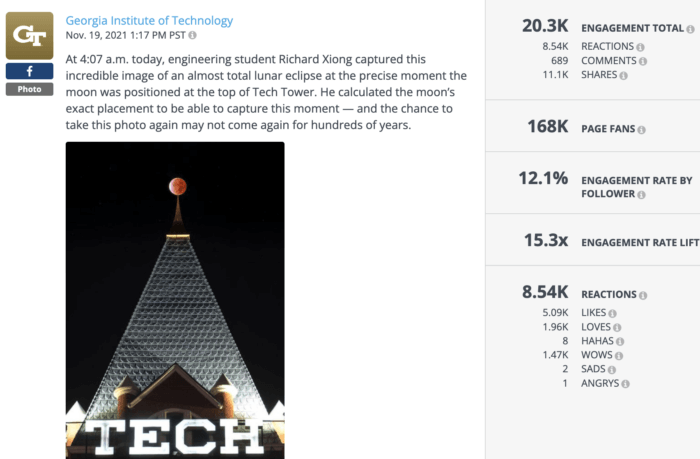 Considering the school is renowned for its engineering and science programs, it’s no surprise that one of its most popular Instagram posts features elements of both.

To document the transition from fall to winter at Northern Arizona University, the university posted a series of high-quality pictures capturing current students walking to class and other campus life shots. The photographer threw in some editing to emphasize the color contrast between the crunchy snow and orange, red, and yellow-dressed trees. 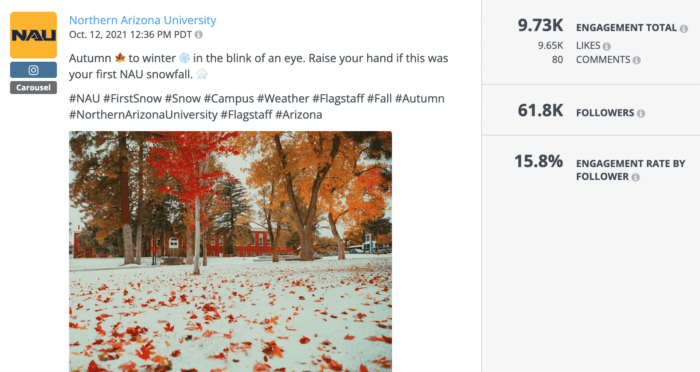 The photos prompted 15.8% of their 65.6K followers to interact with the post, leaving comments like “So pretty almost makes me cry😍🍁” and tagging friends and family.

This was quite the stand-out moment for the university on Instagram, garnering 9.73K likes and comments and making us all yearn for frosty windows and hot chocolate.

The University of Cincinnati is one of those schools that just really, really love their football team. The Bearcat team appears in all of the university’s top 10 posts on the app. They often use Instagram to show off impressive stadium shots, commemorate big wins, and even celebrate an on-field engagement.

With 14.1K likes and comments and a 23.9% engagement rate, their most successful post featured a video of the crowd getting ready for the 2021 homecoming game.

The video shows a sea of supporters in red, black, and white attire having fun and singing chants as the marching band plays. It is the quintessential college game-day scene. 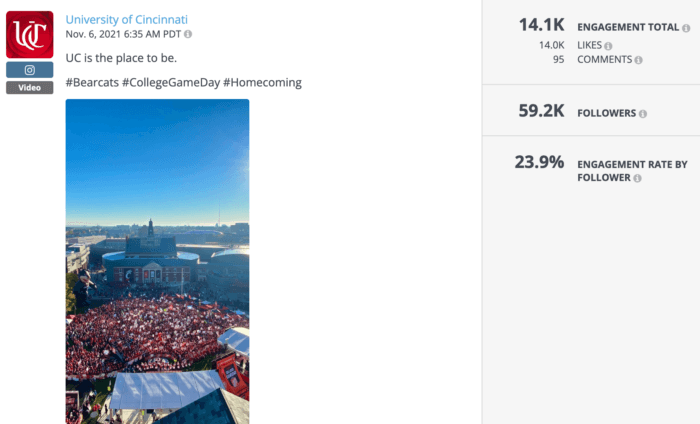 The next most popular post is a mixed carousel of videos and photos showing the moment fans rushed the field after the AAC championship win. Game-goers sang “We are the champions” in unison, and supporters watched with FOMO from their couches.

The festivities continued online with a post that brought in 13.8K likes and comments gushing over the unforgettable college experience.

In these clips, we see festivities in which not everyone could be a participant. So by using videos rather than just static photos, UC makes its post more dynamic and brings the action closer to online supporters. This was a great way to increase engagement and stir virtual school spirit.

University of Pittsburgh owes much of its Instagram success to the 42-story campus centerpiece: the Cathedral of Learning. Commonly referred to as “Cathy,” the skyscraper is the subject of four out of five of the college Instagram’s top performing posts, bringing in a total number of 25.33K likes and comments combined.

In one popular post, bright blue lights shoot off from the top of the building celebrating Pitt’s ACC Championship win. The post boasts a 16.7% follower engagement rate and had 7.34K likes and comments. 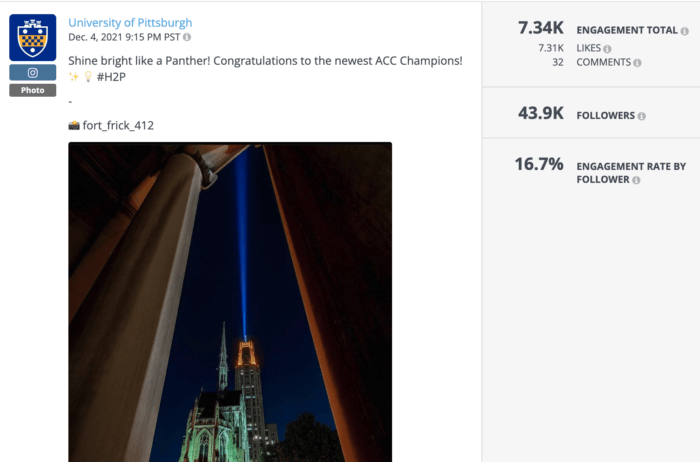 Another top-performing post, with 7.44K likes and comments, shows Cathy on full display in front of a pink and purple sunset.

Cathy, and all her notoriety, seems to be U of Pitt’s best bet for reaching its target audience. So if you’ve got something that makes your campus stand out, whether it’s a skyscraper, historic building, or some other notable feature, don’t be afraid to flaunt it.

So, when assessing your social media strategy for the school year, consider how you can use these top-performing college Instagram strategies to improve your Instagram content and better connect with followers.