There are over 1.5 billion pairs of eyeballs on YouTube every month.

Currently, the second largest search engine on the World Wide Web has been around for a bit more than a decade. Jawed Karim, one of the YouTube’s founders uploaded the first video, titled ‘Me At The Zoo’ in April 2006.

Today, YouTube is available in 88 countries and in 76 different languages. More than 500 hours of video content is being uploaded each minute to the video sharing platform that revolutionized the way we think about online videos. Registered members of YouTube mostly use it to listen to music and share it with their friends.

Although other video sharing platforms, like Vimeo, may be gaining popularity, YouTube’s dominance seems to be unchallenged by any other music streaming or video sharing service available online. YouTube has always kept pace with the times, and for that reason, it has always played a pioneering role in introducing new video formats to the online community. In November 2009, YouTube started supporting 1080P video resolution, and seven years later, in November 2016 it became one of the first video sharing platforms to offer support for videos shot in 4K.

In November 2009, YouTube started supporting 1080P video resolution, and seven years later, in November 2016 it became one of the first video sharing platforms to offer support for videos shot in 4K. 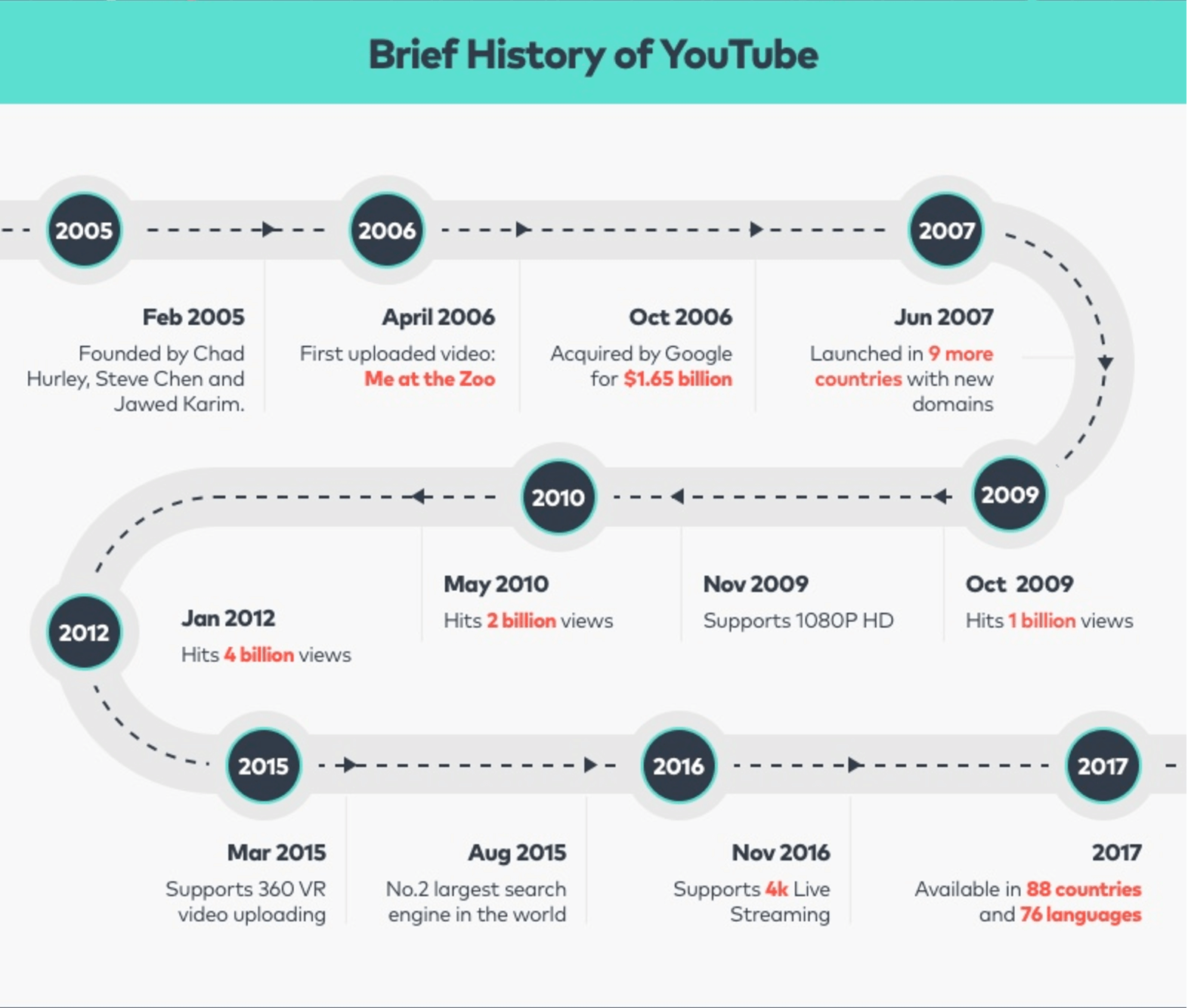 What are people watching?

The type and length of the video content on YouTube varies from short videos that feature animals and pets to some of the best-known films in history. Forty-one percent of all videos uploaded to YouTube are about people and blogs, which is a statistics marketers can smile at. Gaming videos make up 14% of the uploaded content on the site. Most interestingly, only 5% of all videos are music videos, a rather small percent considering the fact that music videos are what YouTube is famous for. 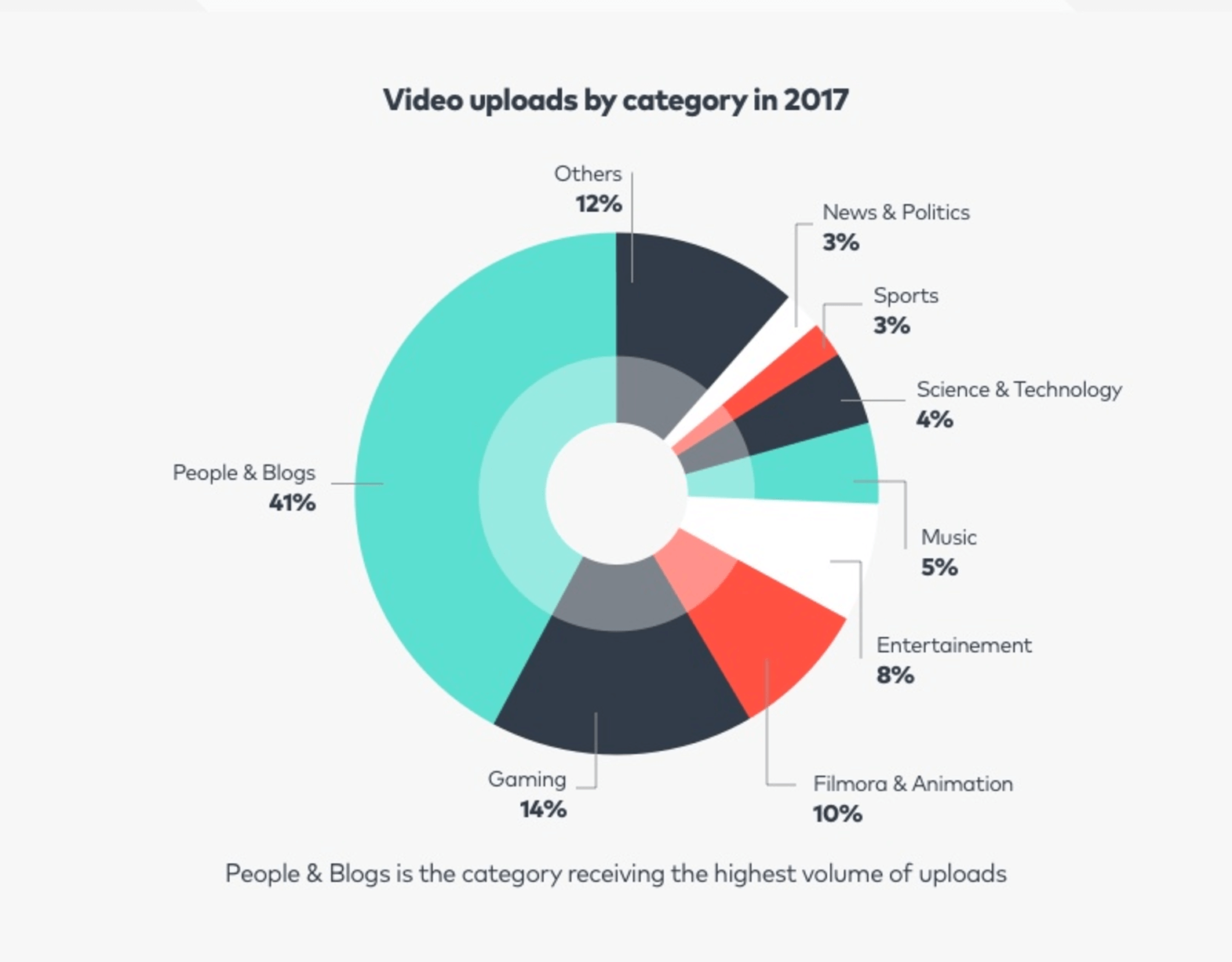 In 2017, there were 789 million searches for music and 453 million more for songs. These YouTube stats demonstrate that music videos are by far the most searched category on YouTube. Luis Fonsi’s Despacito has 3.51 billion views, while Wiz Kalifa’s See You Again has 3,01 billion, which highlights the popularity of pop music singers on YouTube. Unlike Facebook where the most popular superstars are football players and action movie actors, YouTube’s largest audience is reserved for singers.

Most of YouTube’s registered users belong to the younger generation. Twenty-three percent of all YouTube platform’s users are between 25 and 34 years old. Furthermore, 26% of users are aged between 35 and 44, while only 8% of users are older than 50. Keep these demographics and your target audience in mind when creating content to add to your YouTube channel. As for gender split, 68% of users are male and 32% are female. 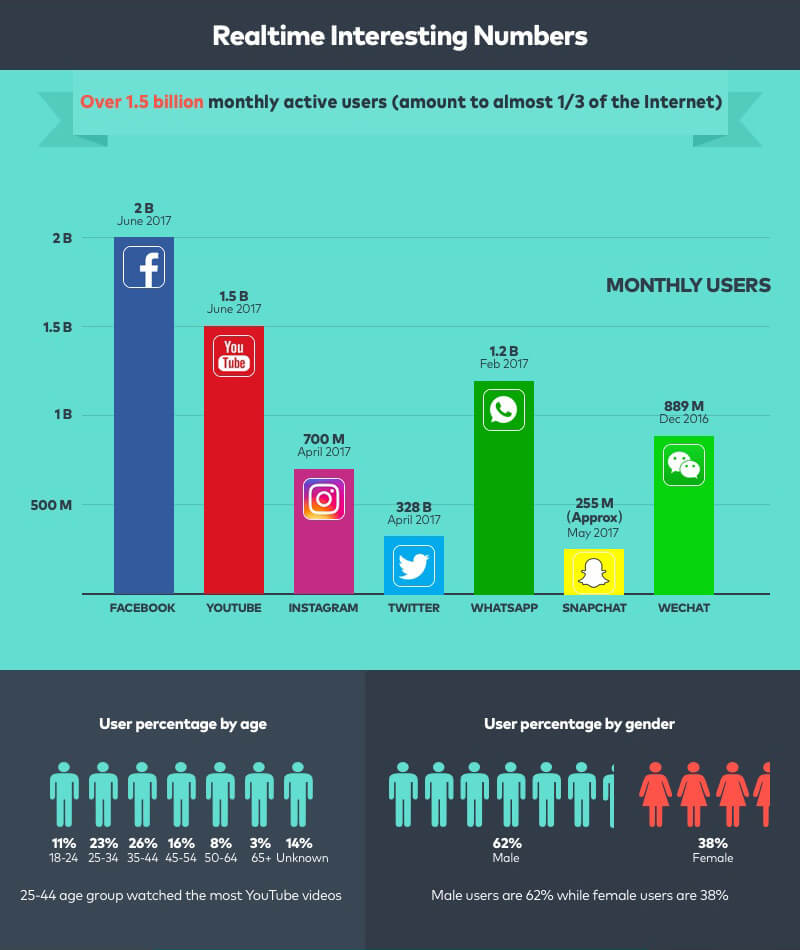 Facebook is the largest social network in 2017, with approximately 2 billion monthly users, followed by YouTube, which provides its services to 1.5 billion monthly users. Speaking of Facebook and YouTube stats, Facebook is rated as the most impactful social channel for video — 8.4X higher than any other social channel. As the focus on social engagement has shifted to video over the last 18 months, The second largest website on the internet is expected to grow. The demand for easy and intuitive ways to share video content will only increase in the future.

Marketers should note that half of 18- to 34-year old YouTube subscribers would drop what they’re doing to watch a new video by their favorite creator. Also, 40% of views on YouTube are watched via mobile devices. That’s what we call an uber-engaged audience with the means to watch their favorite channels whenever wherever. 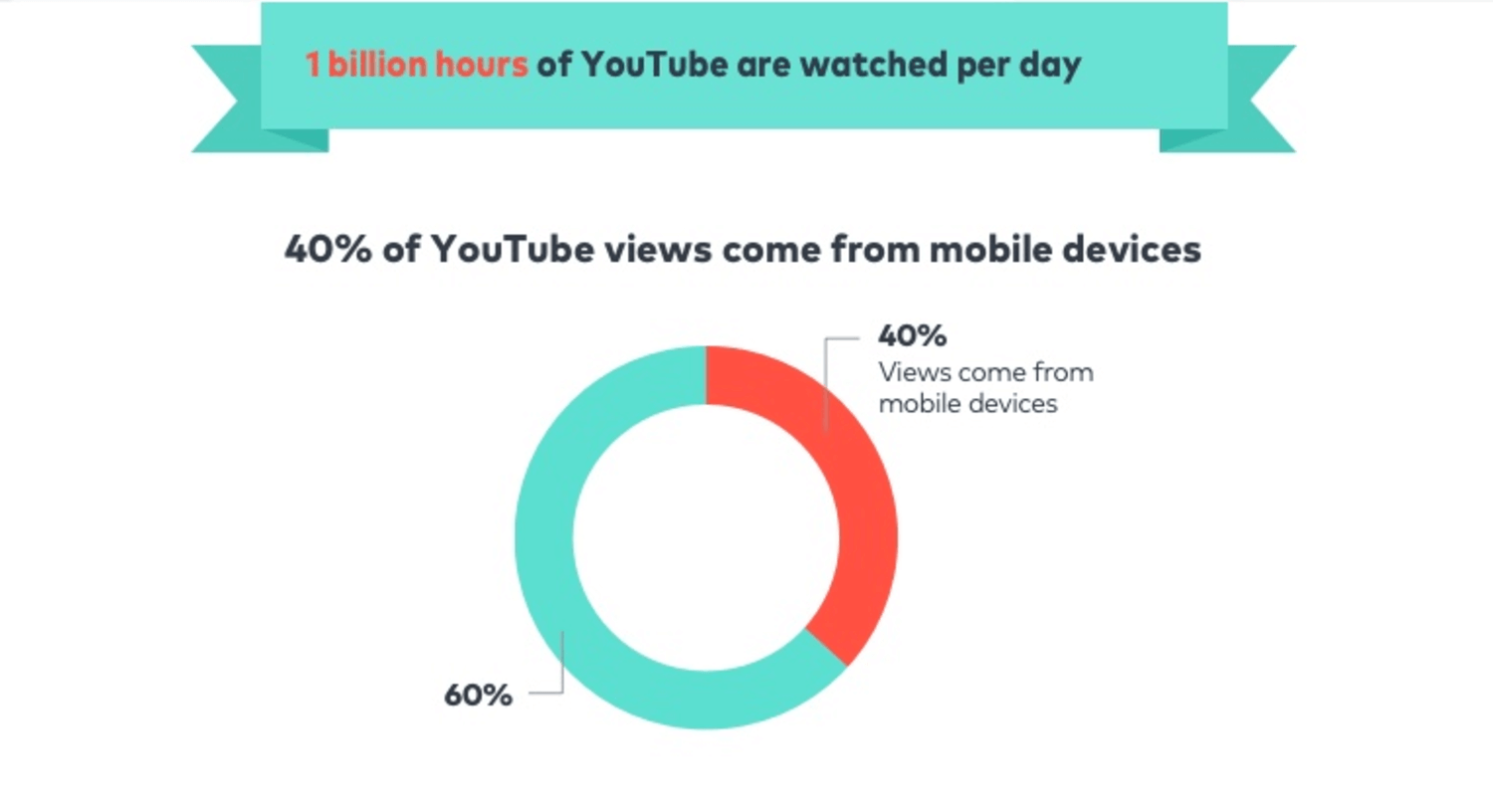 If you’re looking for a place to feature your business’ video content, creating a YouTube channel is the first step. The Filmora team has designed this latest YouTube infographic highlighting YouTube stats to help you map out your social marketing strategy. Scroll down to find more facts about one of the largest video sharing platforms ever created.

This post was originally published on October 10, 2017 and has since been updated.

Željko Dražović is a Belgrade based freelance writer who covered a wide array of topics over his career. He graduated from the Art History department of the Faculty of Philosophy in Belgrade and often writes exhibition articles related to culture, art, and mass media. His articles have been published in various print and online magazines, while he also exhibited his photographic work at home and abroad.