Whether to share campus updates, announce football game highlights, or recruit future students, Twitter continues to be a go-to platform for colleges and universities to reach their target audiences.

Higher education institutions have the lofty task of sharing relevant content with many target audiences through social media, from alumni and parents to employees and donors. But current and prospective students will always be the main audience. And given that nearly half of all tweets come from users aged 16-24, it makes sense why schools should continue to make Twitter a top priority in their social strategy in 2022.

The top colleges and universities on Twitter have proven that a variety of content types, consistent branding, and plenty of school pride are just a few elements that go into a strong Twitter presence.

If you’re looking to refresh your university’s Twitter strategy for the new school year, take note of what the top colleges and universities are doing to stand out and drive engagement on the platform.

We’re always impressed by higher education institutions on social media as they often outperform many industries across all platforms. And this year’s top performers on Twitter are no less impressive.

Here are the top 10 colleges and universities on Twitter in 2022:

Let’s look at strategies from some of the top performers.

According to our 2022 Higher Education Social Media Benchmark Report, the median engagement rate for universities on Twitter is 0.096%. When it comes to posting frequency, schools tweeted about 8.8 times per week, a little more than once per day.

Now that we have a benchmark rate to compare, let’s dive into a few examples from some of the top colleges to identify what they’re doing to generate engagement rates above the rest.

Coming in at the top of our list is Texas Southern University (TSU). One of the country’s largest historically Black colleges and universities (HBCUs), TSU outperformed its fellow educational institutions on Twitter this year thanks to a couple of star-studded posts.

Scrolling through the university’s tweets, it’s clear that TSU aims to show off the achievements of its students and staff in an effort to showcase why prospective students should consider attending. And one of the biggest recruitment tools TSU had on its side this year? Getting to claim a major celebrity as one of its own. 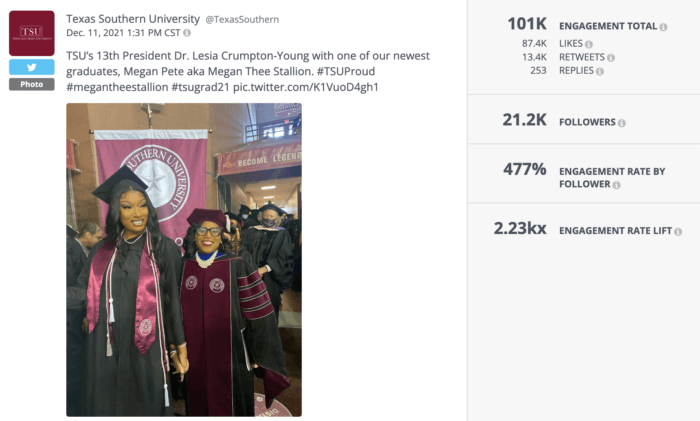 TSU’s average engagement rate on Twitter is 1.29%, but this tweet earned a whopping 477% engagement rate which was an engagement rate lift of over 2K — or about 2,000 times better than the average tweet for TSU or any of the top ten school’s on this list.

Having a celebrity graduate from your school is obviously something to shout from the rooftops, but TSU shared the news in a very organic way. The school posted a quick snap from the ceremony and even included branded hashtags like #TSUProud and #tsugrad21 to maintain the overall graduation theme, just as it would with any other student.

As if Megan Thee Stallion donning a TSU cap and gown wasn’t momentous enough, TSU had another Hollywood moment this year that helped propel the school into notable Twitter engagement levels yet again.

Drake named a song after the school (the song is literally called “TSU”) and the university shared this GIF of the rapper to acknowledge the moment. 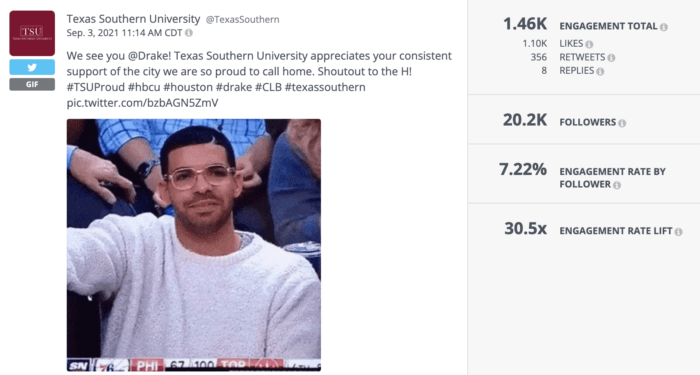 While you can’t predict whether or not your school will make headlines or be name-dropped by a celebrity, TSU makes the case for actively keeping tabs on current events and conversations and adjusting the social strategy as needed.

At its roots, Twitter is a reactive platform. Even if you’re proactive and plan most of your school’s content ahead of time, leave room for unplanned moments and be prepared to create relevant tweets on the fly.

Another top-performing school on Twitter is Alabama A&M University.

AAMU’s Twitter feed is a hub for all things university-related, from campus updates to athletic game announcements to notable achievements from both current and former students. 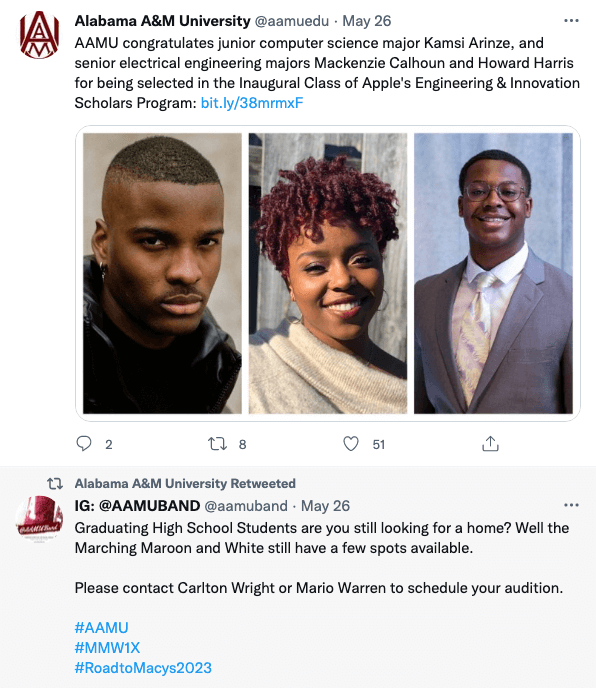 Plus, the main account frequently retweets content from other AAMU-run accounts or tweets from people who mention the school — even if the school isn’t directly tagged, which is some impressive social listening and monitoring in action. It’s clear that the school uses a mix of content types to reach a variety of relevant audiences through this channel.

What’s also notable about this top university on Twitter is how frequently it tweets.

With an average engagement rate of 0.52%, AAMU’s posting frequency could factor into that impressive rate. Posting often can increase the opportunities for the school to reach more people, engage with other accounts, and consistently get in front of current and potential students.

What’s more, one of AAMU’s top-performing tweets stood out in the feed for being a little different from the school’s usual updates and announcements. 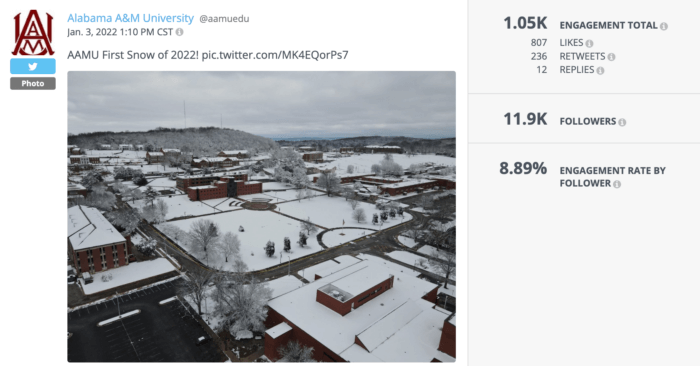 While campus glamour shots are a popular content type for schools and universities, it’s not typically a go-to for AAMU. But this snowy campus photo resulted in one of its best-performing tweets with an engagement rate of 8.89%. This post was different from the usual school updates and retweets in AAMU’s feed, but the experiment certainly paid off.

There are many lessons to learn from AAMU’s Twitter strategy. From experimenting with an increased posting frequency to trying out content that differs from the usual, AAMU makes the case for actively putting effort into one of its most engaging channels.

Athletics, namely football, is a big part of the school culture at Ohio University and that pride is evident throughout the school’s tweets.

In fact, Ohio University’s most engaging tweet this year is football related. The tweet earned a 5.88% engagement rate which is 26x higher than the school’s average engagement rate of 0.22%.

This stand-out tweet is a reference to Joe Burrow, a pro football player with ties to Ohio who played in the 2022 Super Bowl for the Bengals. Although Burrow only briefly played for the school, the Ohio University community is clearly proud of its connection to the player, as evident by the engagement on this simple yet effective tweet.

Ohio University’s other top tweets are also a reference to Burrow playing in the Super Bowl and generated high engagement rates for the school this year.

The takeaway? School pride is a very real thing among current and former students alike, not to mention sports fans, parents, and even locals. For schools that have a big fan base around the sports teams, don’t be afraid to lean into that culture if that’s what your followers engage with.

It’s also a good idea to experiment with different post types to keep your feed fresh and see what resonates most with your audience. For instance, the first example from Ohio University is a status update with no photo, video, or link to go with it — and it performed better than the second example which included an image.

Another school that performs above the rest on Twitter is the University of Tennessee, Knoxville.

UT Knoxville keeps its feed full of resourceful content that touts the achievements of its students and staff while also piquing the interest of future students, parents, and even donors, making this channel both a resource and recruitment tool for the school. 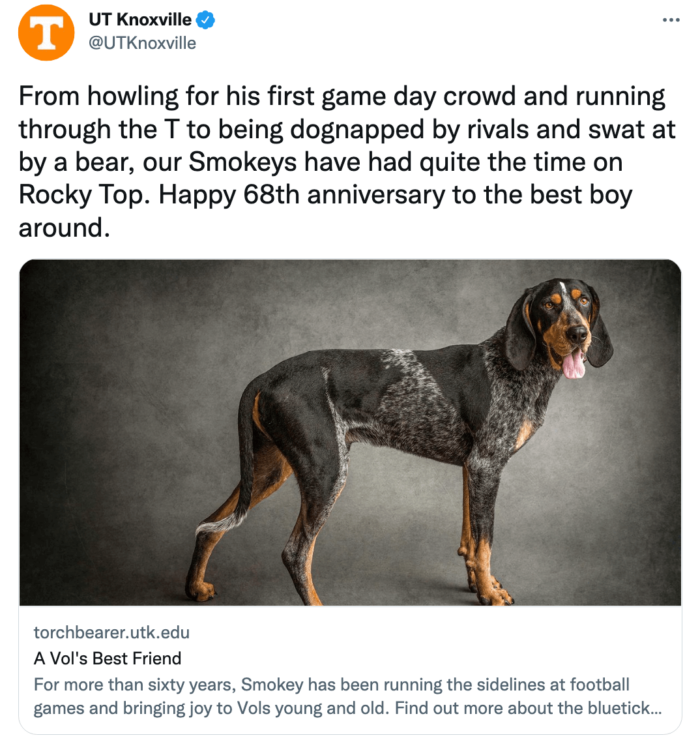 It’s also worth noting that UT Knoxville has the most followers out of all of the top-ranking schools on Twitter, so it’s clear that it has a dedicated fan base that wants to keep up with the school’s latest content and updates.

When it comes to content distribution, UT Knoxville primarily uses links to share updates and promote its community, as shown in the red box below. However, the post type that generates the highest engagement among schools and universities on Twitter is a GIF, as outlined in the blue box.

So, what happened when UT Knoxville steered away from its most-used post type and experimented with a GIF?

This GIF tweet earned a spot in the school’s top-performing posts with a 1.66% engagement rate, which is 10x greater than the school’s average rate of 0.16%.

Every school’s social strategy is different, and the best strategy is the one that consistently works for you. While links aren’t the most engaging post type on Twitter overall, UT Knoxville makes them work for its Twitter strategy. But this top-performing tweet is also proof that it can be worth experimenting with different post types, especially ones that have proven to work with the competition.

The University of Iowa is no stranger to being a top performer on social media as it has consistently dominated our higher education benchmark reports in years past. And this year, the university has stood out as a top school on Twitter.

Similar to Ohio University and other D1 schools, the University of Iowa has a strong football culture and relies on that fan pride when executing its Twitter strategy. The school’s most engaging tweets for the year are all football-related, as shown in our analysis below. 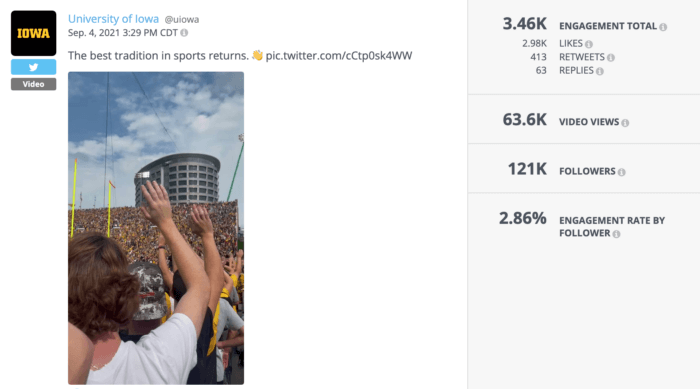 The video showcases a fairly new and inspiring school tradition in which everyone in the stadium (including the players from both teams) turns to wave at the nearby children’s hospital for one minute.

The heartwarming act is a tradition that resonates with many — football fans or not — because it humanizes the game, encourages participation from everyone, and brings an entire community together.

If you want to follow the University of Iowa’s lead, lean into traditions — especially ones that a wide audience can participate in. Most universities have traditions that are near and dear to everyone’s hearts, and Twitter is the place to amplify those traditions each year. Showcasing these moments conjures up feelings of school pride for current and former students and supporters alike.

Plus, just like the consistency of a tradition itself, consistently creating content around timely traditions gives followers something to look forward to each year.

Twitter continues to be a go-to platform for schools to share campus updates, notable events, and student achievements while communicating with a variety of audiences.

These schools set the bar high for universities on Twitter, but by taking note of what they’re doing to achieve high engagement rates on Twitter, you’ll have plenty of inspiration for how to create a winning Twitter strategy for the school year ahead.