With more than 40 million daily active users in the U.S. alone, it’s no surprise that Twitter has been a part of so many schools’ social media strategies.

Division 2 schools across the nation have been using the platform to connect with their diverse audiences, from current and prospective students to parents and alumni. Among the hundreds of D2 schools, several have risen above their peers with Twitter content strategies that are undoubtedly worth learning from.

With engaging tweets highlighting historic events, sports achievements, and more, these top-performing colleges and universities are the perfect case studies for any school looking to freshen up its tweets and boost engagement.

Got your notes ready? Let’s get started.

Before diving into the strategies behind some of the top-performing tweets and accounts, we can’t forget to give props to the higher education institutions that outranked the rest.

According to our very first Division 2 Higher Education Social Media Engagement Report, the top 10 Division 2 schools rocking it on Twitter during the 2021-2022 school year were:

These colleges and universities excelled when it came to their activity on Twitter, often outperforming their peers based on stats like engagement rate, posting frequency, or both.

With those benchmark rates in mind, let’s take a look at how some of these top institutions scored high engagements on Twitter.

Coming in at #1 in our ranking of top D2 schools on Twitter, Virginia State University proves that you don’t need a massive following to earn impressive engagements.

With just a little over 4K followers at the time of writing, VSU has the smallest follower count out of the overall top 10. Of course, that didn’t stop it from earning an average engagement rate by follower of 1.36% — the highest of all top 10 schools.

Looking at the contents of the tweet, the high engagement is certainly understandable. VSU’s proud declaration of its president being selected by the White House to serve on the President’s Board of Advisors on HBCUs had many users engaging with congratulatory remarks. 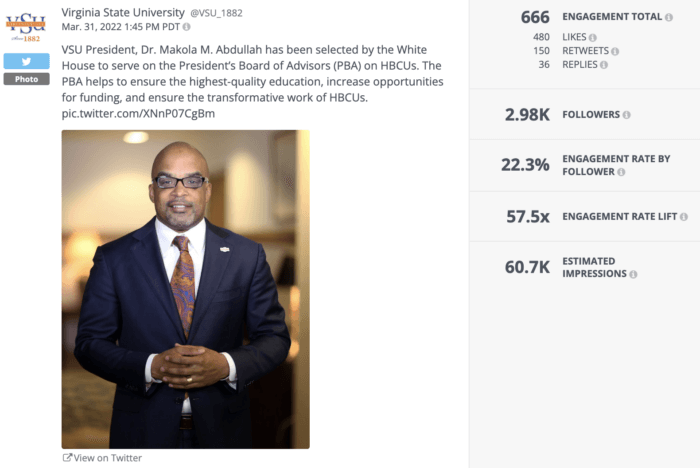 Other top-performing tweets from Virginia State University follow similar sentiments. By highlighting inspiring and historic events involving its faculty, students, or the university itself, VSU delivers news that excites its audience and drives them to engage with the tweet. 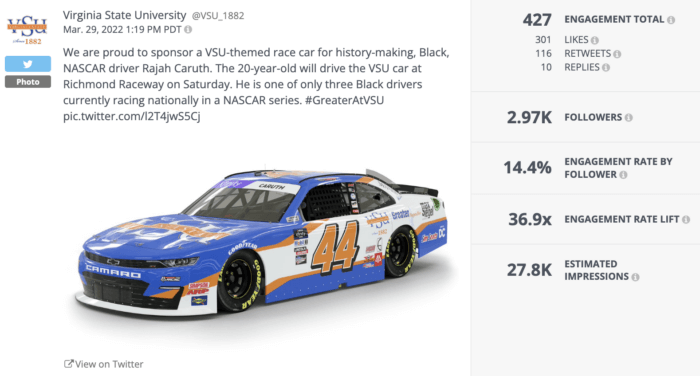 The tweet above is just one of the hundreds of VSU tweets that exceeded the median engagement rate by follower of 0.15%. In fact, a whopping 92.49% of the university’s tweets had an engagement rate greater than the median — a percentage that no one in the top 10 comes close to. Clearly, Virginia State University’s winning strategy is one to take note of.

University of Nebraska at Kearney: Getting Close for the Football Fans

Right behind VSU is the University of Nebraska at Kearney, which ranked 2nd place in our list of top 10 Division 2 colleges and universities on Twitter. With engaging tweets that play right into its audience’s love of UNK athletics, though, the school earned its place as the second-most engaging D2 university Twitter account.

About 76% of the university’s tweets had engagement rates greater than the median engagement rate by follower. In other words, 279 of UNK’s 368 tweets during the reporting period had noteworthy engagement.

How did it do this? While the University of Nebraska of Kearney uses Twitter to relay all kinds of important news about the school, its frequent, up-close-and-personal coverage of UNK football and other sports programs is the main driver behind the high engagement.

Out of its top 10 tweets with the highest engagement rate by follower, seven centered around UNK football, including the top four tweets. The rest of UNK’s top 10 tweets showed love for the athletic achievements of the track and cross-country teams.

If you’re looking to boost engagement with your audience of sports lovers, try taking a page from the University of Nebraska at Kearney’s book by tweeting exclusive footage that gets them pumped with school spirit. 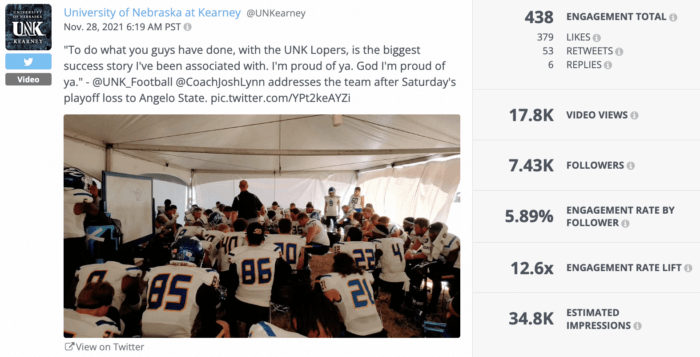 Though Texas A&M University-Commerce comes in at #3 in our report, the university can proudly claim the top spot as the most active Twitter account among the top 10 Division 2 schools on the platform. With a median posting rate of 16.5 tweets per week, TAMUC tweeted more than 3x as much as the median for all D2 schools analyzed.

All that tweeting definitely paid off. Out of the overall top 10, Texas A&M University-Commerce is also the school with the greatest total engagement.

When it comes to how well its tweets did engagement-wise, 57.38% of all TAMUC tweets during the reporting period had an engagement rate by follower that was greater than the median. Not too shabby, especially when you factor in how active the school was.

Out of the 908 tweets it posted in a year, a staggering 521 posts had an engagement rate by follower that was greater than 0.15%. To put that number in perspective, eight schools out of the top 10 didn’t even post 500 tweets during that same period.

TAMUC fills up its followers’ feeds with a range of content, from university news and campus life highlights to cheeky self-aware tweets about its social media activity.

The school’s top-performing tweet, though, is this one below, which officially announced its move to the Southland Conference and NCAA Division 1.

Six additional tweets related to this eventful change made it to the top 20 TAMUC tweets with the highest engagement rate by follower. Some were early tweets meant to generate excitement over the “mystery” announcement, while others hyped up reactions to the change. 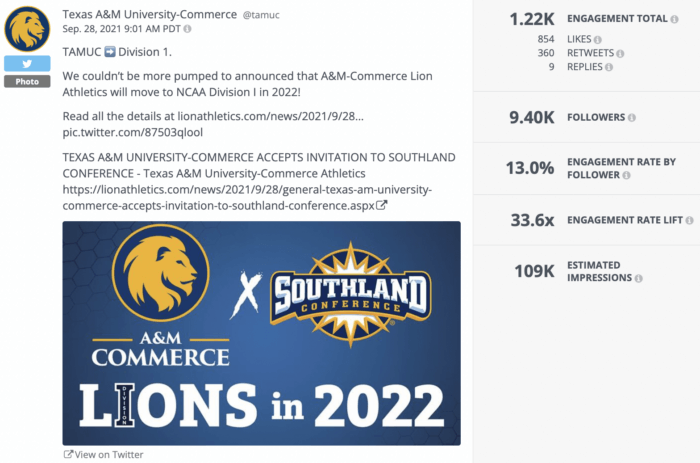 This shows how just one exciting development can spawn countless tweet ideas that can sustain your content strategy and boost overall engagement. With the university undergoing this big change, we look forward to seeing how its strategy evolves and whether Texas A&M University-Commerce makes its way onto our 2023 report of D1 schools on social media.

At #5 is William Jewell College, the small private school making big waves on Twitter. The institution has the third-highest average engagement rate by follower (0.55%) out of the top 10 D2 schools, as well as a median posting frequency of 6 times per week.

With about 4.3K followers, its small audience is clearly an engaged one, a strength that likely reflects the intimate community that the school’s small class sizes encourage (undergraduate enrollment is typically less than 800).

The institution’s impressive levels of engagement centered around tweets that celebrated all kinds of achievements made by the Jewell community, whether it’s alumni, faculty, students, or just the school itself.

One such tweet became not just the college’s top-performing post but also the tweet with the second-highest engagement rate by follower (16.8%) among all the top 10 D2 schools. Sharing the news of a Jewell alumnus being named head coach at the University of Oregon, the tweet earned likes, retweets, and comments full of congratulations and good-hearted jokes from fans.

Here’s another tweet from William Jewell College in which a nice humble brag about the school’s latest ranking earned it an engagement rate by follower that was more than 21x the median. 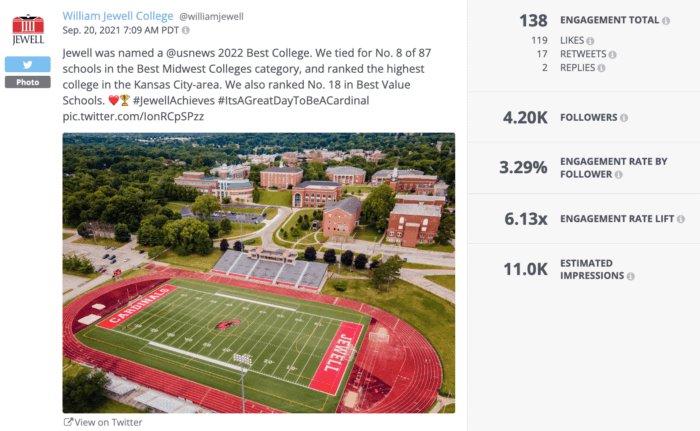 William Jewell College’s strategy is perfect for similar colleges and universities with audiences that love flexing their school’s achievements. It’s the best of both worlds — high engagement and a boosted brand reputation!

Placing 9th in our ranking of top Division 2 schools on Twitter, Northern Michigan University stands out from the rest of the top 10 for its effective use of user-generated content (UGC).

Its top-performing tweet — a magnificent scenic photo captured by a current NMU student that racked up 1.61K total engagements — was also the tweet with the 6th highest engagement rate by follower (12.8%) among all the top 10 schools. 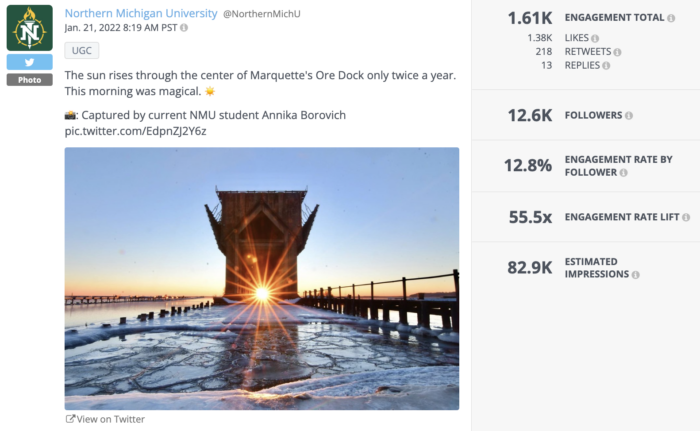 Many of Northern Michigan University’s high-engagement tweets fall under this common theme: gorgeous photos of the campus and the Marquette area taken by NMU students, alumni, or visitors. With stunning visuals that would awe anyone, it’s no wonder users feel compelled to engage with the tweets.

Overall, reposting gorgeously-captured UGC has been an effective way for Northern Michigan University to effortlessly highlight the charming university experience that it offers, further drawing in prospective students to become NMU Wildcats. 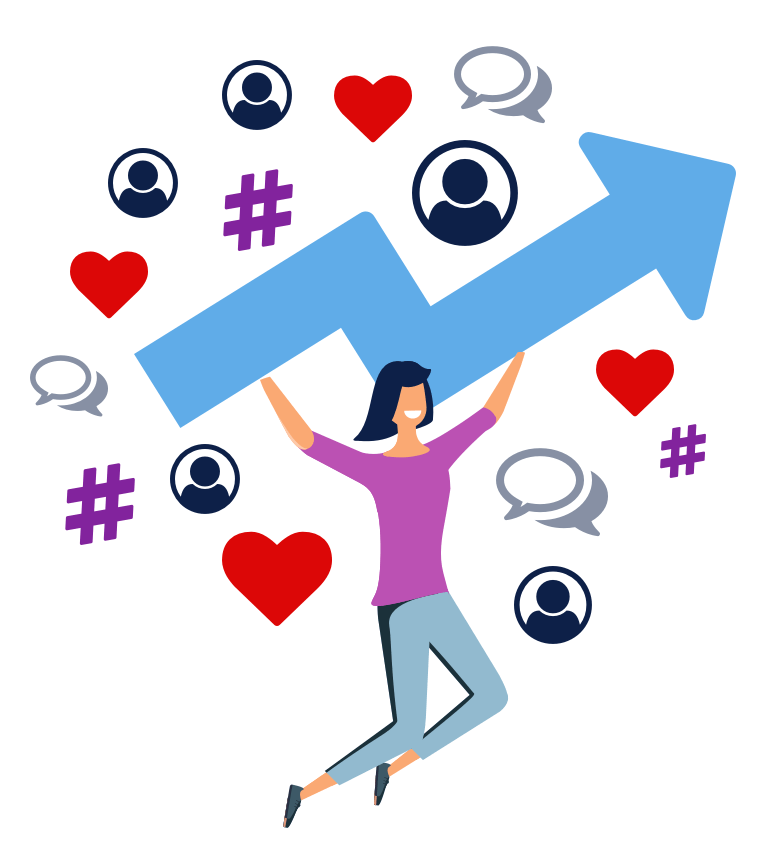 So, there you have it, folks. We hope this has been a helpful guide to how some of the top D2 schools on Twitter have used the platform to effectively engage with their audience and boost awareness of the school’s unique offerings.

If you want to refresh your own institution’s social media strategy, there’s no time like the present. Whether you want to connect with them over the beauty of the campus or come together to celebrate athletic and academic achievements, take inspiration from these schools as you craft your next top tweet.

Therese is a former marketing manager turned freelance content writer based in Dallas. Working with agencies and B2B brands, she specializes in covering the latest developments in marketing trends, insights, and strategies. When she’s not writing, you can probably find her researching her next travel destination, wrapped up in a book, or jamming to BTS’ entire discography.