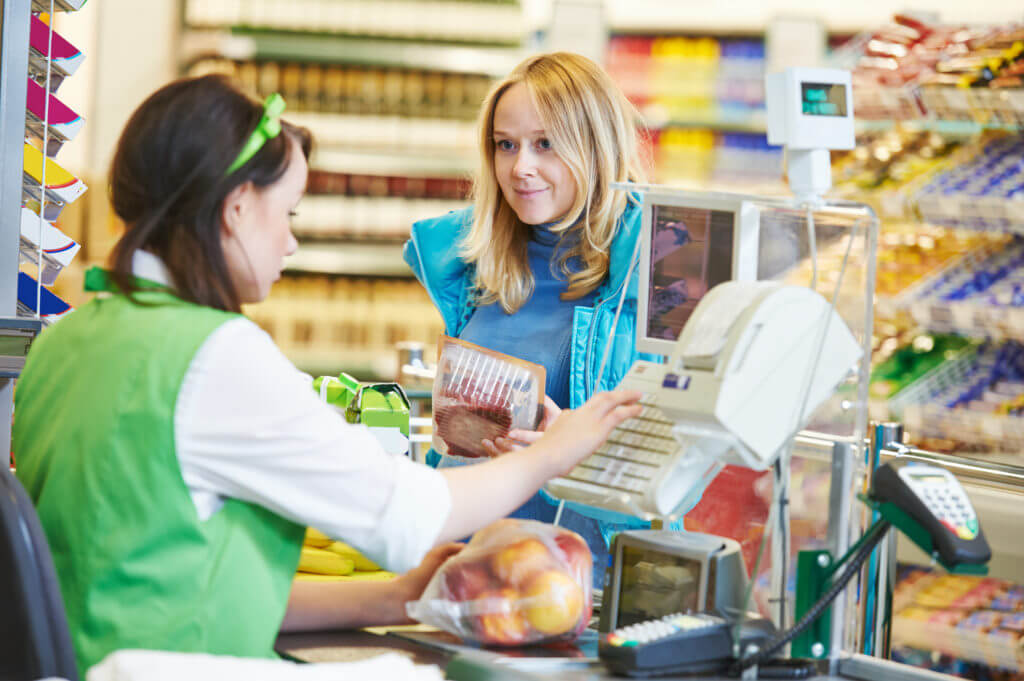 Grocery shopping is a tedious errand, but its necessity makes it a significant portion of our lives. And most people have their favorite grocery store. To find out those favorites, Consumer Reports last year did  a ranking of the top supermarkets in the U.S.  Wegmans Food Markets was ranked the No. 1 supermarket in the country by the more than 27,000 readers who rated the nation’s major grocery stores based on service, quality of perishables, prices and cleanliness. Wal-Mart Superstore was ranked last in the list of 55 chains. But how do those rankings translate into social media performance?

To find out, we put the 14 top ranked stores in the Consumer Reports survey to the Rival IQ test. For our analysis, we rated social media audience, activity, engagement and top content across six social networks:  Twitter, Facebook, Instagram, LinkedIn, YouTube and Google+.

We wanted to see if Wegmans also had the strongest social media following and engagement. Were there any surprising best practices in any of the stores’ social media performance we could learn from? (Hint: the answers are NO and YES!)

On Rival IQ, there is a paradigm called a Market Landscape, which is just a group of companies you want to compare against each other. I plugged in the top 14 supermarkets into a landscape, so I could run analytics and see who has the top social media performance and content. For the metrics, I used a 30-day span.

Publix is #1 for Social Audience and Activity

Third-ranked Publix Super Markets, which operates 1,080 stores in six southeastern states, is by far the leader for overall social media audience and activity among the 14. Clearly, by looking at the data, the main social media networks are Facebook (Audience) and Twitter (Activity), with a spattering of Google+ and Instagram thrown in for good measure. This is a fairly typical social media pattern we see for B2C (business-to-consumer) Market Landscape’s on Rival IQ.  Costco appears to have a fairly large LinkedIn audience, which most likely is comprised of its large employee base.

One best practice we can all learn from Publix is how easy it is find its social media profiles and follow Publix from its website.  Many websites have the social icons, but they too frequently don’t take you to the actual social profile, but instead, pop up a share box, or, in the worst case, go nowhere. 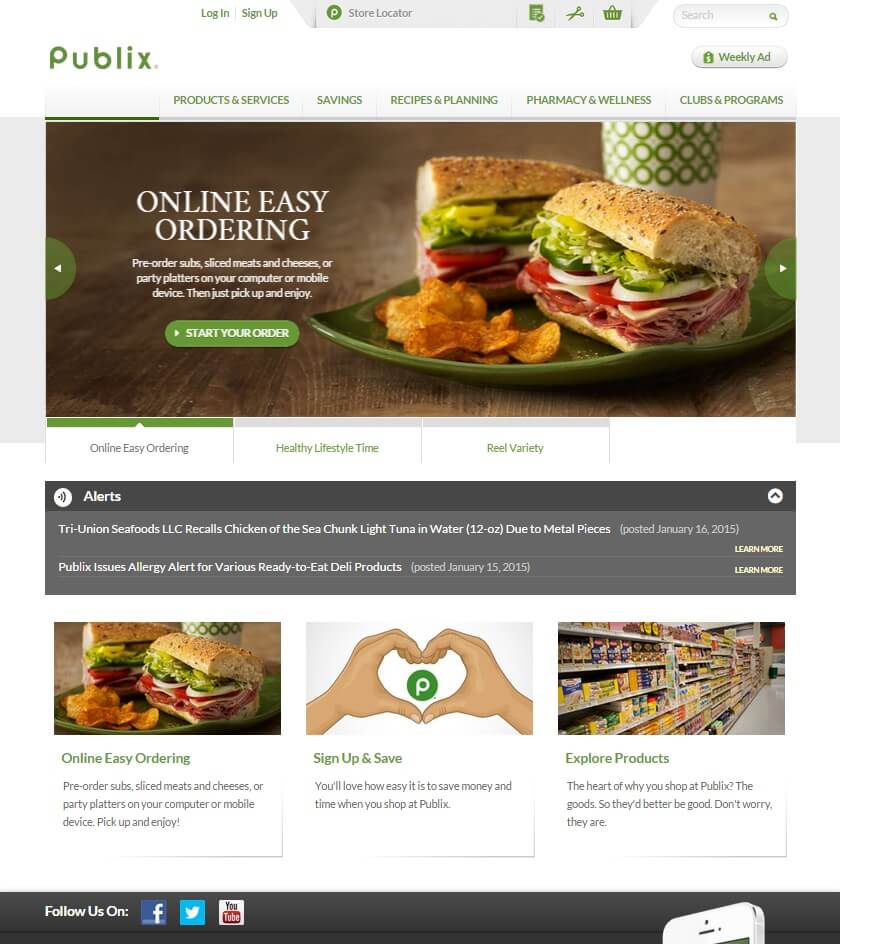 Impressingly, Publix not only has the largest audience, but it knows how to engage with them. For the supermarket that claims “where shopping is a pleasure” clearly wants to take its focus on customer service beyond the aisle to the lines of social media. Facebook is where the majority of the engagement is taking place. With a total engagement level of 131,206 over 30 days, Publix takes a clear lead. Total engagement is defined as the total number of interactions of a company’s own posts during this time period. 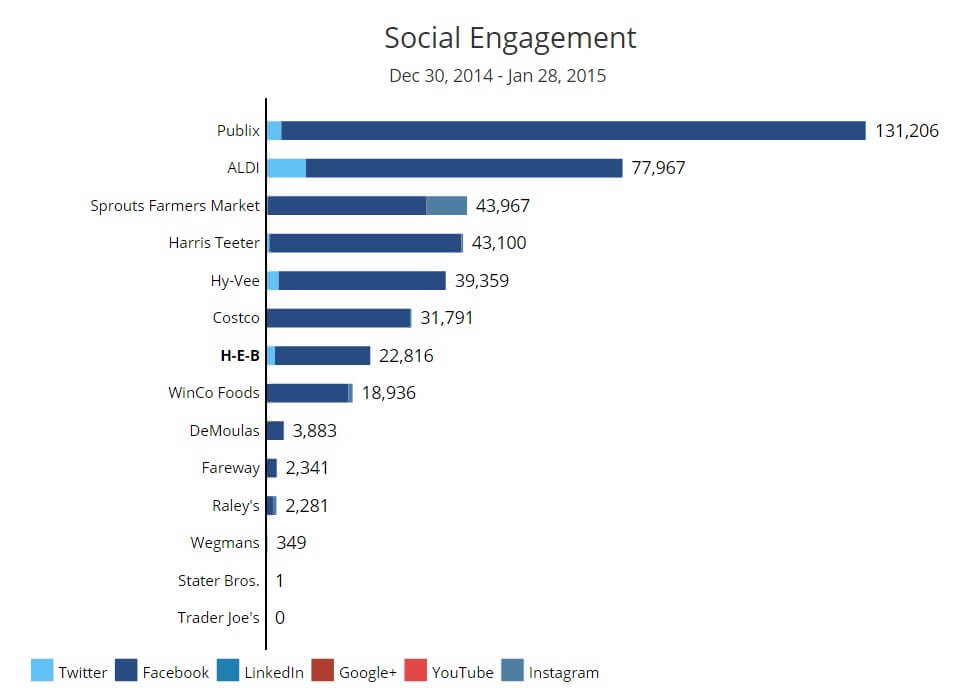 What can we learn from Publix’s posts? Its top four Facebook posts teach us a few social media best practices. 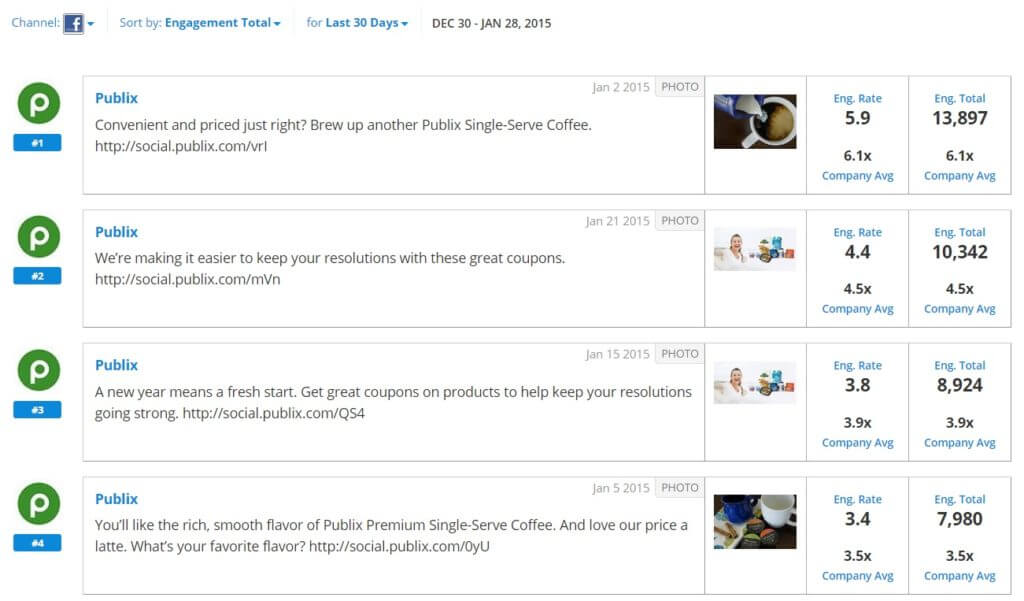 On Twitter, ALDI dominates. In fact, ALDI comes out on top whether you look at the data by Total Engagement or Engagement Rate. Engagement Rate on Rival IQ is defined as the average number of interactions (retweets and favorites), per thousand followers, of this company’s tweets during this time period. In other words, it levels the playing field so you can see how a company is engaging based on its own audience size. 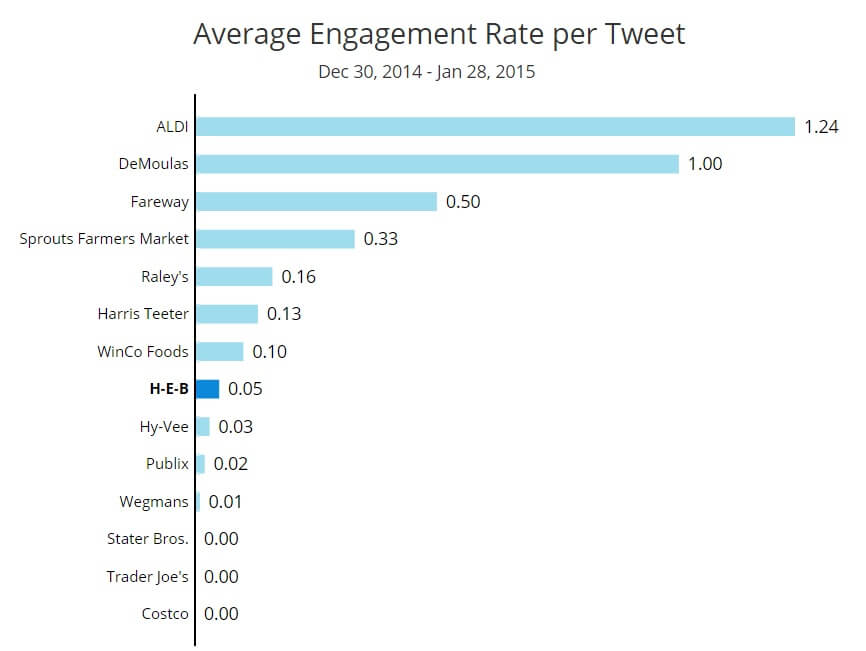 ALDI and DeMoulas are doing the best job of engaging with their Twitter followers with an Engagement Rate of over 1.0.

Wegman’s might lead the Consumer Reports ranking, but it’s engagement pulse is barely beating on Twitter, with an average engagement rate of .01.

When we analyze the top 50 tweets over the past 30 days, ALDI comes in with the most, using simple status updates and personalized hashtags to draw engagement from their followers. It’s interesting that Monday and Tuesday were the most engaging days for Tweets in this landscape. I would have thought the weekends would have brought grocery store engagement, but maybe that’s when people are IN the stores, instead of on social media! 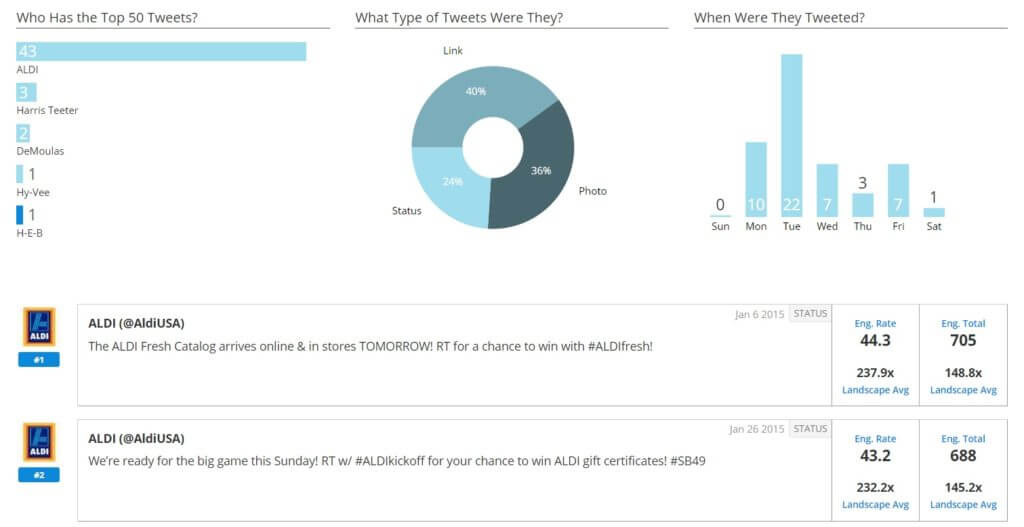 Any food lover knows he or she can count on Instagram for beautiful pictures of mouthwatering foods and dishes, but this does not seem to be true for food at grocery stores.  In fact, five of the 14 stores that made it to Consumer Reports’ list don’t even have an Instagram account – ALDI, DeMoulas, Fareway, H-E-B and Publix. Perhaps these companies prove that you don’t need to be everywhere on social media to be successful. It’s also a reminder on how we often need to focus on one of two channels and do those networks well! 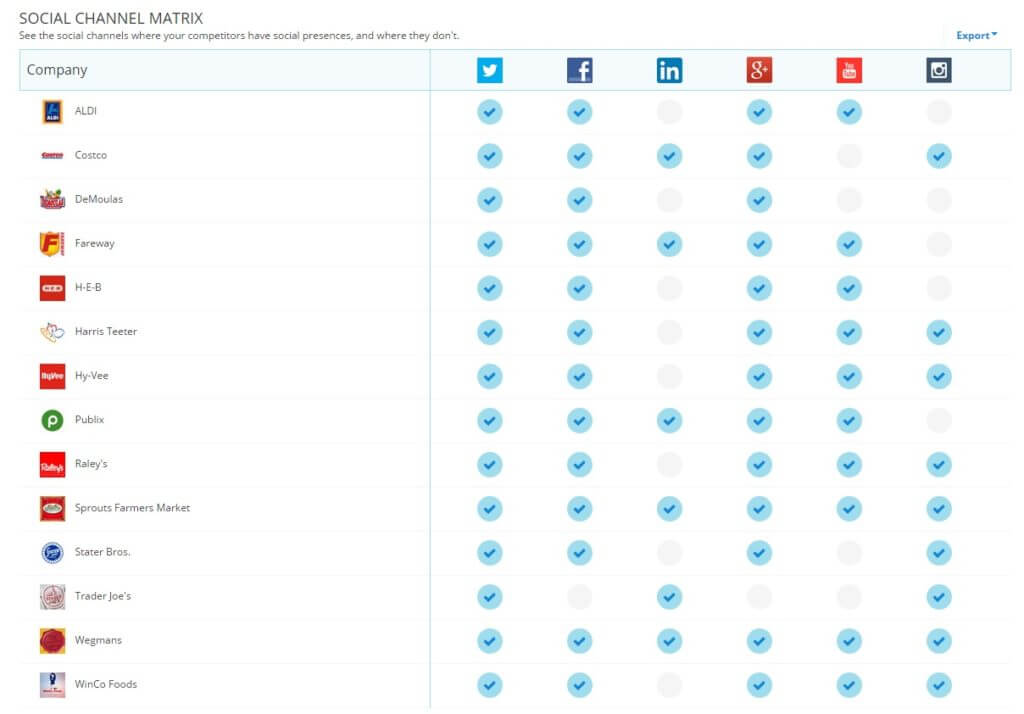 Regardless, Sprouts Farmers Market won the Instagram follower and activity game by a landslide. With more than 13,000 followers as of Jan. 29, this supermarket isn’t holding back in terms of social photography. Furthermore, its efforts are not going to waste – Sprouts has seen its following on Instagram grow by 33 percent over the past 30 days. Could this translate to more foot traffic in its stores?

Sprouts Farmer Market is in the lead for both Instagram audience and activity. And what’s up with zero posts from others?

Sprouts Farmers Market is also winning the most engagement on Instagram. So while it may not be showing up as a leader on Facebook or Twitter, it is focused and building community on Instagram. Well played! And notice the strong use of hashtags, which are a must on Instagram! 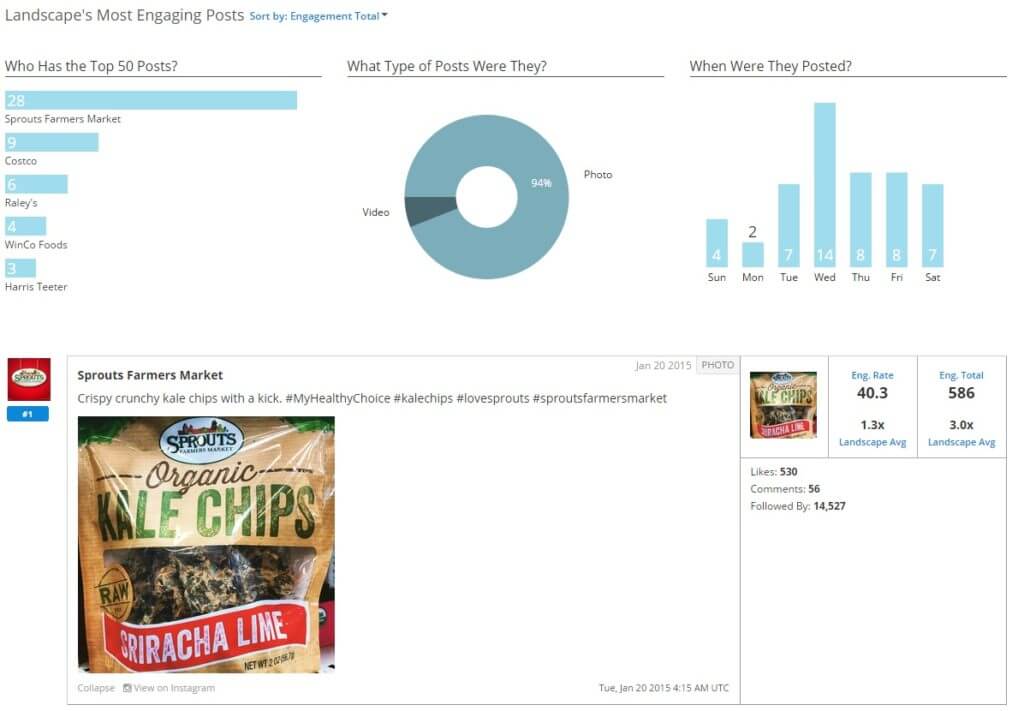 As consumers continue to play favorites, it may just be the physical shopping experience that has a true impact on their choices, rather than what they see on social media. But if these supermarkets are smart, they will see social media as an extension of their physical stores and work to build community across both. Done well, the physical and digital worlds can not only complement each other but make the business stronger overall!