How to Increase Your Brand’s Social Media Engagement

Posted by Danielle Prager on September 12, 2013 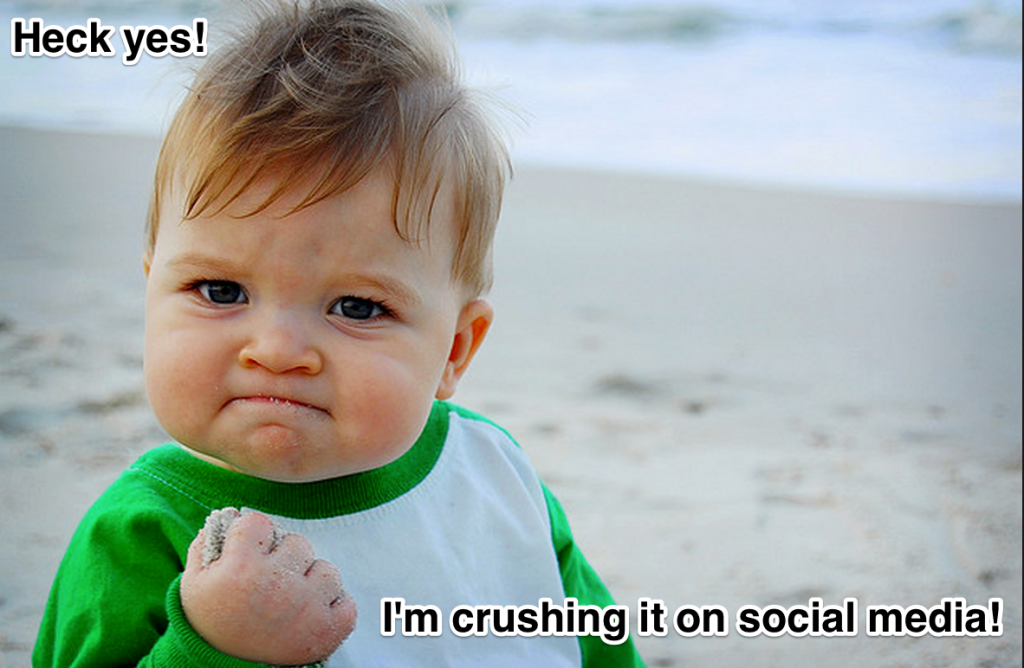 Are your social media efforts working? It’s so easy for us to become hyper focused on the creation and execution of an elaborate social media strategy that we often fail to check and see if our attempts are even resonating in the market. In today’s post, I’ll be discussing an alternative route to revamping your social media strategy. In order to avoid thoughtless experimentation, I’ll teach you how to research both your own and your competitors’ previous social media attempts, so that you can incorporate what has been successful in the past into your future plans. It’s time to work smart so that that the time and effort spent on your strategy and actions pays off with social media engagement!

Learn From Your Own Successes And Failures

The starting point for a social media revamp is reviewing your past efforts to see where you were crushing it and where you were being crushed. As an Orlandoan and a self-confessed Disney aficionado, I’m going to be using the majestic Disney as our focus company. Basically, instead of imagining I’m Cinderella, I’m going to imagine I’m in charge of Disney’s social media department.

The process of reviewing your past efforts can be done in 3 easy steps:

While the entire purpose of this post is to teach you how to revamp your social media strategy, the chances that you’ve done nothing right in the past are pretty slim – so take some time to locate where your engagement rate has shot up in the past few months. This will give you insight into what kind of content you should consider posting more of in the future. You can do this by visiting each of your social media channels and creating a spreadsheet of engagement for each and every post.

Tracking each and every post in a spreadsheet gets the job done, but it’s extremely time consuming.

This process will essentially get the job done, but it’s unbelievably time consuming – and as a general rule of thumb, I avoid spreadsheets like the plague. Fortunately, Rival IQ (yes, this is a shameless plug) allows you to see the peaks and troughs of your social media efforts with little to no effort at all – it’s practically magic! 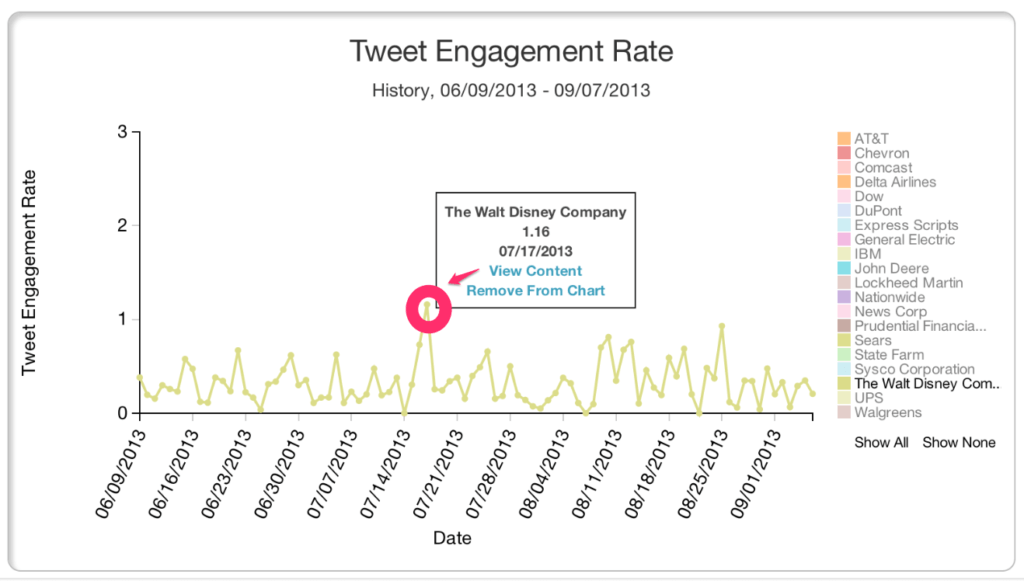 Locate which of your past posts have received the most engagement.

Now that you’ve determined the peaks, the obvious next step is to determine which posts are responsible for the peaks. I find that the best measurement of success on your own social media posts is total engagement (the sum of retweets and favorites). Let’s look at some of Disney’s most successful tweets.

Determine what kind of content has been successful in the past. Please click for full size image.

Looking at Disney’s most successful tweets, it’s clear that incorporating hashtags, pictures, and famous movie quotes is really paying off!

Learning from your failures is arguably more useful than learning from your successes – that’s why the second step in reviewing your past efforts is determining which posts are responsible for the low points in your social media strategy. Let’s take a look at some of Disney’s Twitter fails.

Learn from the tweets that received low engagement in the past and avoid posting similar content in the future.

As you can see, there is a definite trend among these three tweets. For starters, they all received very low engagement rates compared to the top tweets we looked at earlier. More importantly, it seems that Disney’s Twitter followers are not the biggest fans of promotional tweets. While there is certainly a time and place for promoting on Twitter – these tweets should still encourage your followers to engage.

My recommendation for Disney? Try adding a question at the end. For example, “#MuppetsMostWanted comes to theaters March 2014. Watch the teaser trailer: *link* Who’s your favorite muppet?” By simply adding a question, Disney promotes the Muppet movie, encourages engagement, and I’d make a bet that the number of people who’d actually click the link would increase.

Step 3: Put the pieces together

Now that you’ve determined which content is responsible for the highs and lows in your past efforts, the final step is to list out what you should be posting more of/less of in the future. It’s important to note that you should do the previous two steps with each channel you are active on, because trends in content differ based on the channel you are posting to.

As a basic guideline, refer to the lists below to determine what content generally does well on each channel.

Now that you’ve reviewed your own past social media efforts, it’s time to do a little friendly competitive research. The first step? Figuring out which of your competitors should be on your radar. Look for who’s winning in your space – then begin the following four step process:

At the end of this process, you should feel comfortable saying (as Charlie Sheen so eloquently put it):  “Every day (on social media) is just filled with just wins. All we do is put wins in the record books.” 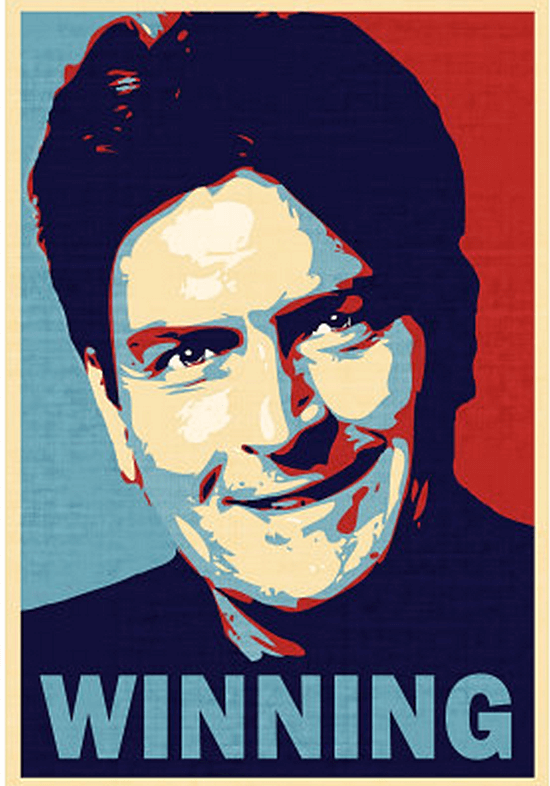 In order to begin determining who your social media “role models” are, look at how many likes each of your competitors has. This is a fairly good way to figure out who has the most successful social media strategy (and who you should consider “borrowing” from). In a moment, we will talk about why the number of likes alone isn’t the greatest way to determine who is a Facebook superhero – but in the meantime, since Disney is awesome enough to be in the top 100 of the Fortune 500, let’s look at how Mickey compares to the rest of the top 100. 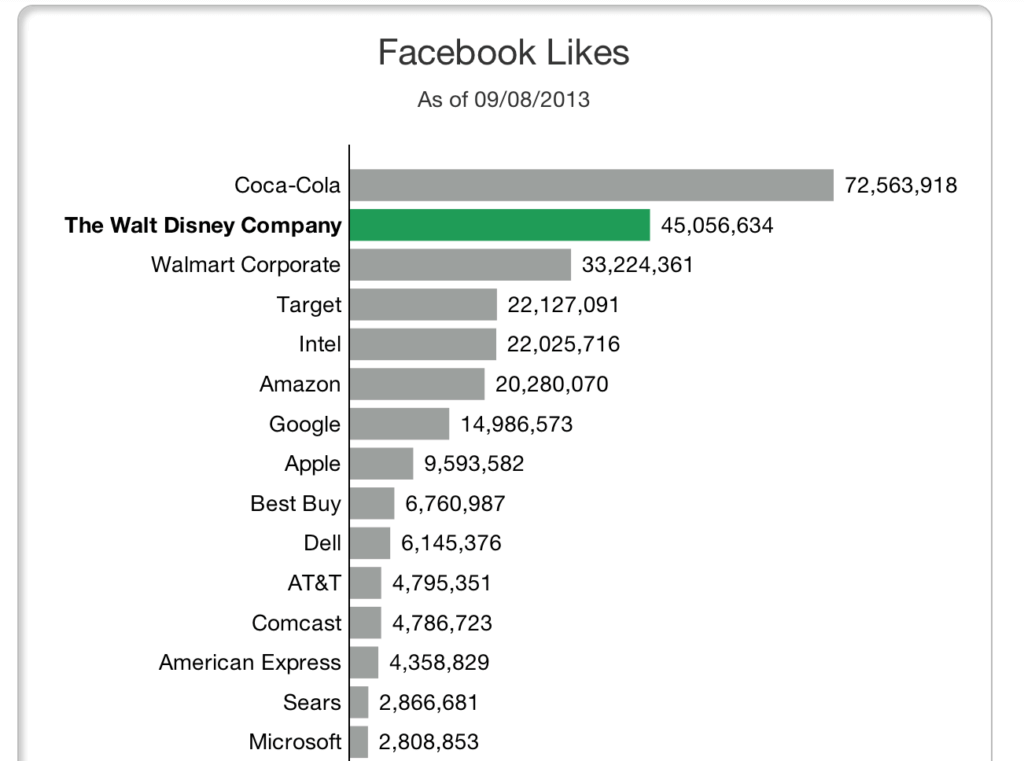 Facebook likes are a fairly good way to determine who has the most successful social media strategy.

Number two – not too shabby, Disney! Based on likes alone, it looks like people are huge fans of Mickey and his friends. Regardless of Disney’s high positioning, they should still keep their radar on Coca-Cola, Walmart, Target, and Intel.

I mentioned that follower count is a fairly good way of measuring success on social media channels. However, it’s also important to consider engagement rate. Having a lot of followers is just good and dandy, but what’s the point if none of them are engaging? Facebook’s algorithm, EdgeRank, places a great deal of importance on engagement. Basically, if you want your company updates to appear in your followers’ news feeds, you need to get them commenting, liking, and sharing your content – and what better way to find out how to get people engaging than by seeing which of your competitors is doing it best? 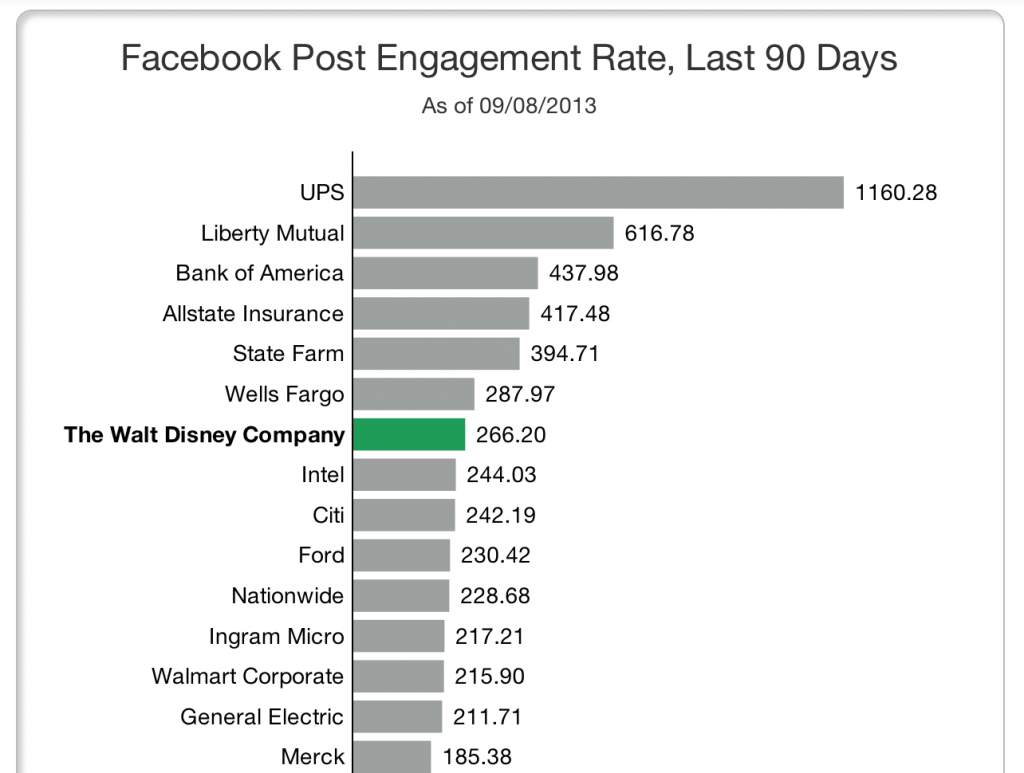 While Disney is doing much better than the rest of the Fortune 100 at gaining followers, it’s clear that they dropped down a few spots in engagement. The next step on the journey? Figuring out why these top ranked companies have such high engagement rates.

To discover what content is most successful at engaging followers, locate your competitors’ posts that yield the most engagement. I think that post engagement rate (the number of likes, comments, and shares of posts on this company’s Facebook page, per thousand page likes) is the most useful measurement for researching your competitors. 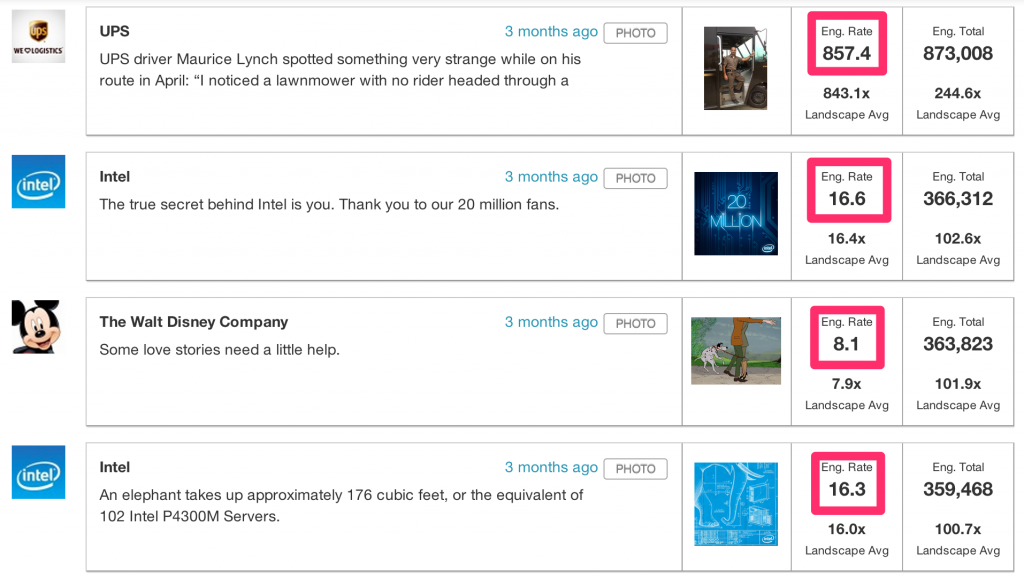 The four most engaging posts from the Fortune 100.

By simply scanning the four posts above, I’ve quickly arrived at a few very useful conclusions:

Now I’m about to teach you a very valuable lesson in engagement, so get ready for it: People love to have their heart strings pulled at. The reason I’m such a huge Disney fan? Because nothing else makes me weep such embarrassing tears of joy like the ending of Cinderella – she gets the man AND the shoes!

Remember that number one engaging post by UPS I just showed you? Well here it is expanded: 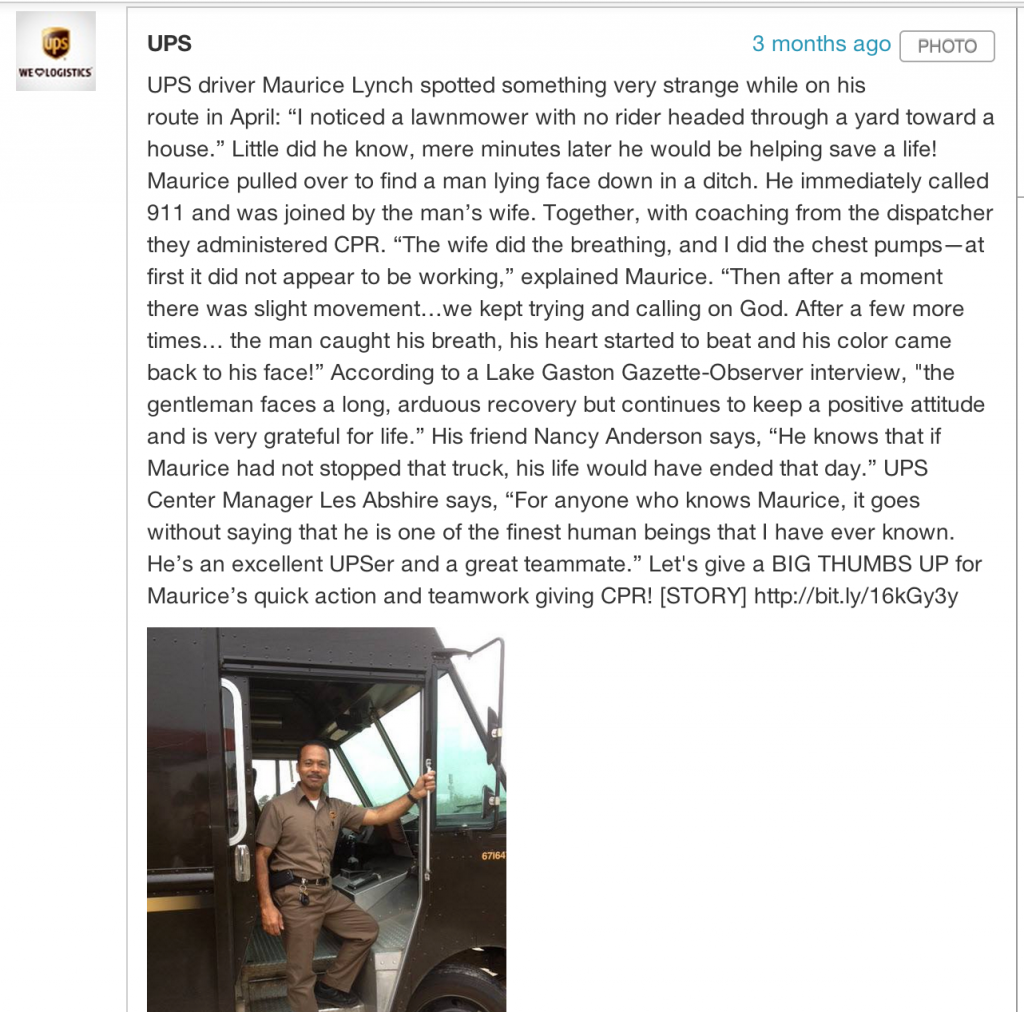 If that story doesn’t make a person feel all warm and fuzzy inside, then (???they have no soul). UPS posts these stories on their Facebook very frequently, and they always get an enormous amount of engagement (this post was 843.1x more engaging than the average Fortune 100 post in the last three months!). In a similar heart wrenching post by UPS, one of their follower’s responses confirms just how much people love a good story.

Another important thing to take note of is that UPS asked their followers to “give a big thumbs up for Maurice”. Remember when I told you earlier that simply asking followers to like, comment, and share significantly increases engagement? Well here’s a perfect example!

If you’re one of those overachievers who wants to get fancy, you can dive really deep into the research by ranking best content based on comments, likes, or shares.

Sort top content by comments, likes, or shares for the most comprehensive understanding of what content really works.

If your posts are consistently getting likes but aren’t often shared, you can research what your top competitors are posting that promotes a lot of sharing. Likewise, if you are getting a lot of comments but that little like button isn’t getting any love, get inspired by your competitors’ content that is irresistibly “likable”. As you can see, the solution to your social media frustrations are just waiting for you to find them!

At this point you’ve completed all of the research necessary for revamping your social media strategy. Now for the fun part: Putting what you’ve learned to use! 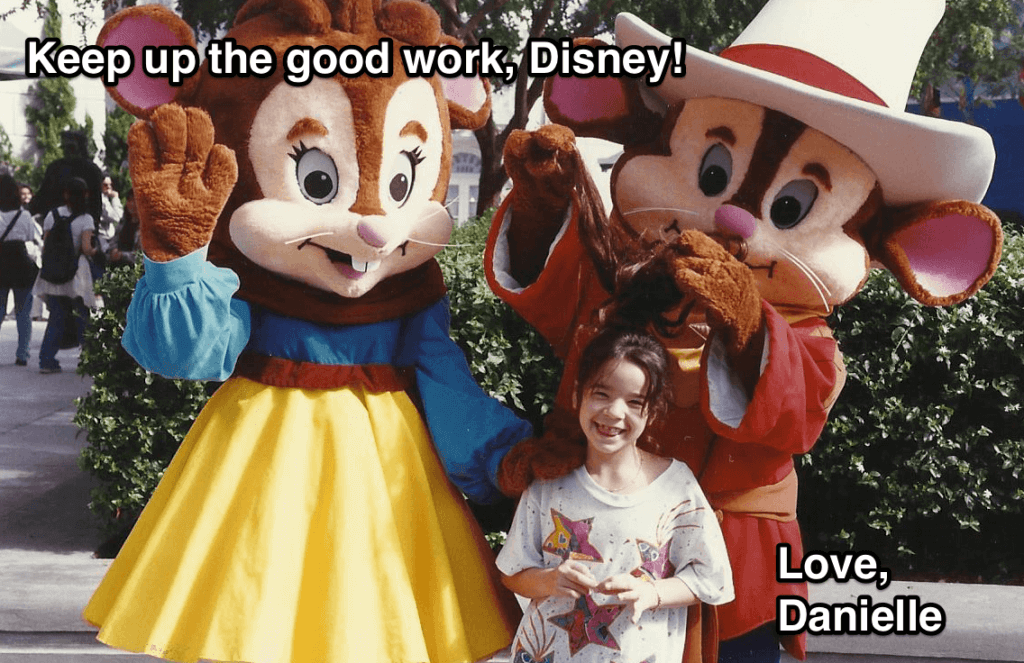 Be sure to remain consistent in reviewing how your social media efforts are paying off. More times than not you will have to tweak things here and there to ensure that your efforts continue to be successful. It’s also good practice to regularly check in on what your competitors are up to on their social channels. If things are working for them, they will likely work for you too!