Social Media Hashtags: the Good, the Bad, and the Ugly

Twitter has grown into an enormous microblogging community with a unique culture and distinct style. And a key component of Twitter’s success is . . .the hashtag! Ah, how we love that little waffle shaped symbol that allows us to filter tweets and emphasize certain topics.  And it has expanded from Twitter with social media hashtags now serving as a key part of nearly all channels.

However, as time has gone by in the social media world, it seems the hashtag has taken on a new role. Annoying and useless hashtags, and long strings of words held together by a hashtag, have become common occurrences – and slowly but surely, these annoying hashtags overwhelm the ones we once considered useful.

So what’s the deal? When did hashtags go from being practical to pain in the neck? And is there still any profit to be gained from using them?

I believe the answer is: While some hashtags now clutter the cyberworld, there are still powerful and productive ways they can be of use to your marketing strategy – particularly when it comes to engagement and raising brand awareness.

Before I get into hashtag best practices, I think it’s important to explore the history of the infamous hashtag, starting with its original function.

The History of Social Media Hashtags

According to Twitter legend, the first person to propose the hashtag was a Mr. Chris Medina (factoryjoe), self titled the “Hash Godfather”. It was on August 23, 2007 at 12:25 PM that Medina introduced the first hashtag to the Twittersphere.

There had been continued conversations on different forums and blogs proposing ways to eliminate the noise within Twitter – and after receiving a lot of positive feedback on his suggestion, Chris Medina decided to expand on his hashtag idea and posted a proposal that would stick.

There you have it – the birth of the Twitter hashtag, a system that would allow Twitter users to tag topics and easily search for and engage in conversations of interest. After a continued expression of frustration with how noisy Twitter could be, Messina’s proposal struck a chord – and as we now know, it struck it hard.

Originally intended to assist with content filtering for the average Twitter user, over time the hashtag’s function evolved into a much larger umbrella. Companies used them to encourage conversation amongst their customers, answer customer service questions and even hold competitions. Hashtags even found their way into the political world during the 2009 Iranian election protests.

The Dark Side of Social Media Hashtags

Fast forward a few years, and it brings us to today – hashtags are EVERYWHERE, and, as I mentioned before, a lot of the time they are just plain ridiculous. I swear, I feel like everyone around me has decided to become very active members of a secret club called “#AnnoyDanielleWithRidiculousHashtagsSociety”.

Let me list off a few of my biggest pet peeves when it comes to hashtag use, and I urge you to avoid them like the plague:

#Hashtagging #Every #Single #Word: If someone is hoping to gain new followers by hashtagging every word in their tweet, I have two things to say:

#hashtaganobnoxiouslylongstringofwords: I understand that people aren’t generally using hashtags for search reasons, which may lead some to think that this behavior is OK – but it’s not. Please just type out the words like the English language intended, with spaces.

Using hashtags on sites that do not support them: What’s the point? If the site doesn’t support hashtags, then why are people using them? If I missed the memo, please let me know, because I’m very confused.

Using hashtags in “real life”: This one KILLS ME. Listen, I’m not a violent person at all – but if I’m having a face to face conversation, and the person I’m conversing with says something along the lines of, “We should go on a weekend get-away. Hashtag YOLO!” – I will have to try very hard to resist the urge to slap some sense into him/her. Straight shooter Regina George puts it perfectly: 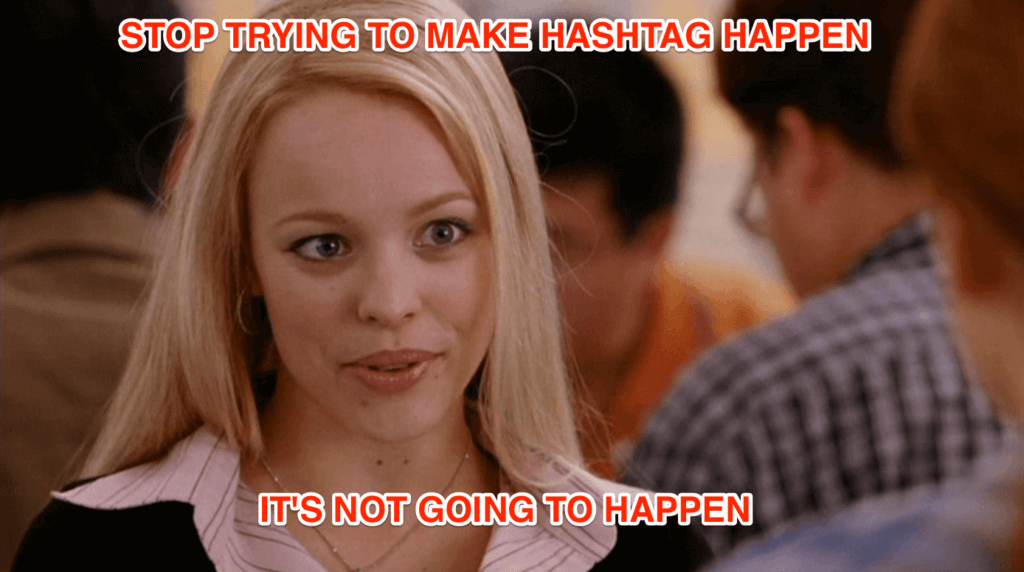 Never use hashtags in face to face conversation. It’s just not right.

How Hashtags Can Be Helpful

By now, it should be clear from my examples above that hashtags have taken on an additional role of being (what some might think is) “cute” or “ironic”. However, the real question is whether hashtags are still useful or just a nuisance.

To be honest, when I initially came up with the idea to write this post, I had the full intention of “bashing hashing” so hard it would make Muhammad Ali proud. But low and behold, after much research, I’m here to say loud and clear that the hashtag is not dead.

However, while there are certainly a number of great and effective ways to utilize the hashtag, there are equal (if not more) ways to destroy your marketing campaigns, reputation, and customer relationships – so be sure to tread gently and be cautious with your hashtag use.

As I continue on my marketing journey at Rival IQ, I am constantly frustrated by one thing more than anything else: How the heck do I get people to engage with me on Twitter? I often find myself with my face in my palm and my brow furrowed, leading to two problems: premature wrinkles and a very frustrated and confused Danielle. But as luck has it, an answer came to me as I did research for this blog post: get your followers engaged and conversing with a Twitter campaign!

If there is one company that proves how successful a hashtag can be, Sharpie takes the cake. Sharpie did a little research and found that their younger market expressed great interest in self-expression. With the help of a Twitter campaign, Sharpie embarked on a journey to align their brand with artistry and creativity.

Implementing promoted tweets with topics such as music, art and writing, Sharpie encouraged their followers to tag their conversations involving creativity as well as their artwork with the hashtag #Sharpie. 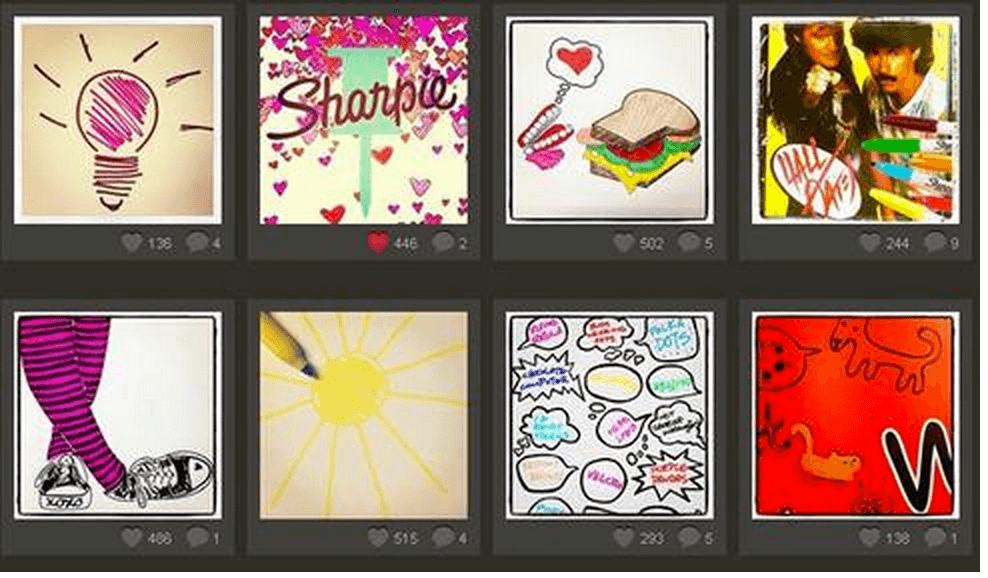 By using the hashtag, not only did Sharpie get people conversing and having fun, but they also promoted brand awareness. Their efforts resulted in a successful hashtag campaign, increasing the number of Twitter followers by 600%, with more than 1,000 new followers a day.

There are a number of points to take away from Sharpie’s story:

While #sharpie is a great hashtag success story, don’t be fooled into thinking that social media hashtag campaigns are idiot proof. Let me start off with an example of a hashtag that went horribly wrong – we’ll call it the “Mcdonald’s #McDStories Bashtag”.

In January 2012, McDonalds started the #McDStories Twitter campaign. The campaign’s objective was to brighten the company image by sharing positive stories from McDonald’s suppliers. It started out with Mcdonald’s tweeting pictures of their “hard-working people dedicated to providing McDs with quality food everyday”, accompanied by the hashtag #McDStories.

The beginning of the #McDStories disaster.

While the campaign was intended to benefit the company, the chaos that followed did everything but promote its brand. People began using the #McDStories hashtag to describe all of their awful experiences at the apparently not so Golden Arches. One person creatively tweeted, “One time I walked into McDonald’s and I could smell Type 2 diabetes floating in the air and I threw up”. Another tweeted, “These #McDStories never get old, kinda like a box of McDonald’s 10 piece Chicken McNuggets left in the sun for a week”.

It’s important to learn from the mistakes of others – so what exactly can we learn from McDonald’s? The key mistake the McDonald’s marketing team made was neglecting to consider every possible outcome of their campaign. With documentaries such as “Super Size Me”, and news stories reporting the use of “Pink Slime” fillers, McDonald’s has attracted the media’s attention for years.

If they had just taken a minute, even a second, to think about the possible repercussions of their campaign, this “crisis” could have easily been averted. The fact remains that while people may deem that “M” golden, if it stood for marketing, it wouldn’t even take bronze.

In addition to what I’ve already discussed, there are other great ways to incorporate hashtags in your marketing strategy – competitions, live Q+A’s, and Webinars are some good examples. With that being said, be sure to remember that hashtags have the ability to blow up in your face – so be cautious and frugal with your hashtag use.

Let’s review some key points to ensure your marketing safety.

What are your thoughts on hashtags? Do you consider them harmful or helpful to your marketing strategy? I’d love to hear your opinions so be sure to leave your thoughts in the comment section below.