Develop in Double Time With Node.js plus Streamline

From day one at Rival IQ, we bet on Node.js as our core platform. We found Node, with its JavaScript expressiveness and its simple concurrency model, to be more productive than previous generation platforms; and yet, due to its complex control flow and awkward error handling, way less productive than it could be! This led us to choose Streamline as a key companion tool.

How does Streamline help with Node?

Streamline elegantly addresses these Node weak spots and provides substantial incremental productivity gains. This blog post explains how we made these decisions, and why I encourage you to look at this pair of technologies too if you are building applications.

The top 3 advantages of Node.js

So first, why Node? Node has a number of compelling aspects, including a great package management system, a speedy runtime, and an active and rapidly growing community. However the Node attributes that resonate the most with me concern developer productivity.

Coming from building previous large scale systems in Java and C# (and C++ before that), I saw three huge advantages:

When I designed the Active Server Pages platform at Microsoft in the mid-nineties, it was all about letting you use languages like VBScript and JavaScript on the server side, within a concurrency-managed container, in order to make web application development easy (and the data say we succeeded in creating a productive environment with ASP). So Node is like coming home to me… a much more powerful home that is! 😉

There remain some challenges

All told, I like many things about Node; but that said, Node isn’t perfect. Nothing is. Some of the challenges we’ve faced have to do with the relative immaturity of the platform. The tooling, while constantly improving, is still weak in some areas. (If you’ve had to track down a non-heap memory leak for example, you’ll know exactly what I mean.)

There are still breaking changes that happen in common modules relatively frequently. It’s sometimes hard to tell which of the N competing libraries that do nearly every task will take off and which will wither.

But my main hang-ups have to do directly with developer productivity issues of the platform itself. Despite Node being on the whole much more productive than previous generation environments, out of the box Node is way less productive than it can be. Why? To summarize, it’s the challenges in managing control flow.

Many projects working to overcome these Node issues

I think the vast majority of people who write apps in Node feel this pain. The many projects out there that attempt to address some or all of these issues (via control flow functions, promises, or other approaches) are strong evidence of this. Joyent, the official keepers of the Node flame, recently came out with a set of Node best practices that recommend the use of a control flow library to help tame these concerns.

Great. But which control flow approach to use?

After running into these issues when we first started building Rival IQ in Node, I adopted async. This is a powerful library, and it was a big step forward on addressing sequencing and looping, and helped somewhat on error handling by at least centralizing handling of error results from callbacks.

But after writing quite a bit of code in that model, I just wasn’t happy. The code base was full of boilerplate code, it was hard to maintain and refactor, it had subtle latent bugs that I kept finding, and at the end of the day, it was just not as productive or fun as I wanted. I honestly felt embarrassed to bring more engineers onto the project in that state (which, to be clear, was my fault, not the fault of any library I was using). I longed for the ability to write code in a more natural way, one where I didn’t feel like I was coding standing on my head. I’m not good at standing on my head.

Simply put, Streamline is a tool that lets you write Node code using all the control flow primitives of the JavaScript language (sequences of instructions, branches, loops, try/catch/finally, etc.) in a natural way, including for async function calls.

Streamline takes care of yielding for the async work to complete and then resuming the logical flow of control automatically on your behalf. That means that you can write your control flow as if these async functions were synchronous. Of course, under the covers, the Node event loop continues to run; no blocking or busy-waiting occurs.

How does Streamline know to do this? In Streamline, you replace the callback functions you would normally pass into async function invocations with an underscore (“_”). This underscore is a special token recognized by the Streamline parser, which tells Streamline to yield here and wait for results. If the call succeeds, the asynchronous results are presented as the return value of the function. Any error response or exceptions are presented as a thrown exception. In other words, async functions act very much like normal functions. Yeah! 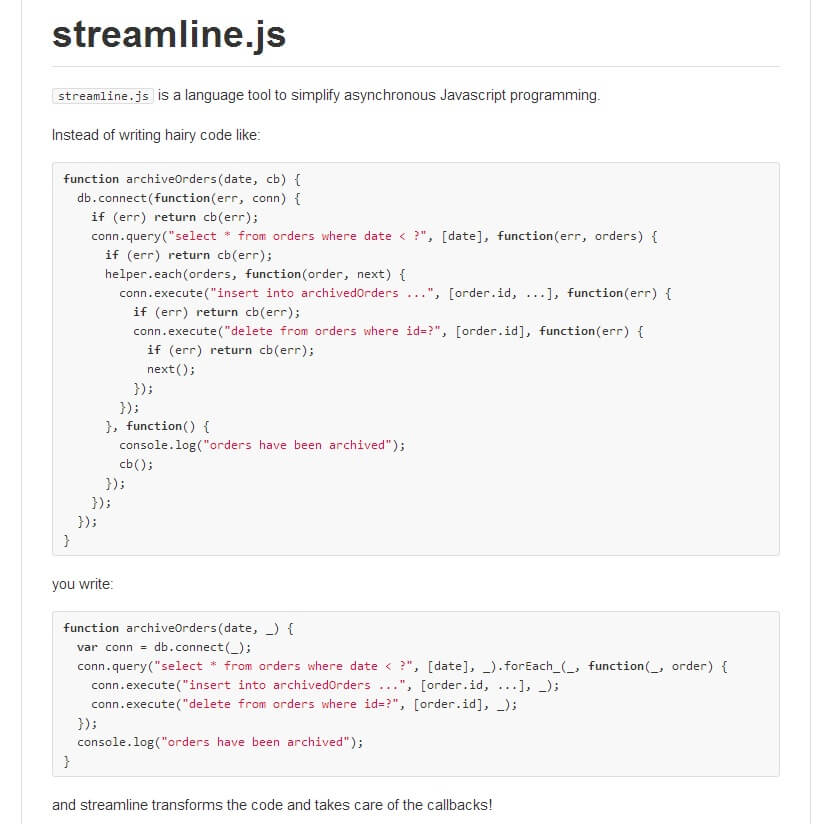 Under the covers, Streamline is really its own language, albeit a language that happens to be extremely close to JavaScript. An on-demand compiler automatically converts Streamline source into native JavaScript, with no explicit compile step by the developer. There are several runtime backend options, including translating to auto-generated vanilla callbacks, running on top of a fibers package, or targeting ES6 generators.

Is Streamline the right approach?

There have been vociferous debates in the Node community about whether the Streamline approach and various other competing models are Good things or Bad things. While I appreciate the passion on all sides, it sometimes has devolved from discussion into brawling, which is a shame. We are still early enough in the evolution of the Node platform that there is room for creative approaches and healthy discussion; and no one is making anyone else adopt a particular technology or approach.

Here’s why we use Streamline

Since everyone gets an opinion, here’s mine: if you are building production apps in Node, you’d be foolish not to evaluate Streamline, because of the developer productivity benefits we’ve seen building typical app business logic, i.e. where you need to orchestrate a bunch of I/O tasks like calling APIs, accessing data stores, and the like.

As always, every technology has its tradeoffs. Two things to be aware of from my experience:

With that background, let me now show you a few examples of Streamline at work, comparing plain Node using callbacks versus Streamline.

The first example is a simple function that logs in a user. It compares the provided email and password with the associated stored hash, and on success updates and returns the user record. This is taken right out of our code, just simplified to remove some bits specific to our environment (by the way, the “db” package is a thin internal database wrapper).

The vanilla callbacks version in this case is really not too onerous. That said, the Streamline function accomplishes the same task much more succinctly. The biggest win is centralizing error handling. Score one for Streamline. This advantage gets more pronounced as you have more steps or branches in the flow.

The callbacks version also has at least one latent bug. What if any of those called functions throw an exception? We’d like to catch those and map the exception to an error callback response. But to do so, you have to jump through some serious hoops, as mentioned above. Streamline, on the other hand, transparently unifies returned error objects with thrown exceptions.

Next, let’s look at a second example. This one is a bit more complex. Here we grab a set of records, and process through them at some level of parallelism, logging and continuing on any errors. Again, this is abstracted right out of our codebase. I didn’t bother showing this in vanilla callbacks only, as it’s pretty hairy.

Example 2a: analyze function, using callbacks and the async library

Here you can see the first version has a lot of pattern noise, while the Streamline version (with the possible exception of the slightly cryptic parameters to the .forEach_ call) is very tight and clear.

Streamline for the win

Streamline is a brilliant piece of engineering that addresses several key weaknesses in Node. We’ve found that moving to Streamline reduced our Node codebase size by roughly a third.

However, its not just concise; we’ve found that it make our code base easier to understand, and has fewer latent bugs. Together, this has significantly increased our productivity in both writing new code and maintaining existing code. Measuring programming productivity is a notoriously squirrely problem. But as a non-scientific estimate, I would say Streamline has given us a 1.5x overall productivity benefit over raw Node. This is HUGE – think about being able to get that much more done.

If you are building applications, I encourage you to give Node plus Streamline a try. We’ve found it to be productive and fun environment. And please let me know how it goes!

Tech dude, photographer, climber, husband, dad; co-founder of Rival IQ. Connect with me on LinkedIn and Twitter. Interested in working here? contact me via the link in the header above!