How to Grab User Attention in Our Multiscreen World 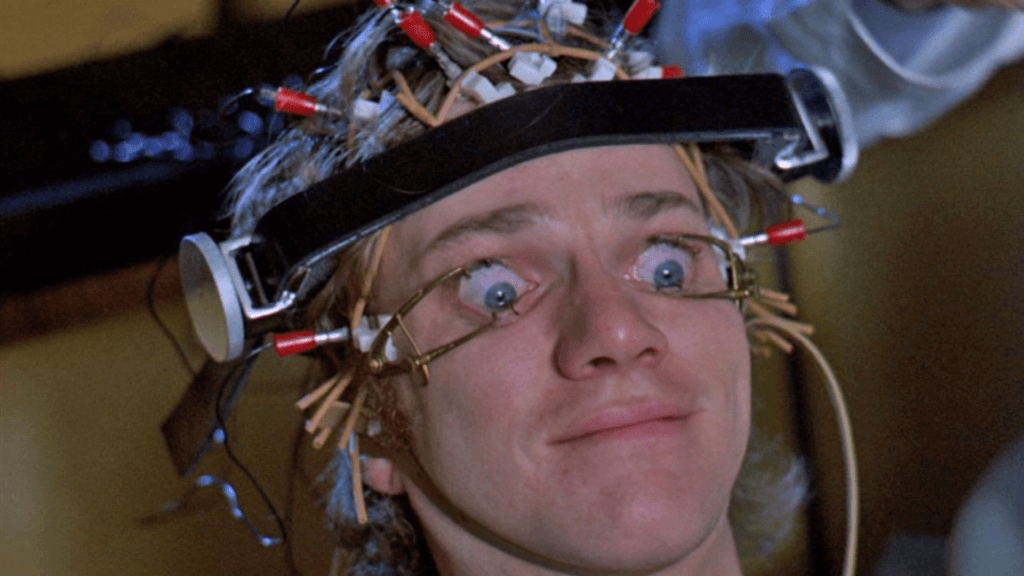 “You will pay attention to my advertisement, Mr. DeLarge!”

How can advertisers get your attention in this multiscreen world?

If only we lived in A Clockwork Orange world (as disturbing as that might be), we’d at least never have to worry about whether people were paying attention to our ads. We know from a recent post here at the Rival IQ Blog that understanding attention is vital for creating effective social media campaigns.  But attention is an elusive beast to measure. For over 50 years, advertisers have been using reach and frequency as proxy’s for attention.

These may have been reasonable metrics in the 1960s – a time when an ad buy across the three major networks ended up reaching over 70% of a brand’s target audience.[i] In a medium for which remote controls weren’t even developed until 1978, marketers could be relatively sure they had a captive audience.[ii] But with the rise of digital marketing and the proliferation of mobile devices, reach and frequency provide less and less certainty that your message is being paid attention to, let alone even seen. 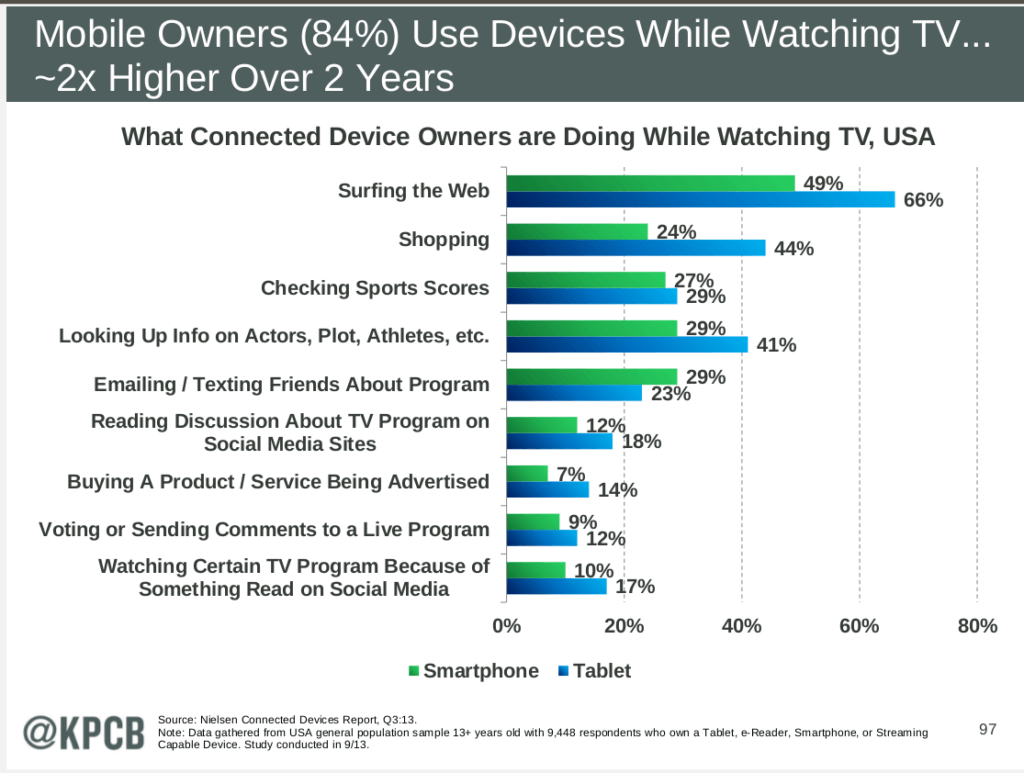 This Nielsen 2103 study shows what mobile devices users do while watching TV.

In order to measure the impact of multiple device usage on video advertising effectiveness in this multiscreen world of ours, AOL partnered with Nielsen to develop a new metric – the Attention Index. The study included nearly 3000 individuals and gathered data from them via in-person testing, surveys and in-home ethnographies. The graphic below lays out their findings for the impact of viewing on multiple devices for brand recall. 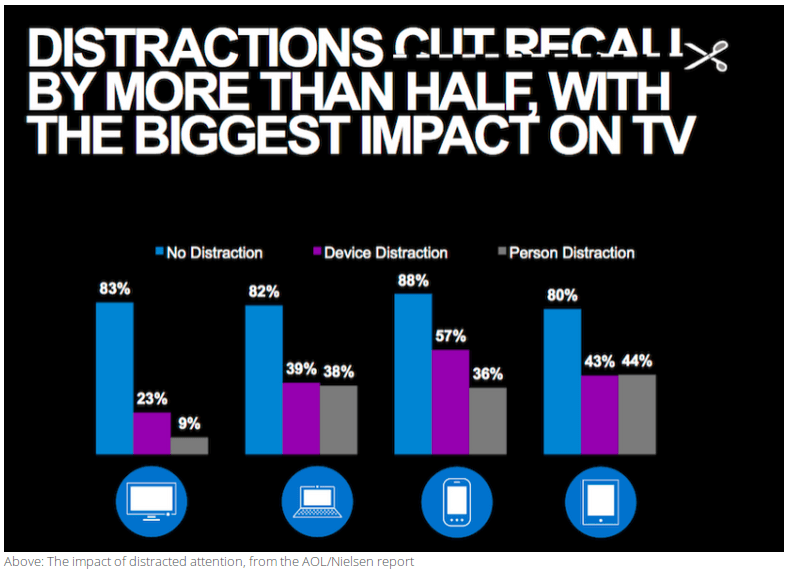 Their measure took into account not only distraction from devices, but distractions from other people as well. As the graph shows, when you add any device to a TV viewing session, ad recall drops precipitously from 83% to 23%. There are similar, though less drastic, drops when adding a second device to viewing from a laptop, phone, or tablet. In other words, while we love multiple devices, we lose attention span in our multiscreen world.

The upshot of knowing that this drop in recall occurs is that marketers can take it into account when planning their campaigns and ad spend. And that’s where the Attention Metric comes in. AOL proposes that this number can inform advertisers how much more often an ad needs to be viewed to compensate for the distraction factor.

Attention Index for DVR and ad skipping, from AOL

Attention Index for Millennials, from AOL

In their summary of the research, Venture Beat explains, according to the metric: “TV advertisers need 17 percent more impressions than the impressions of ads in short-form videos on hand-held devices, to get the same effect.” It’s not a bad thing to know, and becomes more useful when broken down by age, gender and certain behaviors (like ad skipping), all of which AOL/Nielsen include in the study.

Advertisers should focus more on mobile 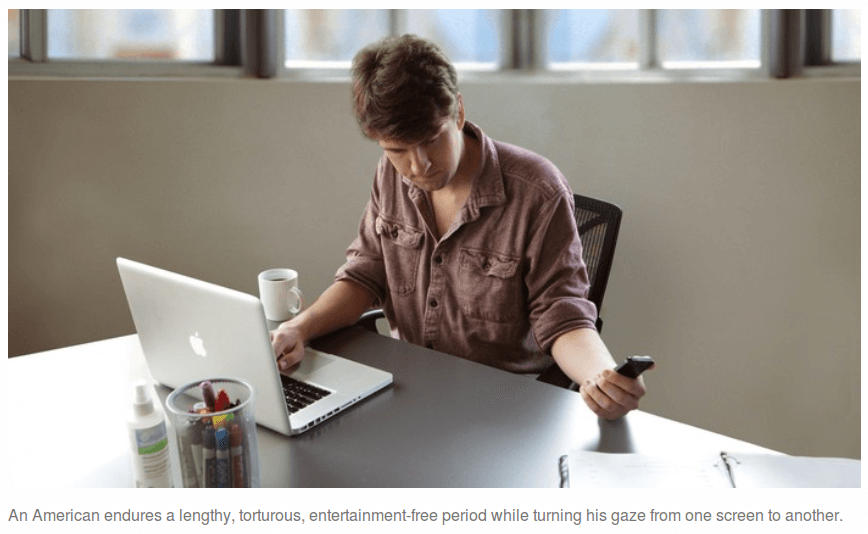 What is clear from the AOL/Nielsen research is that in our brave, new multiscreen world, some devices fare better than others in terms of brand recall from video. Mobile phones and tablets, perhaps due to their smaller screens and the need to view them more closely, do better than television and laptops. Other research bears this out as well, supporting the idea that for video advertising, mobile may be the best bet for marketers.

For example, not only do mobile viewers maintain better recall for video ads, recent research from Vdopia suggests that they express a greater willingness to sit through short video ads, especially when those ads are the gateway to free content of interest to the viewer. 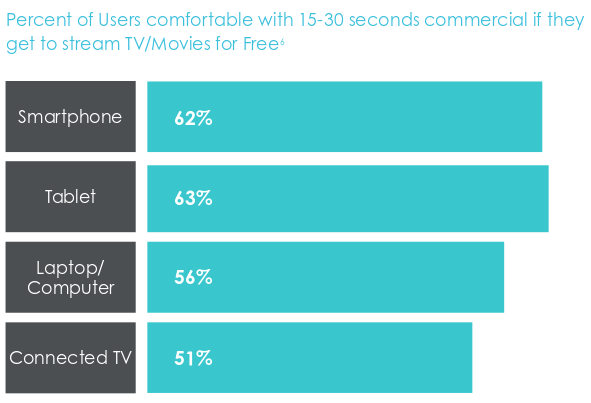 So the question then is, if video ads are an important part of your marketing mix, what is your mobile strategy? Heck, that’s a good question even if video ads aren’t a priority for you. Maybe we’ll cover that in a future post…

The trend of using multiple devices or screens at once is not likely to decelerate any time soon. In fact, with the introduction of smart watches, Google Glass and who knows what else, it will only be increasing.

Share your ideas of how marketers can get their target users attention amid this multi-device reality.  And in the meantime, happy viewing!! 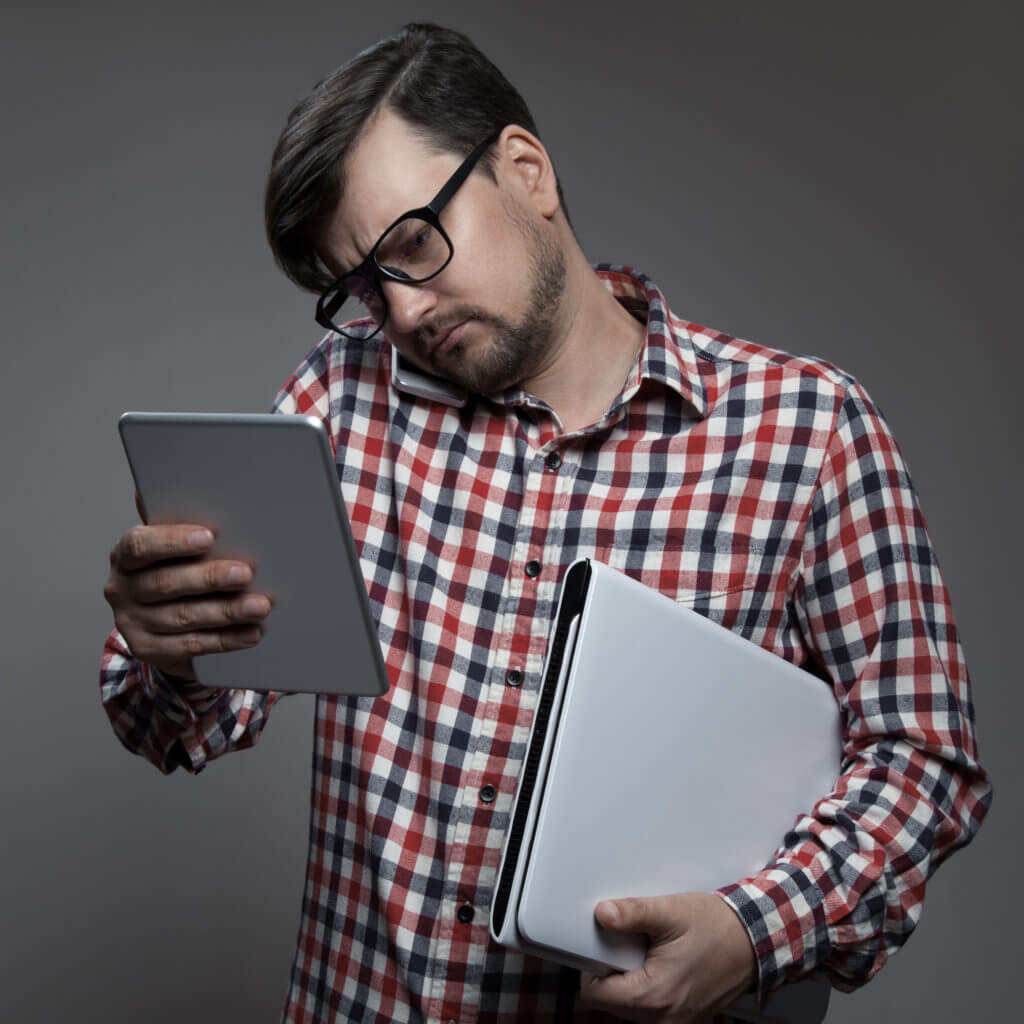