Who is Winning the World Series Social Media Face-off? 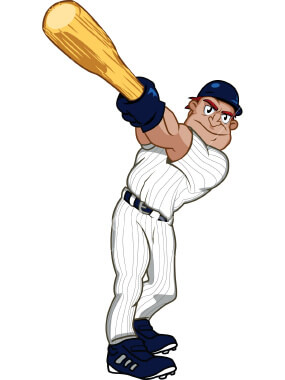 In a baseball game, the total score clearly designates the winner. But in social media, it’s not always pure quantity that shows who is winning the hearts and minds of social fans. As they say, it’s not the size of the bat but how you swing it! The same rings true in our World Series social media scorecard, where the team with the most followers doesn’t always equal the team with the most fan engagement.

In baseball, it’s pitches, hits and fielding.  In social media, audience, activity and engagement. Let’s see how our two teams do across these vital social media measurements.

First, the Giants simply have more social media fans.  This might just be a clear case of geography and population. The San Francisco Bay Area has a population of over 7 million people covering nine counties and 101 cities. The Kansas City metropolitan area sports a population of 2.34 million, but since the Royals are the only professional baseball team in Missouri (or Kansas for that matter), its fans could number about 6 million. So, the SF Giants have a slightly larger fan base to work from.  However, the gap in social media audience is four times greater, with the Giants bringing in more than 5 million social fans compared to the Royals 1.3 million. 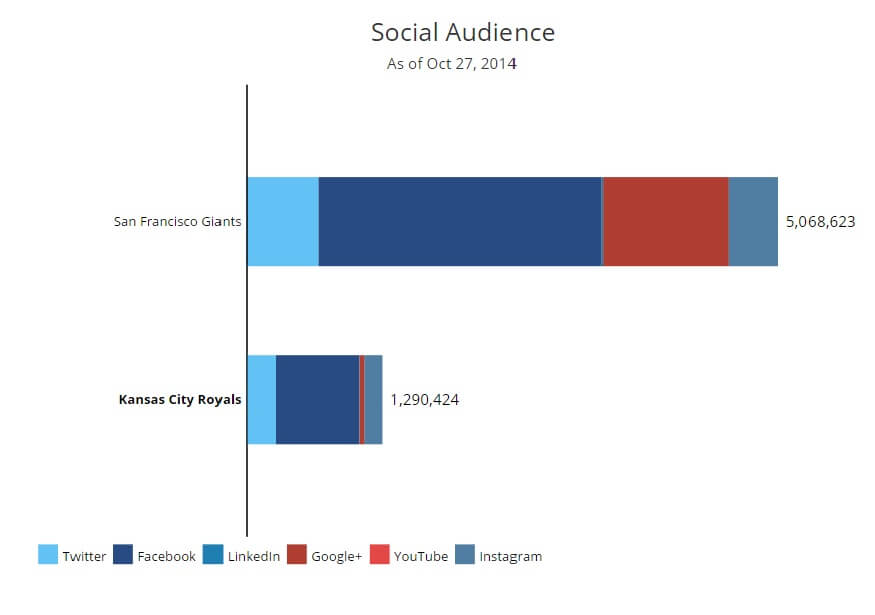 What’s also interesting is how the Giants fans are spread out across four social media networks – Twitter, Facebook, Google+ and Instagram.  This could be again a geographic reason, since the Giants call tech-crazed Silicon Valley home.  There’s a dabble of G+ and Instagram with Kansas fans, but they are mostly Facebook and Twitter. 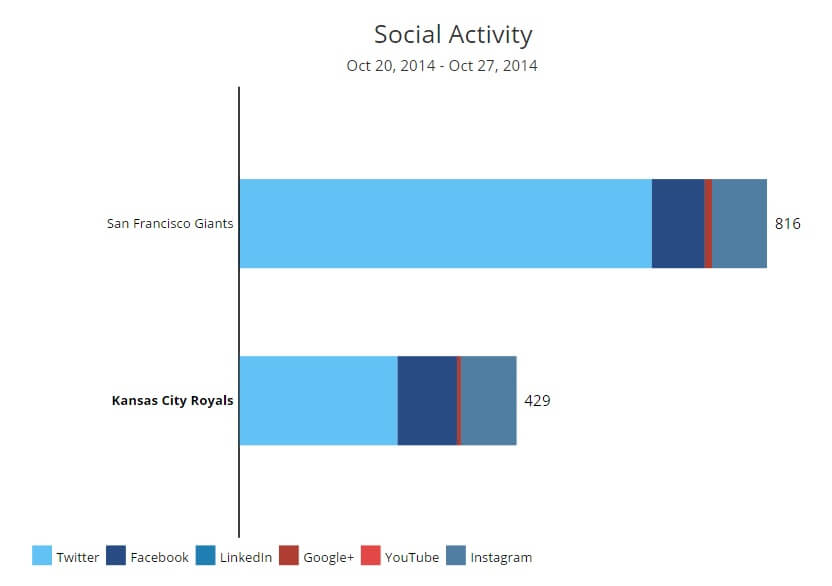 Twitter was the main battlefield here, with the Giants tweeting an average of 80 times per day over the past week, compared to the Royals average of 30.

The San Francisco Giants and the Kansas City Royals have been providing high entertainment for their fans on and off the field.  At Rival IQ, we look at engagement two different ways – Total Engagement, which is the total number of social interactions (shares, comments, retweets, etc.) of an organization’s own tweets during a specific time period. And Engagement Rate, which levels the playing field when you have big disparities in audience base like we have here with the Giants and Royals, as engagement rate is the number of interactions per thousand followers.

When it comes to Total Engagement, not surprisingly, the Giants pull in the largest number, outscoring the Royals by a mile (or three times!).  Also, look at the engagement on Instagram! Wow, those Giants fans love their images. 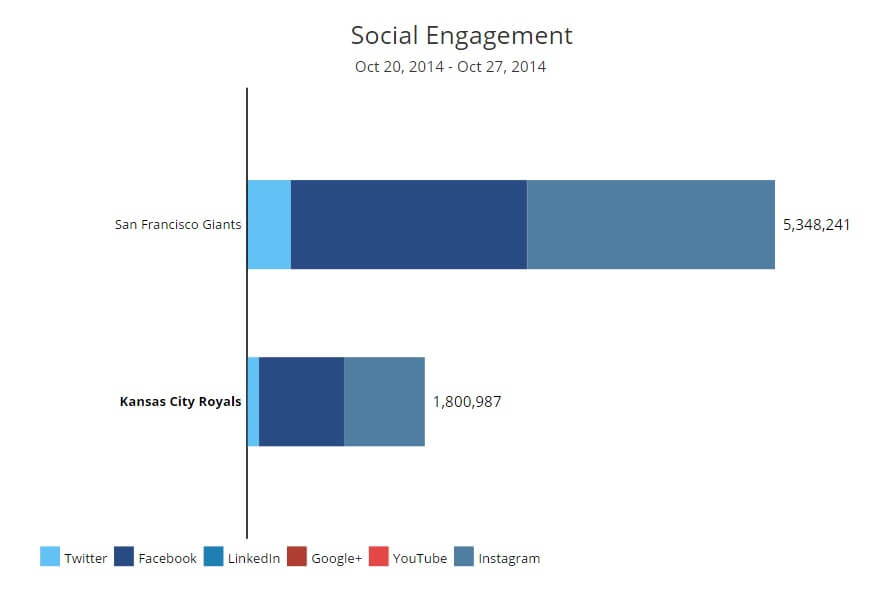 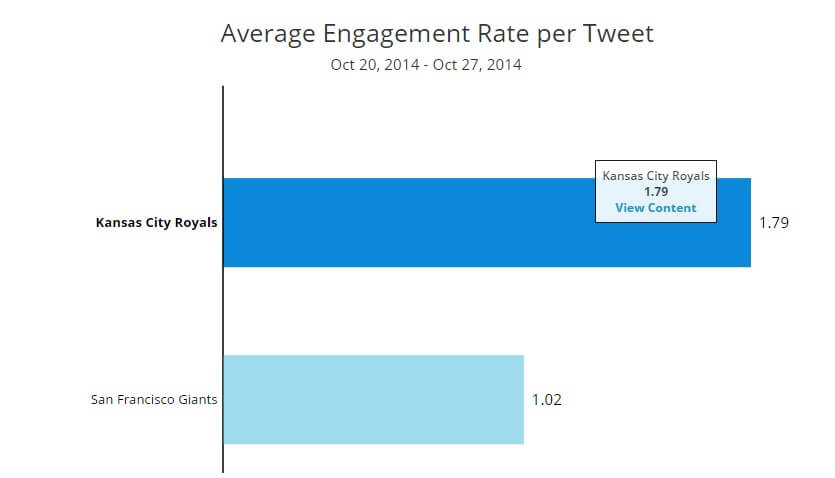 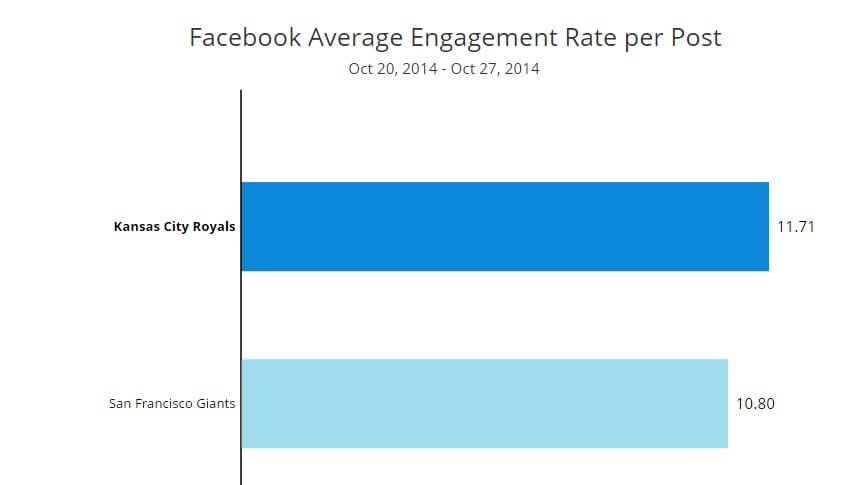 Both teams have done a great job creating a unique hashtag for their fans.  For the Royals, it’s #TaketheCrown — showing a personality of support and brotherly love. In their social posts, the Royals give virtual high fives to their pitches and teammates, accompanied often by photos of teammates congratulating each other.

For the Giants, it’s all about #OctoberTogether.  That’s fitting, since spending October on the baseball diamond has become a familiar scene for Giants fans.  The top posts for the SF team is all about winning, and is a bit more assertive – reminds me of their style of baseball as well! 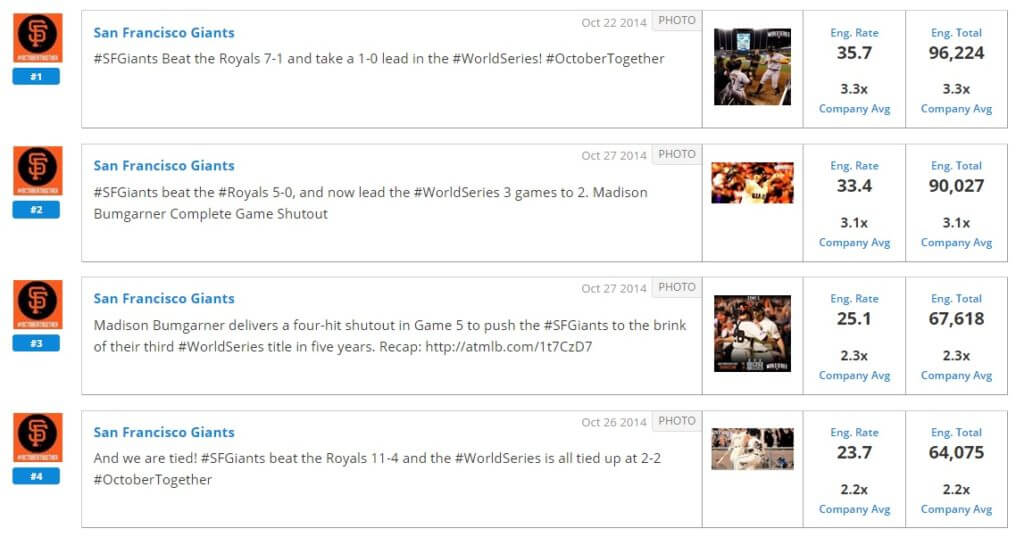 Social media is increasingly seen as a predictor of business success and revenue.  You lose on social media, or ignore it, and chances are your business will suffer.

My prediction from this analysis is:  The Giants take the World Series, but the Royals’ win continued love from their fans.

The Giants will ultimately win based on pure numbers and their ability to get aggressive and pull out the big bats when needed. 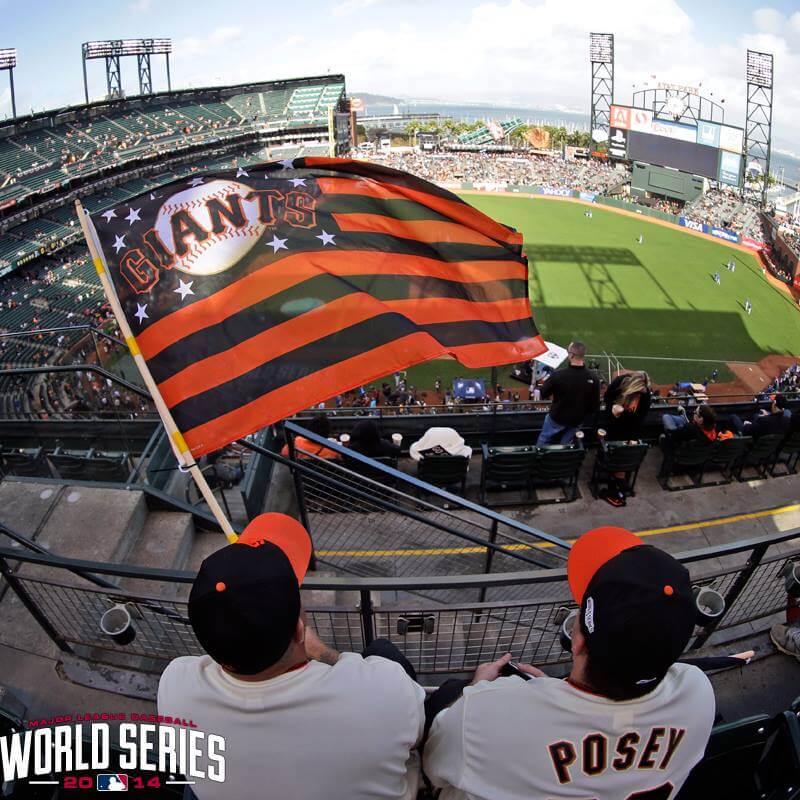 But the Royals can take heart in having one of the most loving and loyal fan bases in the world.  Maybe in the off-season, the Royals social media team can work on building up the fan base! 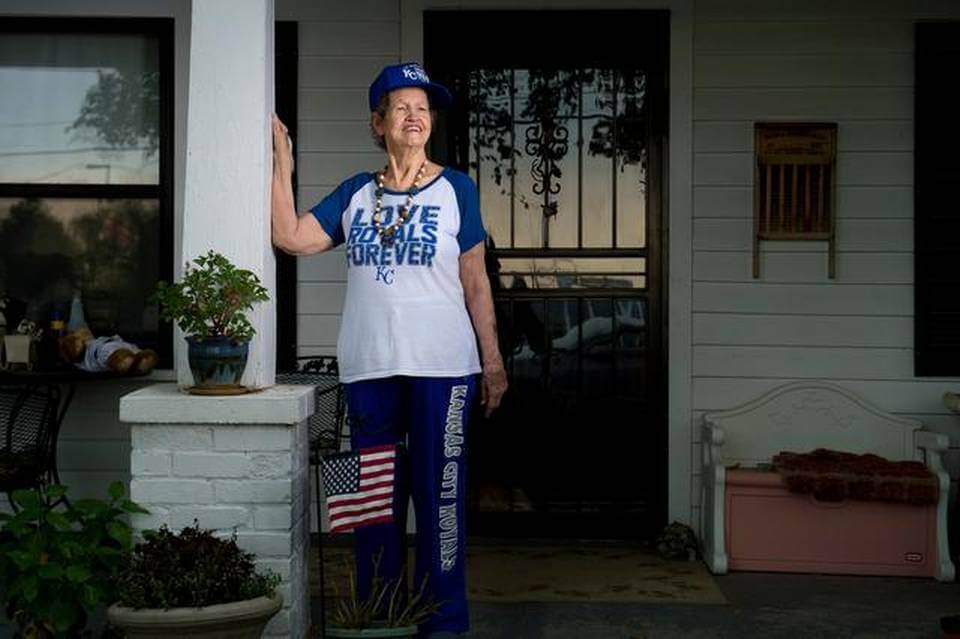 Do the Analysis Yourself!

Want to see all the details of our World Series Social Media face-off?  You can dive into the analytics yourself.  Simply click on this link (or copy and paste in your browser): http://bit.ly/1rof8Cs – and you can create a FREE Rival IQ account that will be prepopulated with our Competitive Landscape of the SF Giants and KC Royals. Have fun!