Game 5 of the Stanley Cup is underway, and the LA Kings have the home ice advantage.  But we wanted to find out if that advantage extended off the ice to the socialsphere.

What we found is the Rangers are skating ahead of the Kings on social engagement and reach, with an overall stronger social presence across multiple channels. And the Rangers rule Facebook.   However, when it comes to twitter and overall growth rates over the past 30 days, the Kings are in the lead.

The Kings are killing it on Twitter.  Not only do they have 43,000 more followers than the Rangers, but they have seen their followers grow by a whopping 15% over the past month compared to the Ranger’s 10%.

LA Kings are leading in overall followers and growth over past 30 days.

This could be because the Kings are out-tweeting the Rangers by 20 tweets per day, averaging over 56 tweets versus the Rangers nearly 37 per day.  What’s more, the Kings are drawing more engagement from their followers, netting more retweets and favorites of their tweets than the Rangers. 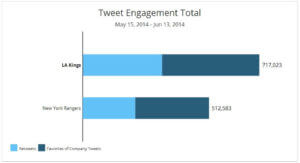 The Kings receive more likes and retweets than the Rangers.

Interestingly, it appears New Yorkers, or at least Rangers fans, prefer Facebook, because here is where the Rangers are far outscoring the Kings.  The Rangers have more than 1.3 Million “Likes” (similar to a follower) compared to the Kings’ 717,000, in spite of the Kings adding nearly 16% more likes in the past 30 days.  The Rangers are publishing more Facebook posts per day, averaging nearly 5 to the Kings’ nearly 4.  More important is the engagement the Rangers are receiving on Facebook, blasting the Kings in overall engagement across likes, comments and shares. 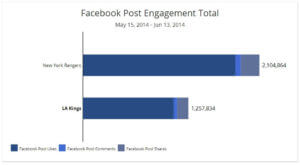 The Rangers get great engagement from fans on Facebook

The teams are skating stick to stick on Instagram, with both teams enjoying over 200,000 followers and both teams publishing nearly 5 posts/photos on Instagram every day.  The two teams are also nearly tied when it comes to average engagement rate per post on Instagram, getting nearly 90 interactions (likes or comments) per thousand followers. 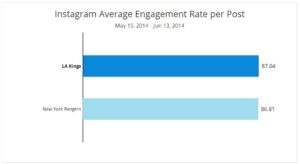 How about other social media channels?  Google+ doesn’t seem to garner much attention from hockey fans, as neither team has much of a presence and posts and engagementn have been minimal the last 30 days.  YouTube is slightly better, with each team posting around 1 video per day, each with a few thousand subscribers to their YouTube channels.  While the Kings have more overall subscribers (7,000 to the Rangers’ 4,000), the Rangers have grown their subscribers by nearly 21% over the past 30 days.

LinkedIn? There is a private New York Ranger fan group, with around 1,100 members.  Strangely enough 71 of those are in my network, which has me wondering who are these connections who love the Rangers?  In this case, the NHL team is slightly edging out the Texas Rangers and the US Army Rangers in terms of group members.  For the LA team, there is a LA Kings Business Group on LinkedIn, which states it is for  people interested in the business operations of the LA Kings National Hockey League franchise.  It sports a bit over 700 members, 25 of which are also in my network (go figure!).

Best of luck to all the fans.  And while you’re watching the game, you can share the love and help your favorite team win on social as well as on ice by tweeting, facebook posting and liking them everywhere.

And not that I’m bitter, but I couldn’t help noticing that my former hometown Detroit Redwings are actually more popular on Twitter and Facebook than either the Rangers or Kings.  Yep, sore loser. It’s like throwing a squid on the social ice of life!

While we’re having fun with this blog, you can gather serious analytics about you and your competitors with Rival IQ! Sign-up and check it out for free with our 14-day trial!