Let’s go over why Instagram hashtags are an important piece of your brand’s Instagram strategy, the pros and cons of using hashtags in the post and in the comment, and which placement is better according to our analyses.

Instagram hashtags are ultimately a search tool. Not only do Instagram users turn to hashtags when they want to find new content or brands within that topic, but hashtags give more context to your content which informs the algorithm.

Instagram itself says that hashtags help them understand what your post is about and better categorize it so people who may be interested can discover it.

This means that using the right hashtags that your target audience is searching for or engaging with can help them discover your content, either on the Explore page or through search.

When your searchability and discoverability relies on hashtags, it’s a fair question to ask: Should Instagram hashtags be in the post or the comments?

Let’s run a quick experiment to find out.

Using Rival IQ’s Discover tool for hashtag research, a search for the popular hashtag #giveaway shows us an analysis of the top 250 posts that have used that hashtag. 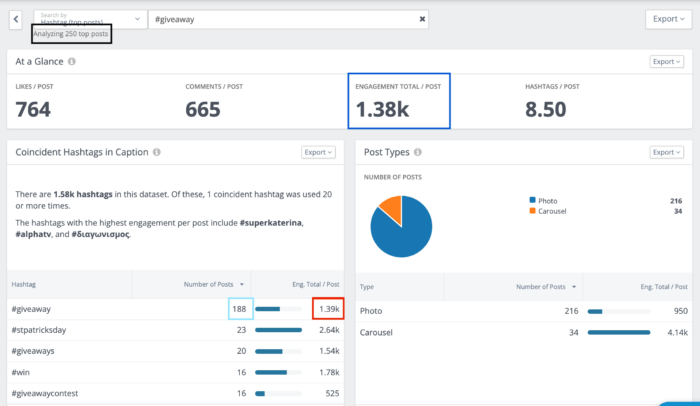 As you can see in the highlighted black box towards the top of the page, our tool pulled the top 250 Instagram posts that used the hashtag #giveaway. Those posts have an engagement total per post of 1.38k, as shown in the dark blue box.

If you take a look at the highlighted light blue box underneath the “Coincident Hashtags in Caption” section of the screenshot, you can see that only 188 of the top posts used #giveaway in the caption. If we do the math, this means the remaining 62 posts must’ve used the hashtag in the first comment instead of in the caption.

But before we jump to conclusions, let’s experiment with another hashtag.

An analysis of the hashtag #handmade, which is used by many small businesses and artists, shows us that out of the top 250 posts (black box), there was an engagement total per post of 340, as shown in the dark blue box.

If you search for the popular hashtag #foodie, you’ll see that the engagement total per post for the top 250 posts is 475, as shown in the dark blue box. 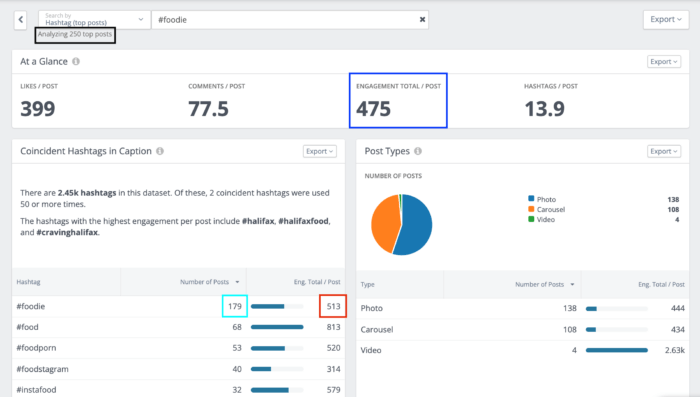 As evidenced by these examples, there may be some variation depending on the hashtag, but overall, there isn’t a major difference between the two placements in terms of engagement. It all comes down to experimentation and analysis.

But if you’re still on the fence about which hashtag placement is best for your Instagram strategy, here are a few pros and cons of each.

If you keep them minimal, hashtags can weave into your caption seamlessly and help amplify what the post is about. In fact, Instagram’s own Creators account even recommends only using 3-5 hashtags per post in order to keep your content focused and relevant. 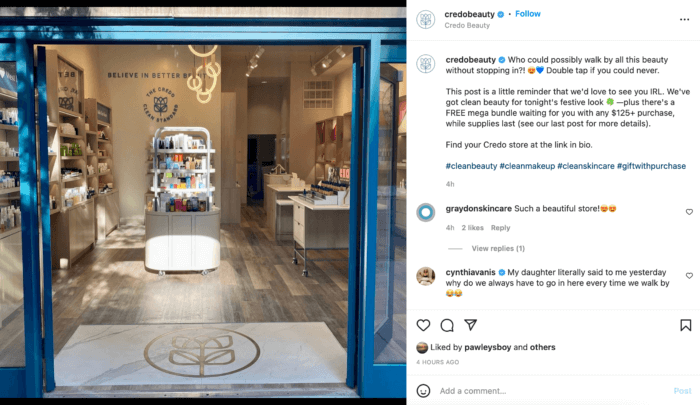 Credo Beauty only used four hashtags in this post, but the selection was intentional. If you’re unfamiliar with the brand, you can assume that they offer beauty products, judging by the name. But by using hashtags like #cleanskincare and #cleanbeauty, Credo Beauty is making it clear that you can expect only clean products from their business which is an important brand differentiator.

Using a handful of relevant hashtags in your caption can help your brand clearly communicate what it’s all about as soon as someone discovers the posts.

Pro: Hashtags can be a brand building tool

Another compelling reason to include hashtags in the caption is when they serve a purpose for your overall brand. For instance, if you have a branded hashtag that represents a pillar for your brand or was created as an element of a campaign, then displaying it clearly in the post could be helpful. By making the hashtag a part of the post, users can easily access it and be able to find other things you’ve posted.

Outdoor recreation brand REI makes the case for keeping hashtags in the post rather than in the comments when it comes to branding. REI uses its branded hashtag #OptOutside as a way to find and repost user-generated content, but also to provide users with a brand campaign to participate in. 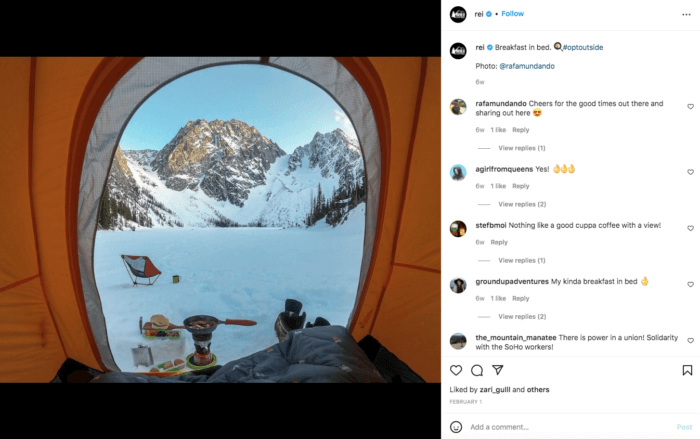 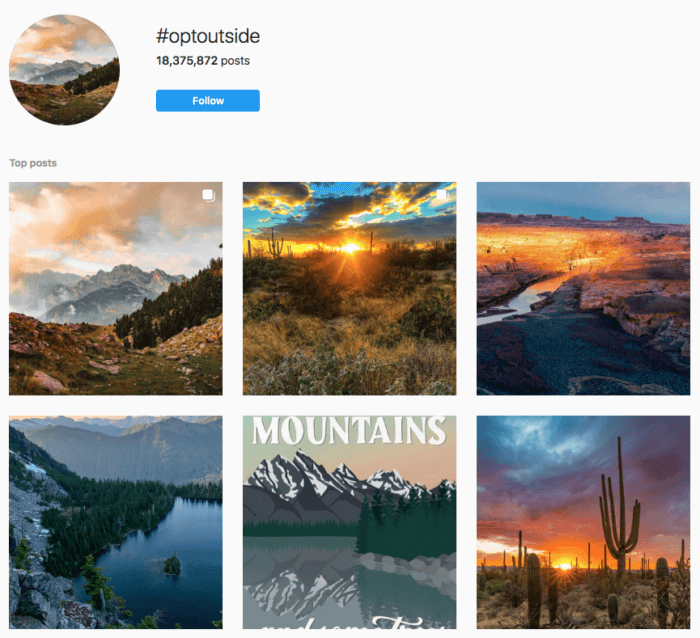 When it comes to execution, one benefit of using hashtags in the post is that it makes it easier to schedule content because everything you need for the post can be published at once.

When you opt to put hashtags in the comments, you have to manually comment after the post has been published. While there are some social media scheduling tools that allow you to schedule a first comment, it’s an extra step worth considering.

Con: Cluttered captions can be distracting

Instagram allows you to include up to 30 hashtags per post, though under 10 is our recommended hashtag best practice. If you do plan on using the maximum amount, then your caption could look cluttered, too busy, and could even distract from the message of the caption.

This is entirely subjective and dependent on your brand’s overall aesthetic and approach to Instagram. However, it’s worth considering how too many hashtags in the caption can affect the user experience.

Pros and cons to putting Instagram hashtags in the comments

Pro: Your caption is visually cleaner

One of the most obvious benefits of putting Instagram hashtags in the comments rather than in the post is that it keeps your caption visually cleaner. If you’re using the max amount of hashtags and keeping them in the post, the caption is bound to look busy.

Influencer Kailo Chic is an example of a brand that effectively uses hashtags in the comments as a way to keep the caption less cluttered looking. With the number of hashtags she used under this Instagram post, it makes sense to keep them below the caption so they don’t distract from the content. 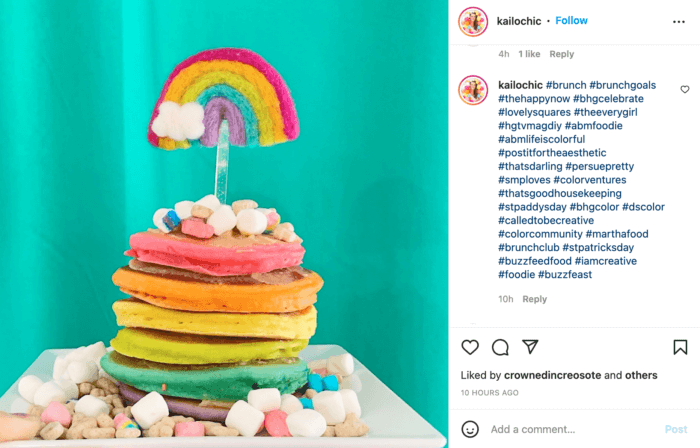 This is another subjective choice and totally depends on the aesthetic you’re aiming for and the message you want to get across to your audience.

Pro: Your followers can focus more on the caption

In the same vein as keeping your post visually cleaner, putting hashtags in a separate comment also helps Instagram followers focus on the message or CTA in the caption.

This is especially important if your caption is on the longer side. Take this post from Lumberchino, a small woodworking business, for example. 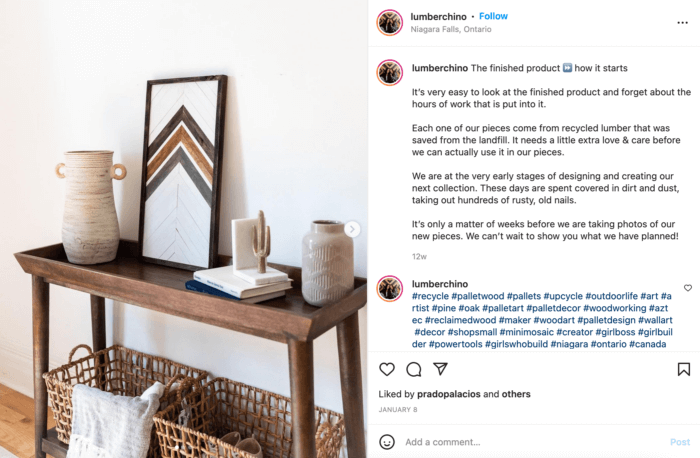 By separating the hashtags from the caption, followers are able to focus on the story behind the post instead of being distracted by hashtags. This could be an ideal hashtag strategy if your captions include more in-depth content like behind-the-scenes stories, how-tos, or important updates.

When it comes to discoverability, putting your hashtags in a comment is just as effective as putting them in the caption. The key is to make sure the timing is right. Instagram uses hashtags to identify and categorize content, so if you don’t post the comment with the hashtags as soon as the post is published, then it could affect when and where your content shows up. 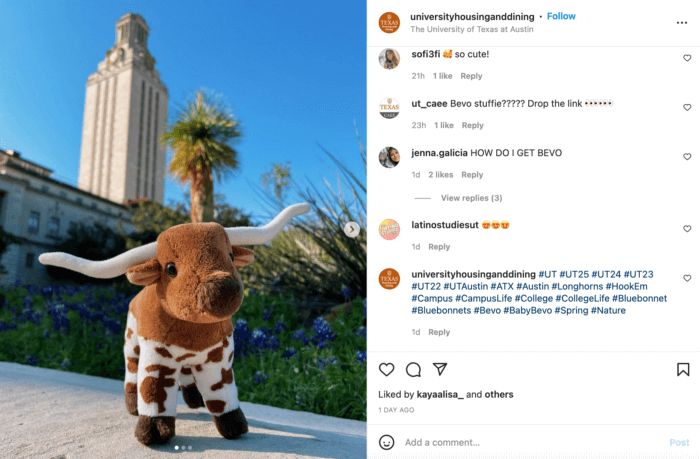 The housing and dining account for The University of Texas is another example of how to effectively include hashtags in a comment versus in the caption.

Even though the comment with the hashtags was posted after the post was published, you can see that it was posted in the same day in order to capture timely engagement from people who may be searching for those hashtags.

Con: Timing has to be just right

If you publish your Instagram posts manually, then you have to be sure to add the comment with the hashtags as soon as you hit publish in order to capture the most impact and engagement. If you post the comment too late, it’s almost as if your post didn’t have any hashtags at all so it might not have the same visibility or reach.

Fortunately, there are some social media management tools out there that allow you to schedule the first comment at the same time that you schedule the post, but this is something to consider either way.

While there are pros and cons to putting Instagram hashtags in the post or in a comment, there isn’t much of a difference between the two placements in terms of discoverability. It all comes down to how you want to communicate your message.

But if you want to dig a little deeper into the engagement rates for specific hashtags your brand uses, here’s how to research your Instagram hashtags using Rival IQ.

Using the Instagram Discover tab, you can search for a hashtag you want to use and see what the overall engagement looks like.

For example, a search for the hashtag #plantbased shows us an analysis of the 250 most recent posts that use that hashtag, as you can see towards the top of the screenshot below. 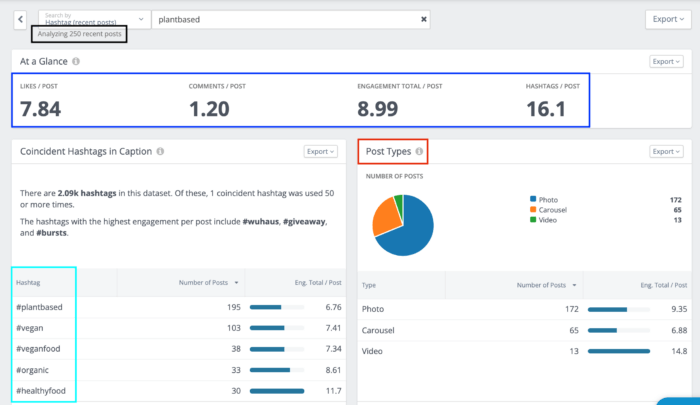 The analysis also breaks down the overall metrics for that hashtag including the average likes, comments, and hashtags per post, as shown in the dark blue box in the “At a Glance” section.

You can also see related hashtags (as shown in the highlighted light blue box on the left side of the screenshot) as well as which post types (red box) are being used with the hashtag.

Plus, there’s a visual overview of the most engaging posts that used the hashtag, as shown below. 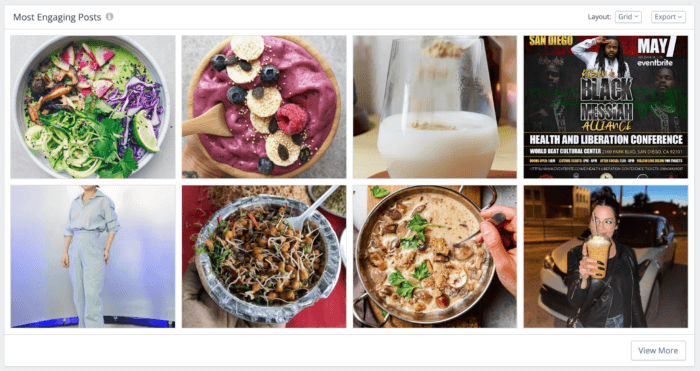 Let’s take another look at the hashtag #plantbased example to see exactly how our Instagram Discover tool can help you compare hashtags in the caption and in the comment. 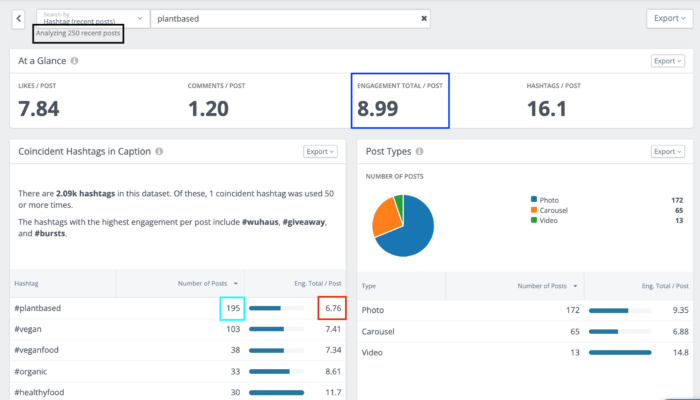 If you take a look at the black box towards the top of the screenshot, you can see that our tool analyzed 250 recent posts that used the hashtag #plantbased. The engagement total per post for those posts is 8.99, as shown in the dark blue box.

But when you head over to the light blue box underneath the “Coincident Hashtags in Caption section, you can see that only 195 posts used the hashtag #plantbased in the caption and received an engagement total per post of 6.76, according to the red box.

You can conduct this search for any hashtag that you want to include in your content to see how much engagement it’s getting and give you a better idea of the placement you want to use.

To sum it up, Instagram hashtags can be used in either the post or in a comment. The algorithm will take those hashtags into account for its categorization purposes regardless of their placement. At the end of the day, the choice is up to you as a marketer.

To ensure the best possible reach and engagement for your posts, it’s worth exploring each option through a combination of data-informed decisions, Instagram best practices, and user experience considerations.

After experimenting with the different placements, either in the post or in a comment, lean into the one that yields the best results for your Instagram strategy.