With trust in the press at an all-time low, social media has become an important tool in the modern politician’s communications playbook. Platforms like Twitter give politicians the ability to speak directly with their constituents without the context and analysis applied by the media. President Trump’s surprise Presidential win is often attributed to his large Twitter following and ability to cut through the press and speak straight to his base.

With the 2018 midterms on the horizon, congressional politicians should be seeking to develop smart social media strategies that will help them engage on a one-to-one basis with their constituents. The groundwork for that should be taking place right now, with politicians building their audience, diversifying channels, crafting concise messaging and using analytics to understand how they can cut through the social media noise.

At Rival IQ, we built our software to help digital marketers not only analyze, interpret and improve their organization’s social media presence, but also enable them to compare their own metrics to all the competitors in their landscape. So we thought we’d take this technology and use it to see how Senate Democrats and Republicans are harnessing the power of social media.

We’ve developed an in-depth report that sees Democrats and Republicans go head-to-head based on their cross-channel metrics as well as specific platforms audience and engagement. You can find the methodology for this report at the bottom of this blog.

This blog covers some of the highlights of our report, but you can download it in its entirety here. 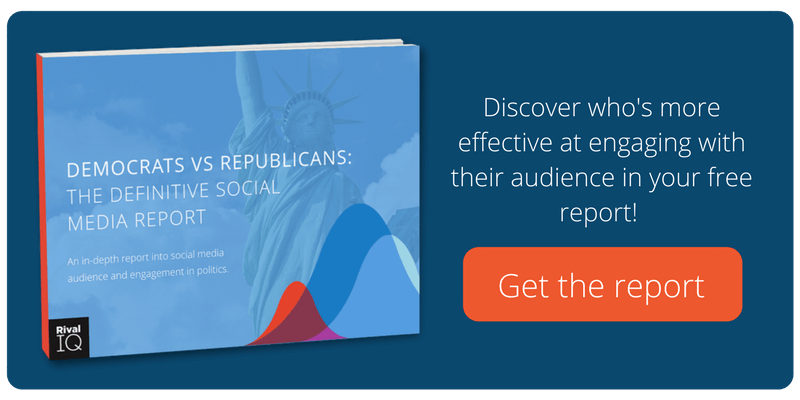 Your sneak peak at what’s inside

Top ten senators by total followers as of March 1, 2017 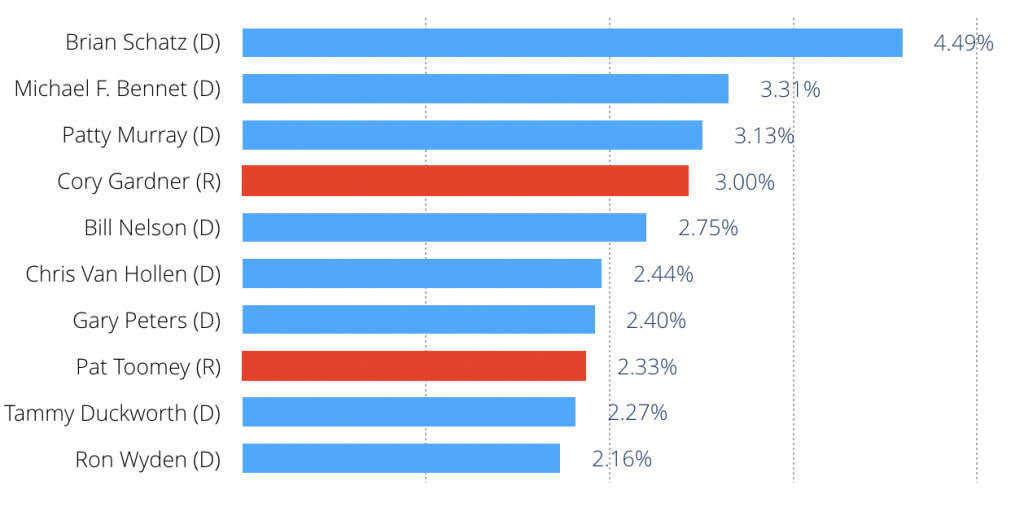 Top ten senators by total Twitter following as of March 1, 2017

Data doesn’t lie: on nearly every measure, Democrats are outperforming Republicans (except in the Electoral College). This is especially true when it comes to engagement metrics. We’ve developed some main findings for both sides of the aisle:

1. Audience does not equal engagement

On every platform, almost none of the top ten senators by audience make it into the top ten measured by engagement. This data goes to show that there’s a significant opportunity for politicians to focus on engaging their constituents rather than just acquiring followers.

One of the most glaring differences we found in the data was the gap between Democrat and Republican Instagram video engagement (5.66% vs. 1.05%). This gap carries over to Twitter (1.05% vs. 0.28%) and Facebook (2.75% vs. 0.55%). Democrats are doing something right when it comes to native video – Republicans should take heed and invest in creating valuable video content.

3. Hashtags really do make a difference

Our data shows that by using the right hashtags, engagement rates can soar from a baseline average of 0.78% to 6.46% (#LetLizSpeak). Senators should be using data to determine which hashtags are truly engaging with their audience and quickly responding to the with relevant content.

We use Rival IQ to analyze 31,200 social media posts of all Democratic and Republican senators for a three month period between December 2016 – February 2017.

Engagement is defined as measurable interaction on social media posts, including likes, comments, favorites, retweets, shares, and reactions. Engagement rate is calculated based on all these interactions divided by total follower count.

We chose to analyze senators rather than House members and other prominent leaders (e.g. Barack Obama, Donald Trump, Cabinet members) to get a fair assessment of politicians elected to the same level of office.

Bernie Sanders, formally elected as an Independent, has been included as a Democrat because he caucuses with the Democrats, ran for the Democratic nomination and serves as part of the Democratic party leadership.

New to Seattle, Torie is a transplant from Sydney, where she was Head of Marketing at Squiz, a global marketing technology provider. She has a solid background in digital, content, and analytics, having built experience with a number of Australian tech business and agenices including Bang, Radar, and oOh! Beyond being a fantastic marketer, Torie is a dog lover and a huge history nerd (vikings, anyone?). This can, of course, lead to interesting meal-time conversation - particularly, when you're helping Torie complete her introduction to "real" American foods like chicken-fried steak and deep-fried anything.