[Author Note: This post was originally written to be published simultaneous with and in support of the April update for the GeekWire 200.  The folks at GeekWire liked it enough that they wound up publishing virtually the entire post on their site.  My intention isn’t to duplicate the post but I wanted to post it on the Rival IQ blog as well since the concepts I cover are valid for any marketer to consider and I want to make sure our full audience at the Rival IQ blog got a chance to see the post as well.  Enjoy — John Clark]

In our last few posts we’ve explored a couple of key SEO techniques by comparing key players in specific markets and drawing competitive insights from what we saw.

And that got me wondering…are tech companies more savvy when it comes to digital marketing?

Lucky for me, through our partnership with Geekwire, Rival IQ monitors and benchmarks the digital activities of approximately 297 Seattle-area tech companies that move in and out of the GeekWire 200 ranked index every month. So it didn’t take long to find answers…

I decided to compare these high-growth tech companies to the thousands of companies Rival IQ tracks regularly.  Specifically, I looked at the quality of their meta descriptions and whether or not they were exposing their keywords to the world.

Top-Notch Meta Description? No better than the average bear.

Even though homepage meta descriptions play an important role in getting people to your website, Rival IQ determined that 56% of the companies in our database had left their meta descriptions blank or had descriptions that were too long to be effective. (Read more at – Is Your Meta Description Working As Hard As Your Tagline?)

How did the tech companies compare? 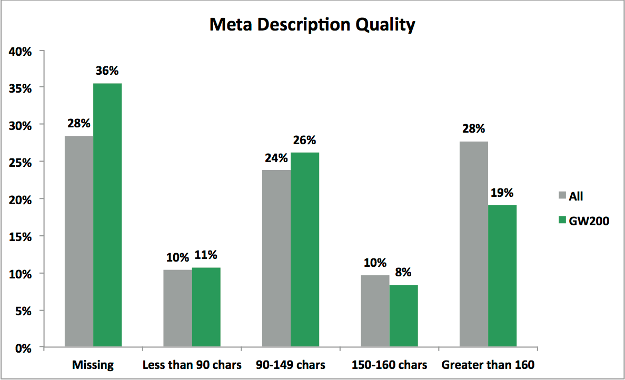 Turns out 36% of the GeekWire 200 had missing meta descriptions and another 19% had written descriptions that were too long and therefore getting cut-off mid sentence in the search results. So 55% of the tech companies rated a fail.

Keyword Savvy? Not so much.

Even though the search engines no longer leverage meta keywords in their algorithms, quite a few companies, over 50% in our database, are still populating these fields on their website and 27% of those are optimizing their content. As a result, they’re exposing their keyword strategy to the world. (Read more at – Are you accidentally exposing your keyword strategy?!)

Are tech companies on the ball? 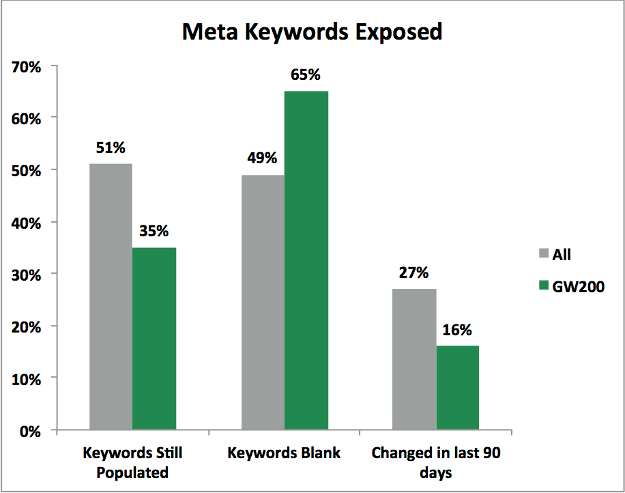 Slightly fewer GeekWire 200 companies are not exposing their meta keywords

I’ll give this a qualified yes. Only 35% of the GeekWire 200 is sharing their keywords with the world and fewer are actively optimizing them. Better, but that’s still a lot of opportunity for market-watchers to gain valuable insight on how to compete against these market-leading tech companies.

Score: Point to the Tech Companies.

Many of the GeekWire 200 leverage social media in their marketing mix. Analyzing their activity on Twitter, Facebook and LinkedIn gave me a great opportunity to explore the strategic insights available to marketers, including:

Let’s take a look. It’s time to get off the porch and run with the big dogs!

I always recommend having a baseline understanding of how your following on social media compares to others in your market. Here’s an example:

In terms of a raw following on Twitter, the humor site Cheezburger is the big dog in the GeekWire 200.  Lockerz, the social commerce and sharing site, comes in second with less than half as many followers.

We also have two video game developers in this analysis⎯Bungie and Runic Games⎯with Bungie being the big dog with over 130,000 more followers.

Insight: As a marketer at Runic Games, I’d be looking more closely at Twitter. Assuming the companies have similar target audiences, Twitter could be a powerful channel to engage Runic’s customers and prospects.

Benchmarking alone doesn’t provide insight on who’s achieving success via a specific channel. If we look at who gained followers in the last 30 days, we discover that RootMetrics, a company specializing in wireless coverage mapping, made the big play⎯increasing their followers by 200%.

If you’re looking at percentage increases, it’s important to confirm you’re beginning with a respectable base. Adding 20 new followers to a base of 10 is a 200% increase, but isn’t worth getting  fired up over.

In the case of RootMetrics, they’ve grown from a base of 744 followers to 2,226 in 30 days. That’s 1,482 new followers. Movement worth watching and understanding.

Insight: A deeper look reveals that RootMetrics has upped their tweet volume and the number of audience retweets has also increased significantly.

As a marketer in the same industry, I’d be looking closely the level of my Twitter volume and investigating the RootMetric’s tweet topics that resonating enough to merit retweeting.

Again beginning with the benchmark view, we discover that among the GeekWire 200, free online photo editor PicMonkey is the biggest dog on Facebook. But there are several other big dogs nipping at their heels. It’s also interesting to note that the Facebook big dogs are all chasing consumers.

A look at the percentage change growth in Facebook Likes indicates mobile online game developer, Z2, is making a move.

Z2 chalked up a 9x growth spurt in Facebook followers, growing from 1,619 to 16,835 in the last 30 days. Definitely something to know if you’re competing for mobile gaming mind share.

But wait… there’s movement from the back of the pack.

A check of posting activity for the month reveals that DreamBox Learning, creators of math learning games for kids K-5, has drastically increased their Facebook activity in March.

Insight: Big changes in posting volume can highlight a shift in market strategy. If I were competing against DreamBox, I’d be watching their growth in engagement via Likes and Talking About numbers to determine if Facebook is a channel I should leverage more.

Unlike Facebook, there’s only one big dog in the GeekWire 200 when it comes leveraging LinkedIn. Tableau Software, developers of data visualization products for business intelligence, dominates this channel.

Tableau posted to LinkedIn twenty one times in March – approximately once every business day in the month. That’s nearly twice as often as the next tier of companies the pack.

Tableau’s is hitting their target audience.

The content of Tableau’s posts on LinkedIn is resonating with their followers. In March, they received 44 LinkedIn Likes. That number may not seem significant, but it turns out only 16 companies in GeekWire 200 received Update Likes in March. Context is everything. 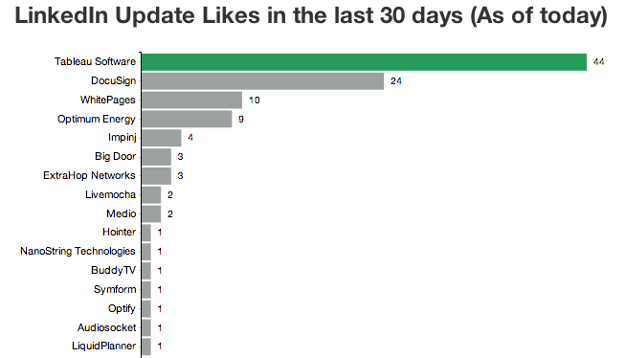 Tableau has significant LinkedIn engagement amongst the GeekWire 200

Insight: Tableau’s domination of LinkedIn stems from both the frequency and quality of their posts. If I were competing against them, I’d closely review Tableau’s LinkedIn content for insights on topics that are top of mind with my audience and use their post frequency to set my activity objectives.

Have we learned from Seattle’s Tech Community?

So while the GeekWire 200 failed to make the case that technology companies are better digital marketers, I think taking a closer look at their efforts yielded some important learning:

Want to Dig Deeper Into the GeekWire 200?

If you want to do your own deeper analysis, Rival IQ is happy to give you access to the data and our analysis tools.  Click here to add the GeekWire 200 profile to your existing account or to signup and we will populate a profile with information on the 297 Seattle Tech companies monitored in this index.

Is Rival IQ Right For You?

[begin shameless plug] If you’re looking for an easy way to benchmark and monitor your market landscape, Rival IQ may be the tool for you. We put the insights outlined in this post and more at your fingertips. Set up is easy and the first 30 days are on us! [end shameless plug]

Hi, I'm John Clark. I am the co-founder & CEO of Rival IQ, the easiest way to build, analyze and monitor your competitive landscape. When I'm not wearing one of my many startup hats, I like to run, golf, read, and practice yoga. If you do any digital marketing at all, I would love you to try Rival IQ, and tell me what you think. You can find me on Twitter, @johnc1n