As any business matures, monetization becomes increasingly important. So it goes with social media platforms, as we’ve seen all the major social channels increase the many ways they try to get more money from marketers, as we all work to show our success and grow our own businesses. The latest example is Twitter Analytics.

Being the curious marketer I am, I gave “quick promote” a test run, hoping to reveal awesome results I could share with you. However, I was left more curious than before, and frankly, a bit frustrated, about Twitter’s objectives and if the investment is actually worth it. 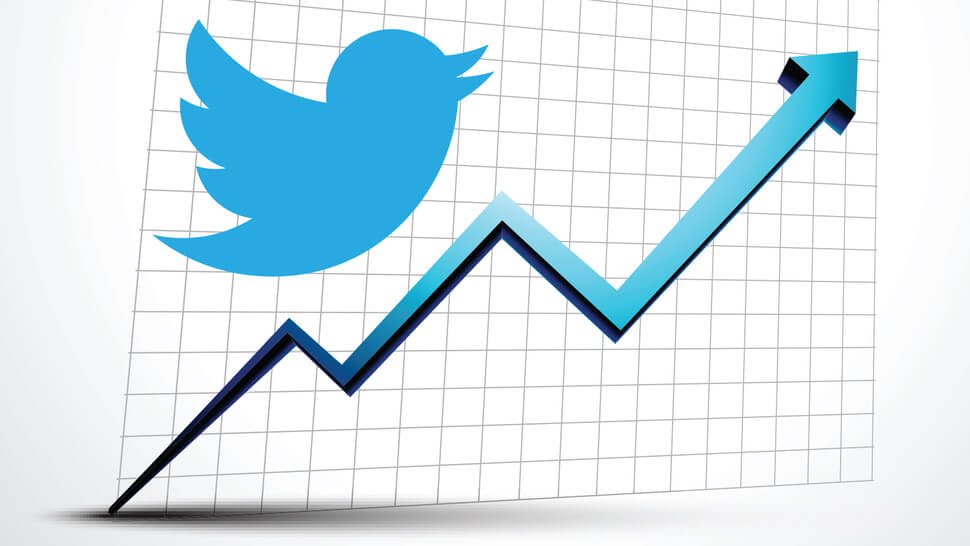 The list of Twitter ad types keeps growing, and I am by no means an expert. However, there is no question that Twitter has become a data geek’s hub for interesting (and sometimes overwhelming) data analysis.

Quick promote allows SMB marketers to promote highly-engaged tweets to targeted users beyond their follower base. Twitter has made it easy to launch a campaign with little brain work and just a few clicks.

You can let Twitter auto detect users with similar profiles and interests to those of your followers, or you can do what we did and specify who exactly you want to target. The first option requires nothing more than a set budget and a credit card. 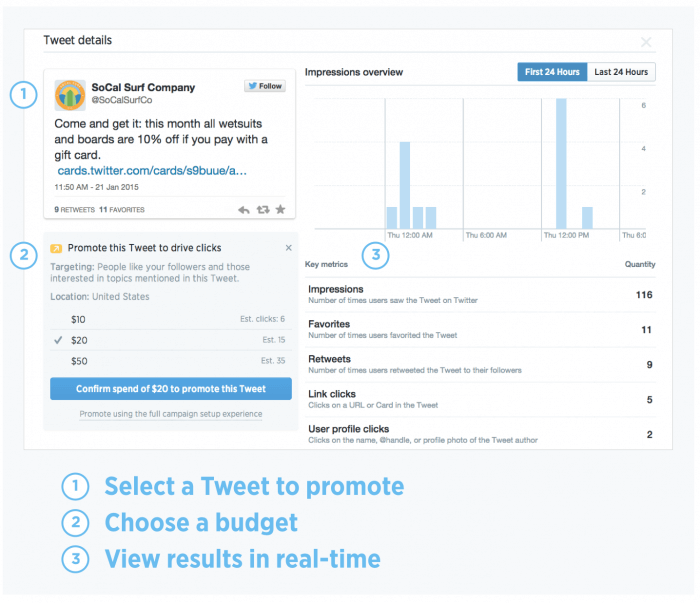 The tweet you promote can be anything from a blog post, to a campaign, to a past promoted tweet. The options are vast and completely up to you. The only suggestion Twitter makes is to pick a tweet that has been live for a bit and received high organic engagement.

According to Twitter, “…users who see a relevant Promoted Tweet from an SMB are also 32% more likely to visit that business.”

So, we decided to give it a run.

We started off by finding two of our most “successful” tweets in terms of engagement. We had an advantage here, as instead of having to wade through Twitter, we went into Rival IQ, and immediately found two of our most engaging tweets from the past 7 days.  You can also use Twitter analytics to do this. 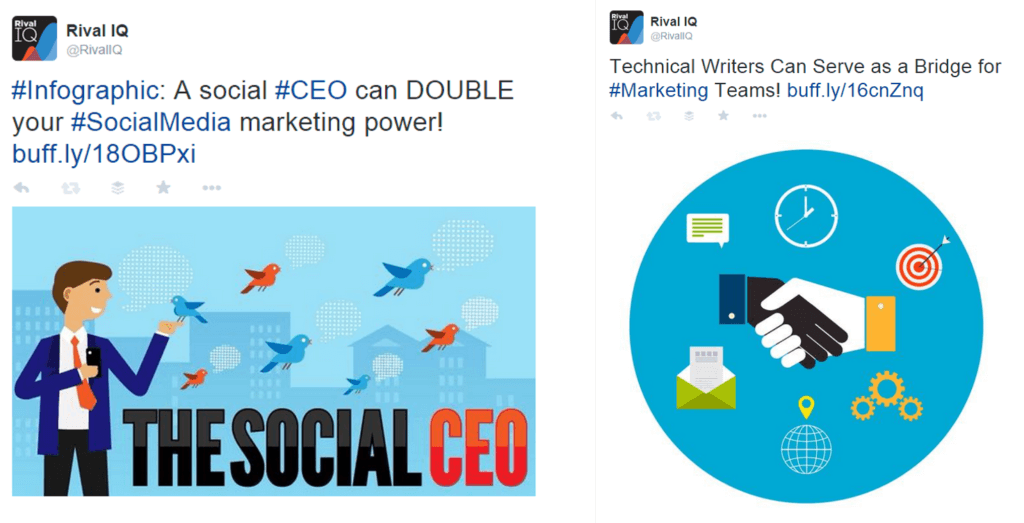 Using these tweets, we launched two mini quick promote campaigns in parallel: one for $10 and one for $20.

Both tweets contained a blog post link and an image. The only difference was one had been published 6 days prior ($10), while the other only a few hours ($20) previous to our test.

24 hours later, the results were in and the outcome was puzzling.

The first two campaigns left us wondering what exactly the difference was in paying $10 versus $20 (two times the amount). The promoted impressions, engagements and engagement rate were practically the same with barely any notably significant difference. Both ran under the same guidelines and were targeted at the same user profile — marketers who would find our content useful. The maximum bid per click was also set the same.

My hypothesis: Even though the first tweet was given a larger budget, the second tweet did better because it had been “live” for several more days. This made us wonder if we should ONLY promote tweets that had been published at least four days previously.

So, we decided to run another set of campaigns using posts with relatively high organic engagement (impressions) that had been published for at least four days and that included the same content variables (image and link) and target demographics as our Phase 1.

We decided to spend $10 per campaign to keep our costs down as we tried to figure this thing out.

My hypothesis:  We have successfully engaged and created a community of Twitter followers who find the content we share useful, so the quick promote is building on our organic engagement – much like PPC can build momentum to your SEO engagement rates.

While the engagement results were promising, I found the inconsistent and unpredictability of the campaigns a bit frustrating. Also, in spite of my research and outreach, I still do not understand how Twitter Analytics determines when you have “exhausted” your campaign funds.  Is it a period of time, engagement rate, some other variable, random? I will tell you it definitely felt random.

Twitter ads are like a puzzle. I keep going back and revisiting the data to find the missing puzzle piece, but I just can’t seem to put my finger down on it.

With platforms changing their algorithms constantly and adding new metrics to track, it is hard to figure out what exactly I should be looking for. I always want to know the answer, and sometimes, such as moments like these, it is just hard.

Overall, I find Twitter ads to be far less fruitful than Facebook ads in regards to engagement rate and clicks. With the same amount of money invested, I accomplished a far larger reach on Facebook than Twitter. However, that was just a basic preliminary test. 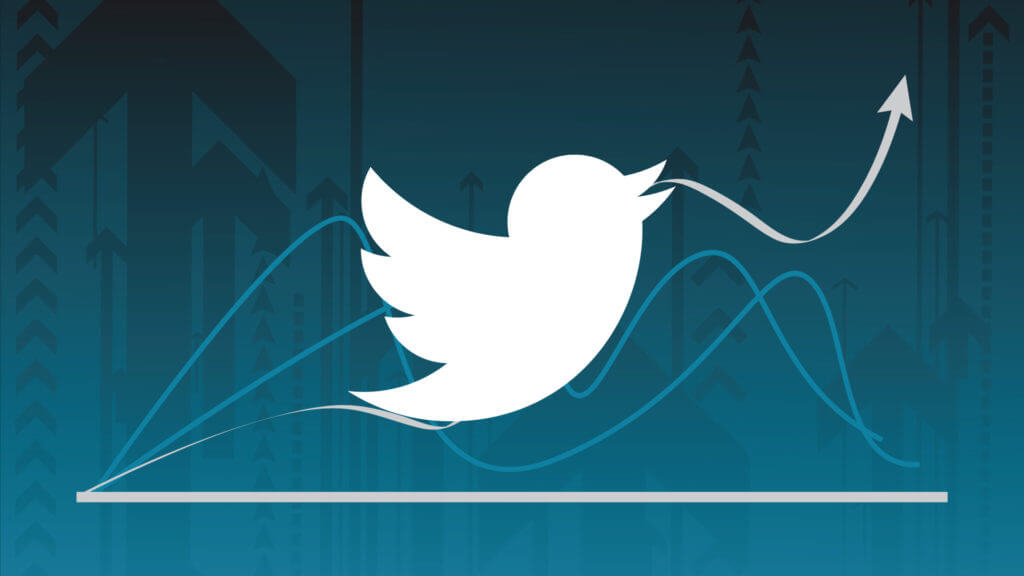 I plan to keep testing the variables: time, content, hashtags, links, images and monetary investment. So, stay tuned to hear more! And I’d love to hear what you’ve learned about quick promote if you’ve also tested this new program. Please share your experiences and learnings in the comment section below.