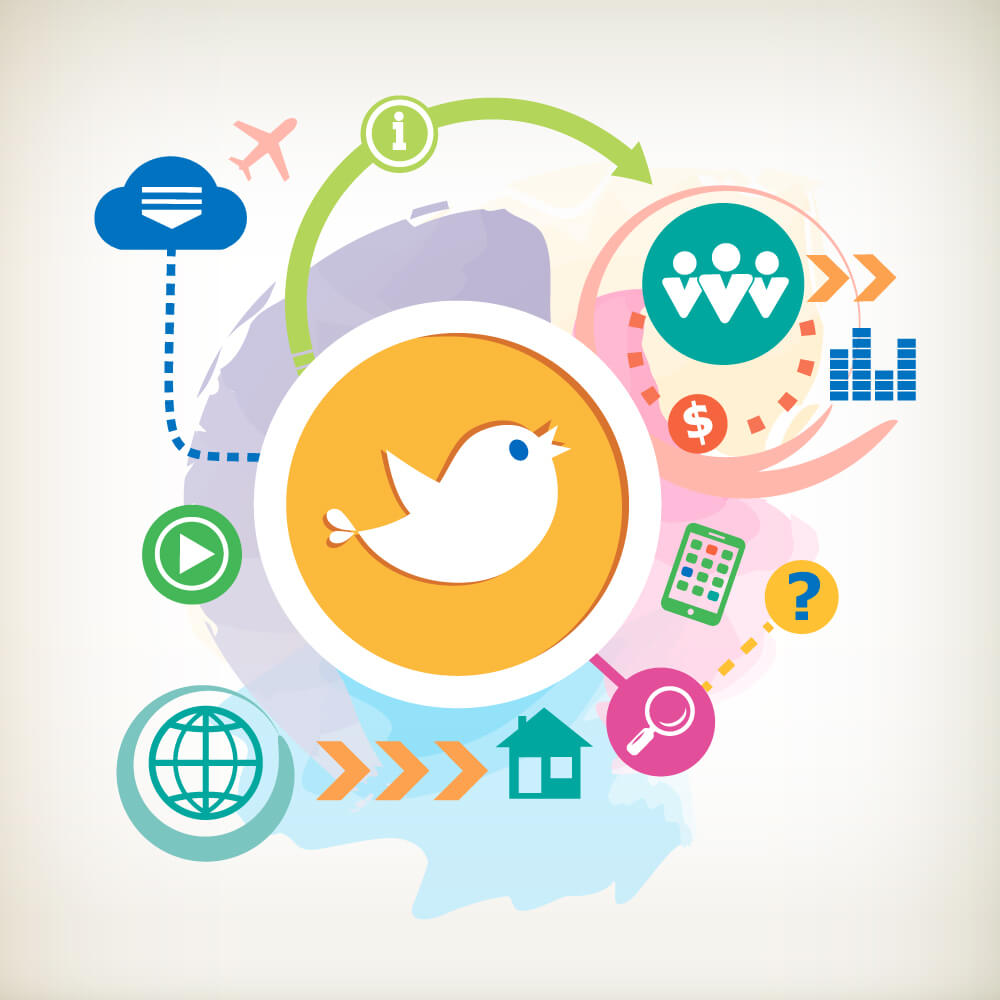 Do You Know Your Competitor’s Influencers and Reach on Twitter?

Twitter has become a critical social media network for companies marketing to both consumers and businesses. From this, there has emerged key influencers for every industry and market that attract a strong following, extend a brand’s reach, influence sentiment and drive conversations about a brand. But can you quickly learn who to follow and engage with, and do you have any idea who is providing top Twitter mentions for your competition and how far that potential reach extends?

These were questions we set out to answer with our new Top Twitter Mentions and Influencers Report.

This report is based on customer feedback and our own market analysis, and we’ve already received an incredibly strong response from our customers that this is exactly what they need.

“This rocks my world! It’s exactly what I wanted around potential reach and competitive analysis.” Cloud Computing Marketing Executive

Many tools have entered the market to help companies identify, follow and engage with key influencers, but this has also added to the general overload of tools marketers must use as well as the challenge around budget and effort to manage these tools.  Typically, these tools focus on one company and do not provide an easy way to identify and follow your competitor’s influencers – or to see how the influencers are extending a competitor’s potential reach on Twitter.

Top Twitter Mentions is an integrated part of our online tool and available as part of every free trial and paid subscription. These new reports help our customers discover, analyze, follow and take other actions with the influential people mentioning them and their competition on Twitter. Within seconds, users can see the top influencers mentioning their competition and the potential reach of those Tweets, as well as analyze the actual content involved.

All the charts and reports can be easily exported for executive reporting, presentations or further detailed analysis.

For this report, we analyze the top 1,000 mentions per day for companies in a competitive Market Landscape (a group of companies in Rival IQ you compare against each other), and then present the top 50 mentions per day per company based on the total potential reach for the mentioners (based on the number of followers the influencer has on Twitter).

The report is organized into three sections: 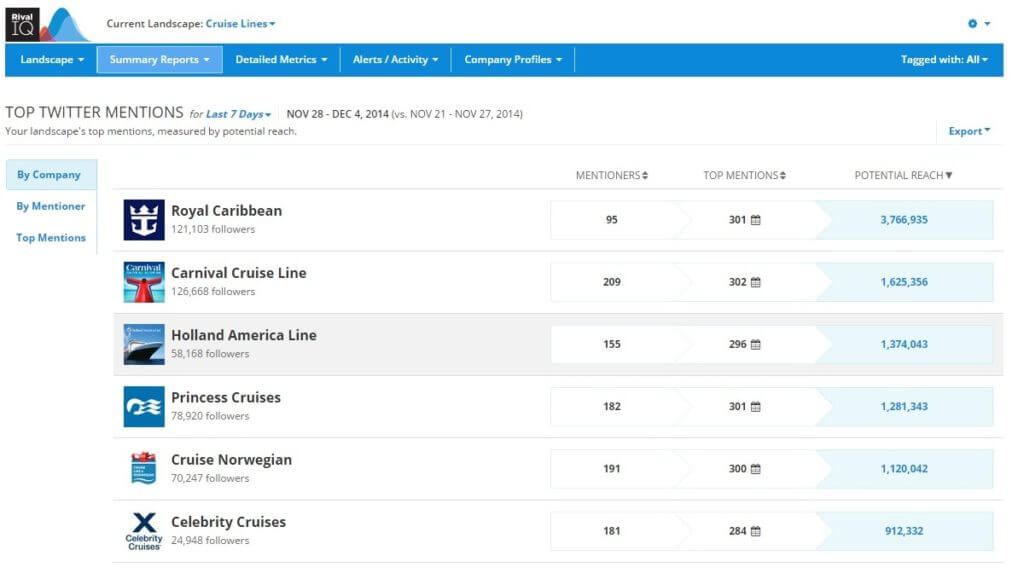 The By Company section takes each company in a competitive Market Landscape and provides a quick overview of the top influencers who mentioned each company during a specific time period, and based on those influencers and mentions, what was the total potential reach of those tweets. With this report, you can quickly benchmark how you are doing against the competition with your influencer strategy and reach.

You can easily sort by mentioners, total mentions and potential reach, which is calculated based on the number of followers the influencers have that mentioned that company. Also, the reports can be immediately exported to PowerPoint, CSV, PNG or PDF. 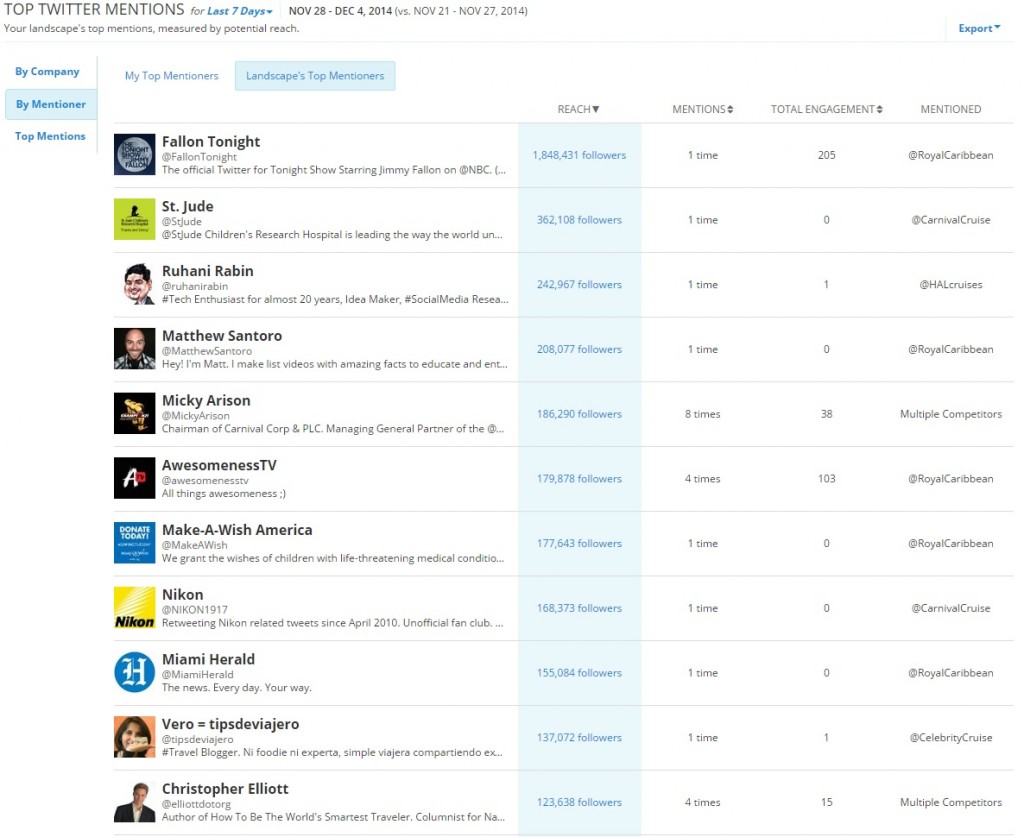 With an easy click, you can start following key influencers

Also, both reports can be immediately downloaded as a CSV file, which includes all top mentioners for the time period, and allows you to slice and dice the data as you want for deeper analysis. 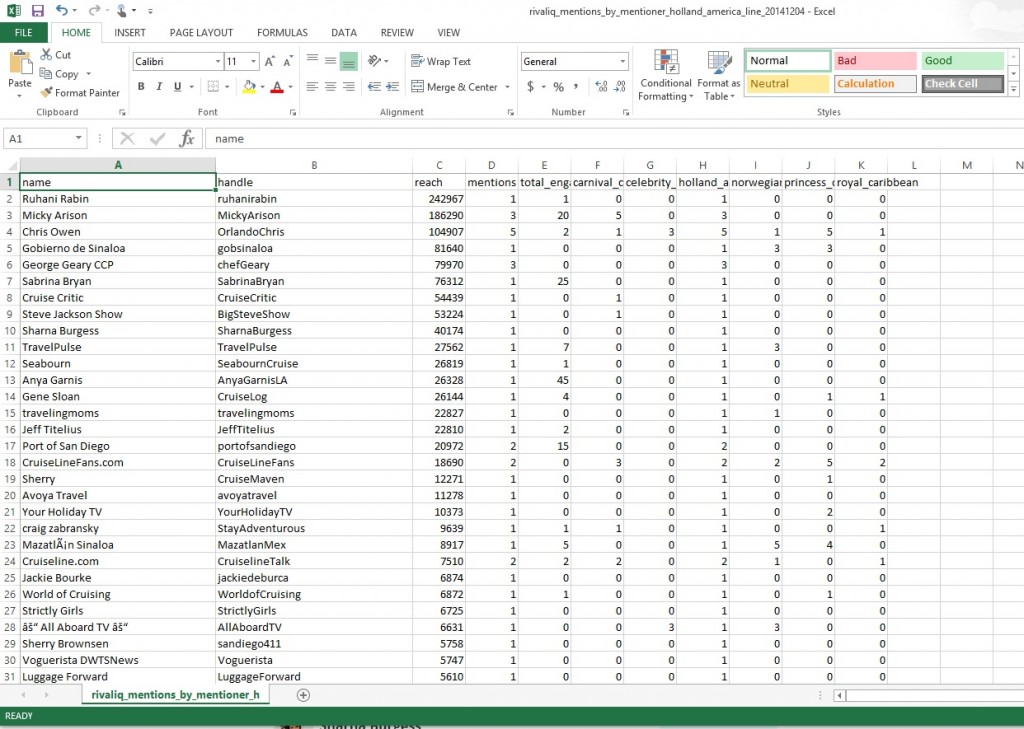 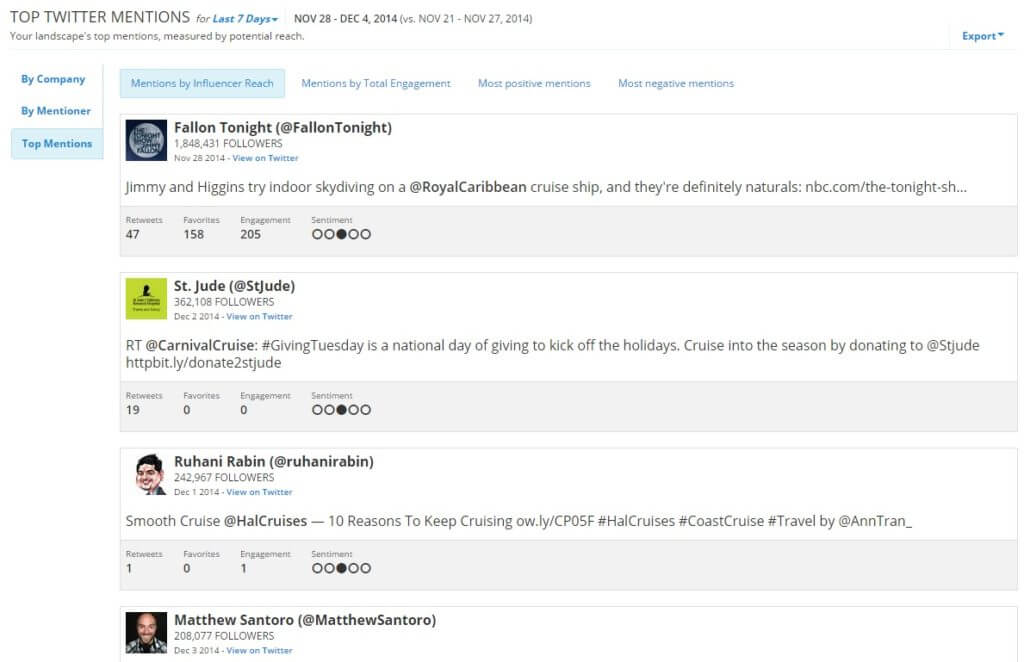 This section presents the top 50 mentions sorted by Total Potential Reach or Total Engagement, which we calculate as all interactions on a social network, so in this case all re-tweets and favorites for a tweet.

This report also presents a Sentiment score for each mention – for which you can view by most positive mentions and most negative mentions. For this, we use a sentiment algorithm based on the Industry Standard Open Source Library for English known as AFINN, which counts words that are considered positive or negative based on an algorithm.

The sentiment is presented on a 5-point scale:

While sentiment is as much of an art as a science, we are seeing many cases where this report does catch negative mentions that could damage a brand’s reputation, as the negative mentions from this Cruise Line Landscape reveals. 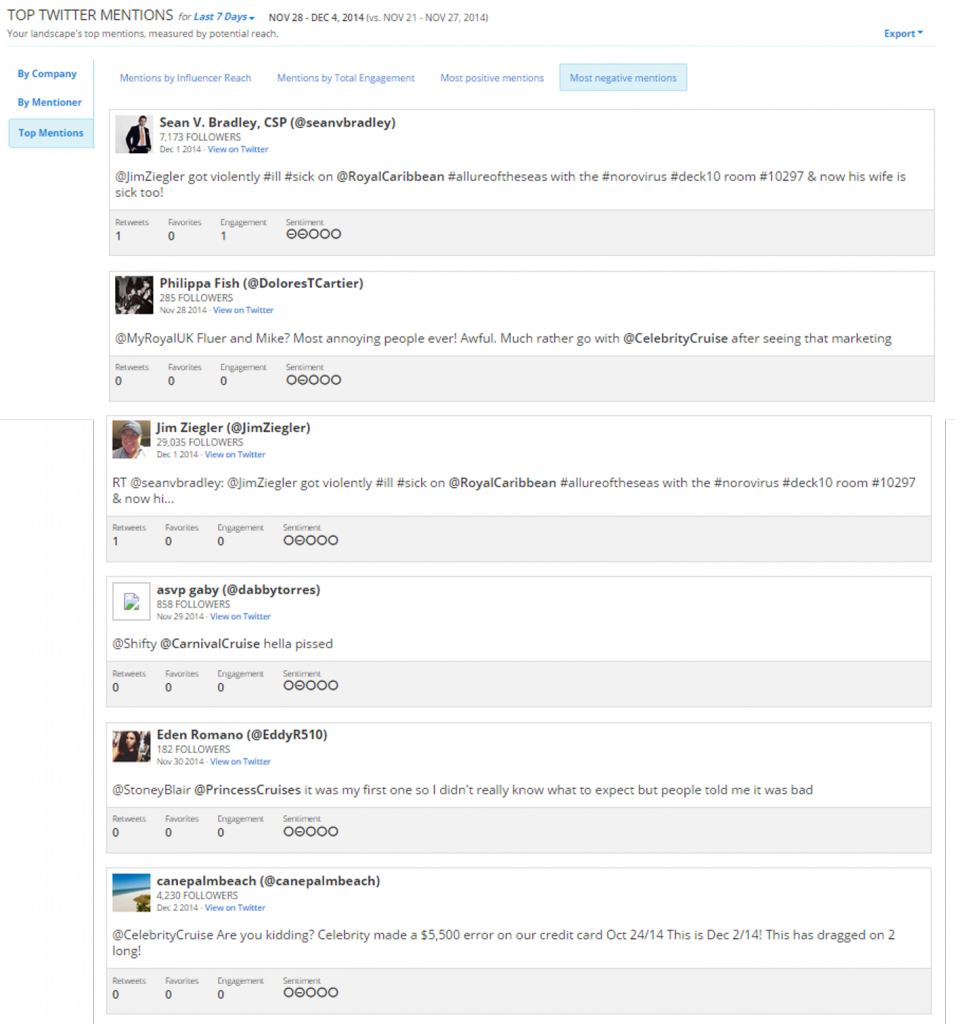 You don’t have to spend hours wading through tweets and profiles to figure out who is influencing your market or extending your competitors’ message.  Now with just a click, you can make sure you are following those important Twitter profiles that know your competitive market.  And you can use just one tool for all your social media analytics, SEO keyword rankings, website content and top twitter mentions analysis.

Give us a try, and maybe you’ll have this response, too:

“Holy sh**. That’s awesome. I love it. We are going to plug in on this right now.”  Leading Marketing Consultant and Influencer

Love this Cruise Line Landscape? You can clone it by clicking here and starting your own 14-day free trial.