Do Startups Need to Change the World?

Last week I attended and spoke at the International Startup Festival in Montreal.  This event, if you have not attended, is unique among conferences. It is a strange yet energizing combination of an unconference, a hackathon, Shark Tank, the Web Summit and TED Talks, with a sprinkling of Burning Man.

The quality of speakers this year was incredible.  I honestly cannot remember going to any conference where every single keynote and session had me completely engaged, not to mention laughing (which in my case involves snorting), crying and thinking about my life, work and legacy.

There were some consistent themes in all the stories and advice provided to the hundreds of entrepreneurs or startup wannabes attending:  Follow your passion. Take risks.  Measure everything. Work hard.  And Change the World. 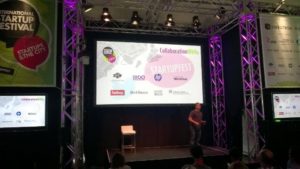 Entrepreneurs on a mission to do more

Isn’t it amazing enough that entrepreneurs represent a small minority of the working population? Is it really up to startups to change the world?  What about the company giants like Coca Cola or Apple?  Again and again, the men and women who started companies, usually many times, and have been successful, felt an obligation not just to take the money, buy an island somewhere and kick back, but in fact,to do just the opposite.

These incredible business leaders and startup junkies are on a mission, and they want every single entrepreneur to find a way to not only have a successful company (we all know how many startups fail), but then to use that success to leave the world a better place.

Startups changing the world one city, one block and one person at a time

The world change can be small steps.  Take the Better Block founder Jason Roberts, who literally is changing his world block by block, trying to improve the way people in Dallas live, commune and travel around the city.  This man had a vision for a Dallas with sidewalk cafe’s, kids on bikes, people just enjoying each other, and even, a streetcar.  His inspiration has spread around the nation and the world to places as different from Dallas as Tehran, Iran. 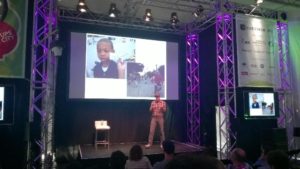 Jason reminded me a bit of Paul Allen, who singlehandedly has done more to renew parts of Seattle than any other entrepreneur I can think of.  Only Jason is doing it with very little money or organization.

Jason was not alone in working to make the cities where we live better.  In the case of former IBM Smarter Cities pioneer, Dr. Colin Harrison, the mission is to make sure we have enough water, food and infrastructure to support the cities of the future. Harrison, whose casual style and humility only slightly camouflages his genius, pushed everyone to use innovation to address the issues driven by a fast-growing urban population.

What will be your legacy?

When it comes to leaving a legacy, Lia Grimanis, a former Tibco executive and entrepreneur, is showing us how.  Grimanis took her humble experience as a homeless teenager into a plan to increase the number of homeless women who have jobs and don’t end up back in the shelter.

Her non-profit is Up With Women, which is creating success stories every day. In her free time, Lia can also be seen pulling 10,000 pound trucks, feeding (and fighting with) sharks, riding motorcycles fast and other everyday activities!  A hard act to follow, but one we can all try to emulate even slightly.

Some of the speakers did have galactic dreams, literally.  Adeo Ressi of the Founder Institute, urged attendees to wake up and dream big.  Not everyone is buds with Elon Musk and can put money toward developing a space rocket but that is one way Adeo is changing the world. 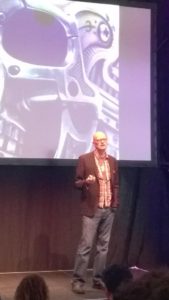 Adeo Ressi of the Founder Institute urged the audience to dream big!

Montreal – a hot bed of entrepreneurialism

The fact this was held in Montreal and attracted world-class speakers surprises some people.  But I believe Montreal is a hot bed for innovation and for startups.  It has world-class universities, a young, highly educated workforce, and an increasing number of angel investors and incubators working to provide support and an ecosystem for entrepreneurs.  All that plus amazing history, architecture, food, wine, coffee and music! A perfect venue for dreaming big.

So, what will you and your startup do to change the world?