Facebook has been rolling out some interesting changes lately that may make marketing more productive, and it looks like more changes might be on the way. Not all the new features are strictly designed for marketing, but they will certainly enhance how Facebook marketing works. Check out these four new features!

The skyrocketing popularity of live-stream apps must have made quite an impression on Facebook developers. After beta testing a new live-streaming feature on the celebrity crowd, Facebook will be releasing it into the wild for anyone to use. (it’s available for U.S. iPhone users now).

I’ve participated in several of these chats, and they are pretty impressive. Since they pop up right in the feed of your most engaged users, and don’t require logging into a different program or opening another window, there’s an immediate feel to the feature. It just seems easier than everything else.

The video itself is beautiful – high def, and smooth, without the glitches and freezes that plague most of the other livestream options. It’s a one-person stream – no option to add others to the conversation, but viewers can type in questions and comments. Strangely, that is a little less smooth. While participating in a marketing livestream with about 40 viewers, the comment stream hit that wall. I could still comment, but the feed did not refresh, so I could not see comments typed by others after a certain point.

On December 2, Robert Reich went live from his office at Cambridge to talk politics and answer questions. So far, 82,742 people have watched. If I remember correctly, about 40k were watching live (I was one of them).

This is a huge opportunity for brands to get personal with their followers. Marketers are all over Periscope, Meerkat and Blab, and they are great…but not ubiquitous. Facebook already has 1.55 billion users. BILLION. Your audience is already there. No need for them to download a new app and learn how to use it, locate your stream, and figure out what the little hearts are for. They just click on a video that’s happening right now and start typing in the same window they are accustomed to.

This feature is still largely unknown, so it is the perfect opportunity for companies to be early responders. Pick a hot-button subject your audience asks about a lot, and publicize your upcoming live chat a few days in advance. 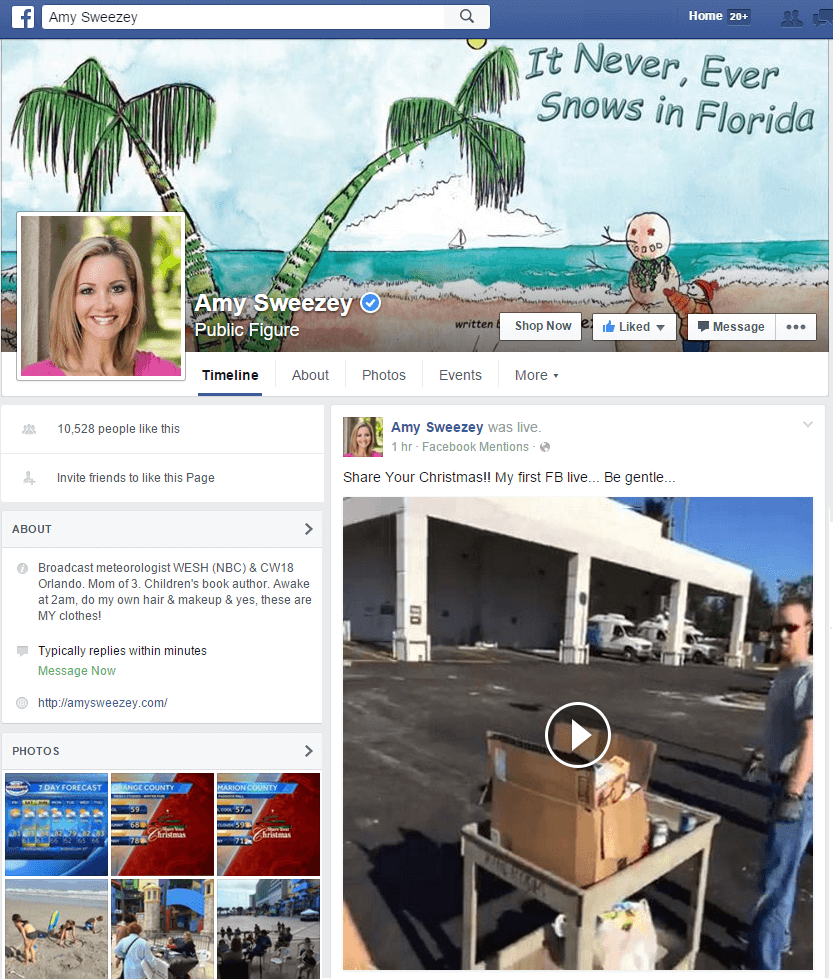 Facebook is calling another cool new feature “Collages.” Making a collage from a photo album is easy. Social influencer Brian Fanzo created this video collage from his visit to the Dell Social360 Event. Photos merge together in succession (you can change the order) and you can add title text that floats on top.

Brands can take advantage of this feature to highlight events, introduce the staff, show products, or tell a story by holding up cards. You might even invite your customers to send in photos relating to your brand – people wearing your logo shirts or using your products. This Facebook marketing feature is a great way to humanize your brand and show some personality — not to mention getting readers to participate.

If you’re using Facebook for customer service, the new response time feature will come in handy to let readers know how soon you will reply. Your response time choices are:

You can also let visitors know when you’re not monitoring the account, say if the staff is off for the holidays.

You’ll also notice some big changes to your inbox. It’s easier to see previous conversations with people who message you, and a column on the right of the message displays the public information of the person’s profile, like location and company. You can add notes to the message to identify loyal customers, shopping preferences, or other information that makes future interactions more intuitive.

Page admins also have the ability to prioritize messages for followup by importance, so your reps can see which interactions need immediate attention. If you think it’s sounding almost like CRM is in the works, well, we can only speculate.

After all the insults Facebook has dealt business while tinkering with display and feed changes, the new features are a welcome and much-needed addition. Get cozy with them fast – you know how quickly things change. Early adopters tend to win on the web, and inline Facebook videos could become the next big thing. What are some Facebook marketing features you really enjoy using?