This past week I attended the GigaOm Structure 2014 conference in San Francisco – an event that has grown in size and stature over the past seven years.

Structure has been known as the edgier, cooler and start-up/VC-focused cloud show. It still tends to be less “conferencey” with keynotes done as casual coffee chats and a minimal number of deaths by PPT presentations. However, over the years, GigaOm has evolved and feels more corporate than it used to. The “cool kids” were still there, but there were also more big company dollars and vendor pitches.

One of the aspects I’ve always liked about Structure is the extremely active, humorous and sometimes downright snarky Twitter dialogue transpiring around and during the conference sessions. Based on this, and the large sponsor roster, I decided to see which sponsors won the Twitter mindshare battle during the show. My analysis included the headline sponsor, Intel; the product showcase sponsor, Rackspace; and all 25 Primetime sponsors, which were mostly larger vendors but still ranged from the more emerging Coho Data and FoundationDB to the massive GE and Cisco’s of the world.

First, as a foundation, Intel has by far the largest Twitter following, dwarfing even companies as big or bigger than the chip giant, which touts more than 3 million followers. The second closest sponsor is General Electric with more than 240,000 followers. Below that you have Qualcomm, SAP and HP Helion topping 100k, and a continued decline to the bottom with BTI Systems and 616 followers.

Intel, however, is not the most prolific tweeter, nor is GE. 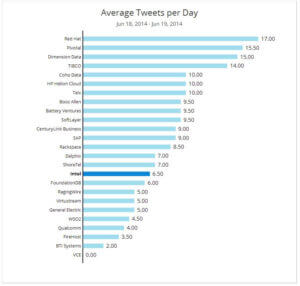 Red Hat, Pivotal, Dimension Data & Tibco were the most prolific tweeters during Structure

During this two day period overall, Red Hat wins in number of tweets at 17 on average per day, followed by Pivotal, Dimension Data and TIBCO. I don’t know what’s going on over at GE, but they only averaged 5 tweets per day during these two days (and as I discuss below, they did not do well in engaging or interacting with their followers either).

But as we all know in the Twittersphere, it’s not just about quantity but more about quality of content and the engagement with your followers and the overall social network. Also, it’s vital that marketers can see a correlation between the social engagement the company is achieving and the business impact (aka revenue). For example, did the tweets drive more booth or session traffic, which resulted in a strong lead pipeline, which then led to a closed deal? 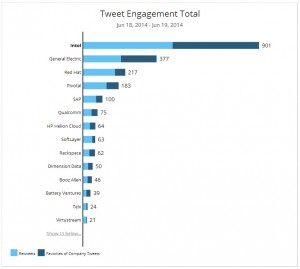 From a Total Engagement perspective, the big players again stood apart, with Intel’s combination of favorites and retweets topping 901. GE came in second once again with a total of 377, followed by Red Hat with 217. However, keep in mind, this is TOTAL interactions for these companies. And these are huge companies tweeting about everything from the invisible tail of the moon (Intel) to birthday wishes to mathematician Blaise Pascal.

When you start looking at the more cloud focused companies and Structure specifically, it’s a different story, with Rackspace, Red Hat and Pivotal owning the best content based on Engagement Total. 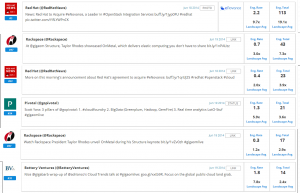 Top content specifically about Structure based on Total Engagement

This validates that aligning product news to event presence and integrating with other marketing channels, like social, still works. (how many marketers out there have had engineers ask, “why do I have to time my product launch to a stupid event?)

Dig down a bit more and look at Engagement Rate and the best content by companies tweeting about Structure and interacting with their followers, and it evolves again, BTI Systems, Dimension Data, Virtustream, Raging Wire, Coho Data, Battery Ventures and Pivotal had the most top 50 tweets for Structure, sorted by Engagement Rate. 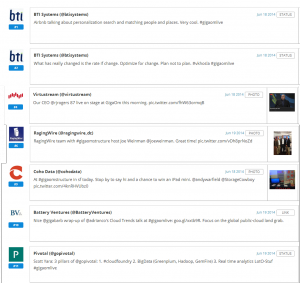 BTI, Virtustream, Raging wire and others had the most engaging content by Engagement Rate

As you can see from this chart, Engagement Rate levels the playing field a bit as it looks at each company’s followers and how they are engaging, rationalizing the interactions.

Sponsors and companies aside, there were some awesome tweets during the Structure show by attendees or other groups.  Here are some of the top tweets by engagement. 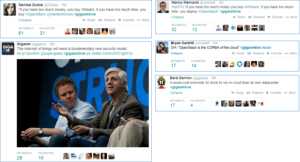