I love hashtags. In fact, the first thing I did after getting engaged was send my family some wedding hashtag options to vote on (yes, I’ve got the social media bug bad!). So I thought I’d share my love of hashtags and dig into some tips to help all the marketing superheroes out there — starting with Facebook! 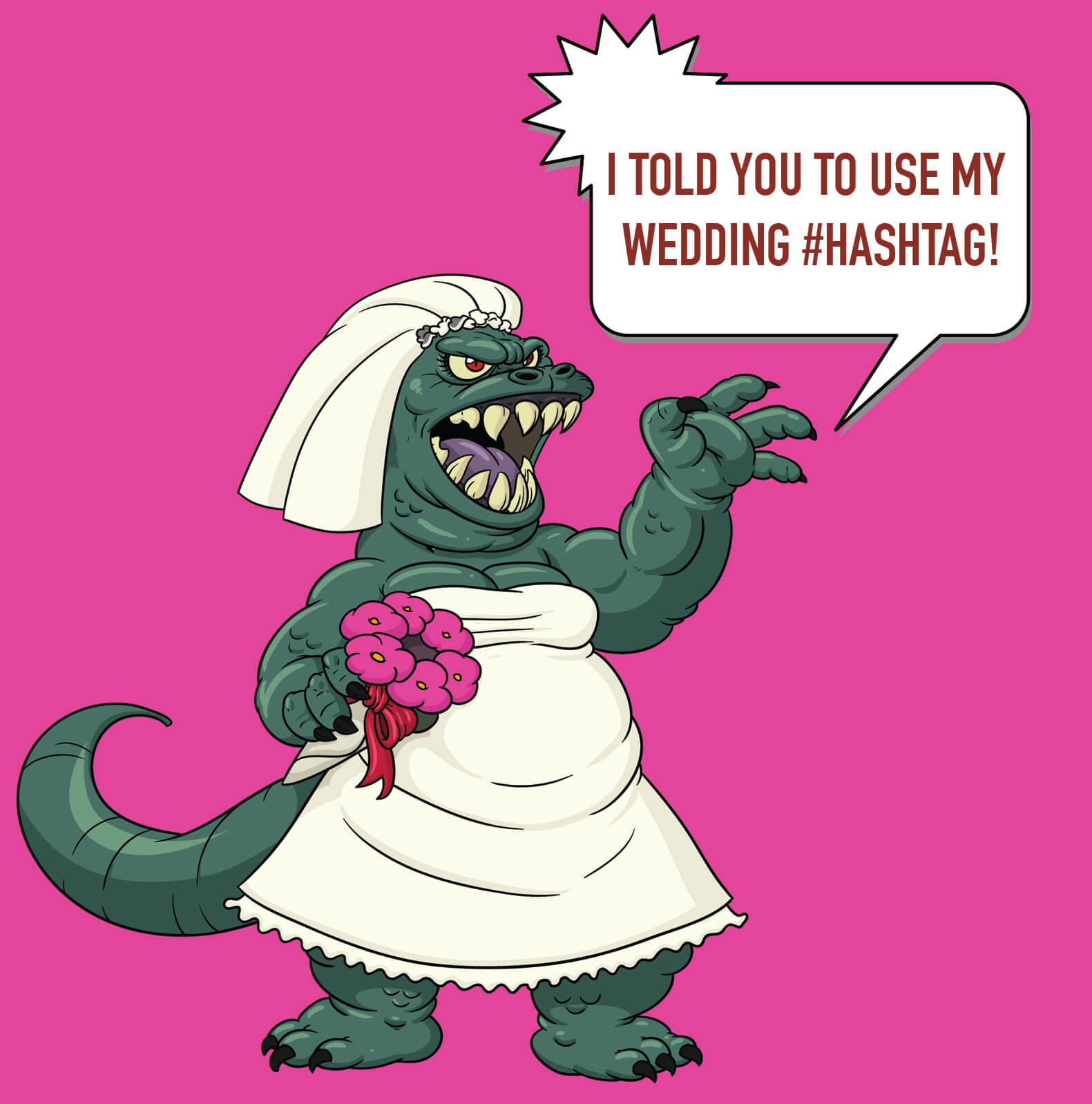 Facebook didn’t add hashtag search and aggregation until June 2013.  The social network was a bit late to the game, as by that time, people were using hashtags all over social media and even in text messages, emails and everyday conversation (as in “hashtag LOL”).

While Facebook has embraced hashtags in posts and search queries, your hashtags will not necessarily achieve a wide reach. Why? Because of Facebook’s privacy settings. Since most members’ posts are private, meaning they only share content with friends, a post that contains a hashtag will only appear in a “friend’s” hashtag search.

If you are creating a post with hashtags and want to reach a broad set of Facebook users, make sure to set your post settings to public. Also, hashtags in comments don’t show up in searches.

This is why a Facebook campaign like the one below is a waste of your time, because it won’t work. 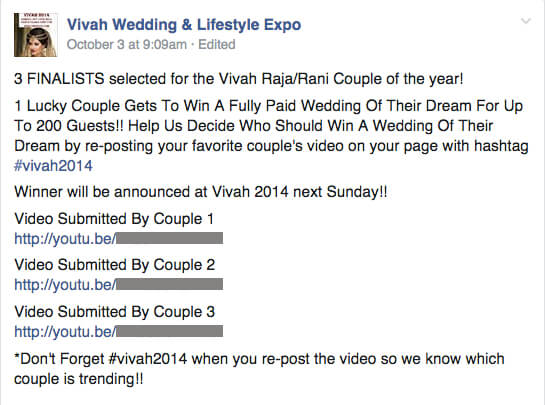 The reason? It’s simple. If you expect Facebook users to vote by posting on their own personal profile using your campaign hashtag, the chances of the vote appearing in Facebook’s hashtag search (so you can tally the results) depends on the individual’s privacy settings which is typically private. To confirm this, I ran a quick search on the campaign hashtag and found only posts by public pages and only 2 from personal accounts.

Studies show that you shouldn’t use more than one to two relevant hashtags. I know it’s really tempting to get high on hashtags, but don’t do it! No one likes a spammer, and it ends up polluting your message – making it hard to read.  Hashtags are designed to point people to other relevant posts. Pick which posts you associate with carefully by picking the most relevant hashtags. Use services such as Hashtagify.me to find other trending hashtags related to your specific tag. 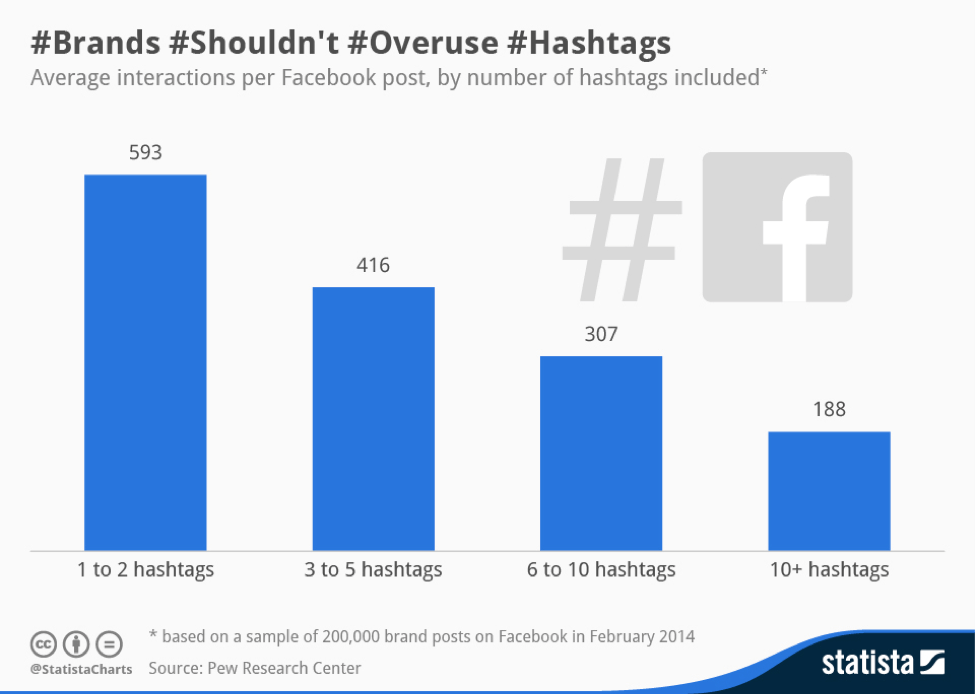 #FBHashtagTip 3: Use hashtags that make sense and are relevant

The whole point of a hashtag is it allows people to filter and find relevant content. If you are hosting an event, make sure you have a defined hashtag, so when guests and attendees post, the shared content is all aggregated under one search filter. Have I used the word “relevant” enough yet?  Well, I can’t really emphasize this enough.  And the relevance is to YOUR target audience.

If you want to create your own hashtag, keep it simple. The simpler the hashtags, the easier it is for people to remember it. The last thing you want is people not knowing what your hashtag means and flipping letters or words around. Or better yet, forgetting it completely and taking on the task of making up a new hashtag all together.  Alternatively, don’t oversimplify a hashtag where no one knows what it stands for (making it actually too complex). I’ve seen this simplification issue all the time at events, where the organizers either create an overly simple acronym that no one can remember or no one searches for. OR even better, it’s so simple that it can work for literally anything and isn’t really unique at all.

Don’t piggyback on hashtags that have nothing to do with your content just for the sake of gaining traffic. While it’s tempting, don’t abuse the power of the hashtag and ruin your reputation. I don’t think I can ever take this law firm seriously nor would I ever hire them to represent me, even if I felt like #YOLO’ing: 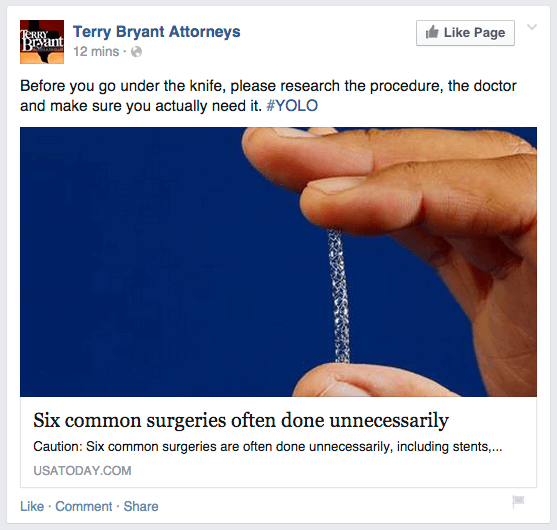 Think about hashtags as an integrated marketing strategy! If there is a particular hashtag you are using on Twitter, Instagram, Google+, etc. be sure to include it on Facebook too. Cross platform branding is import – keep it consistent. This aligns with the basics of company branding with a social edge.

Each hashtag on Facebook has its own unique URL. For example, the URL for #ContentMarketing is: facebook.com/hashtag/contentmarketing. If you are trying to create a conversation and build community around a particular topic, then drive traffic to that particular URL. Your audience can compose posts directly from the feed.

May the #HashtagForce be with you!

Hashtags are powerful, if you use them correctly.  Use these tips to raise your hashtag IQ, and remember to always use your #HashtagForce for good, not evil!