The Importance of Becoming a Twitter Expert: Fashion Edition

Unless you live under a rock, you know that Twitter is critical to your marketing strategy. But what separates a Twitter novice from a Twitter superstar? In order to answer this question, I’ve decided to follow three of my favorite designer brands in Rival IQ. These three brands, Gucci, Prada, and Burberry, will partake in a friendly match for the title of “Queen of Twitter”. The goal here is to learn from their Twitter successes as well as their mistakes, so we too can be Queens of Twitter. Let’s get moving!

It’s shocking to me how often I come across a really, really awful Twitter description. I’m not sure if it’s because companies don’t understand how powerful a great description can be, or if they don’t realize that their descriptions just aren’t that good. To demonstrate the importance of a great Twitter description, allow me to introduce you to a day in the life of Danielle (me) on Twitter in just 5 steps.

I don’t have the time or patience to go to the about page of every company I stumble across on Twitter. It’s much easier for me to read the 160 character description on their Twitter page. If the description sucks, they’ve lost me. If it is intriguing and gets me giddy like a 14 year-old girl who just met Justin Bieber, you best believe that I’m going to head over to their website and dive in deeper. With that said, lets see which one of these huge Fashion houses takes the cake for best Twitter description. I think you might be surprised. I sure was. 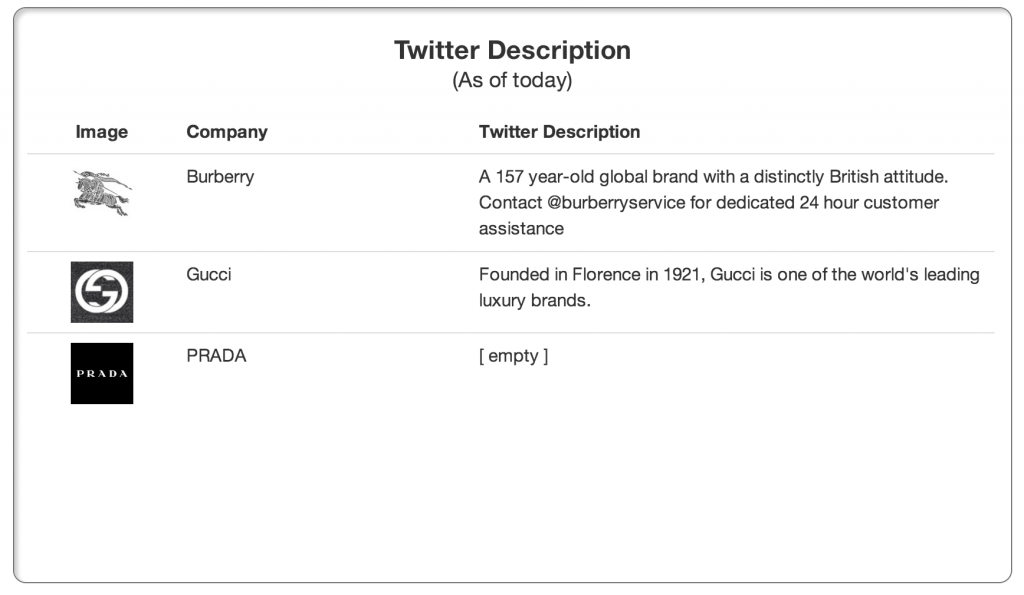 The Twitter description is prime real estate that you should be taking advantage of.

Prada: Seriously, Prada? You spend so much time creating the most amazing purses ever, but you can’t take 10 minutes to come up with a Twitter description? Consider me disappointed. But in all seriousness, this is a huge marketing faux pas. The description is a place to set your company apart from your competition. It’s your shot to grab people’s attentions and convince them in 160 characters or less that you are as much of a bad ass as Anna Wintour herself. To not take advantage of that prime “real estate” is like having an amazing Birkin that just sits in your closet (ie a huge waste).

Gucci: Gucci is a luxury brand that has had a loyal following for years. Let’s see if their Twitter description is equally as awesome as their Bamboo shopper tote I’ve been lusting over.

Gucci does a good job of gaining credibility by listing their “bragging rights”, but their description leaves me bored and wishing they were a little more creative. While the Gucci brand exudes luxury and sophistication, I do not think it would hurt to add a little bit of fun to their description.

Burberry: Burberry’s description is, as the British put it, “mint” (American translation: awesome). Let’s break the description apart into its three core components.

There you have it, a Twitter description trifecta. Not only do they appeal to long time, loyal customers, their fun and quirky side attracts a younger crowd as well. Great job, Burberry!

Things you might want to consider incorporating into your own descriptions:

To learn more about how you can ensure you have a killer Twitter description, check out John Clark’s latest post to learn all there is to know (he also happens to be Rival IQ’s very well dressed CEO).

Creating a Twitter account and having a good description are only the first steps to being successful on Twitter. You obviously can’t have a Twitter presence if you aren’t actually present. In order to grow your followers and increase engagement, you have to be posting regularly.

You might be asking yourself, “how often is often enough?”. Think about it this way, unless a person is going directly to your company Twitter page to read your tweets (not very likely), the only time your Tweets reach them is in their feed. The Twitter feed runs in real time, so if a person is following 300 people on Twitter, there is a humongous chance your Tweet will come and go without ever being seen. This is why it is so important to be Tweeting very often – you want to ensure that at least one of your Tweets will be seen by your followers.

Now back to the question of when is often enough. Sadly, I don’t have an exact answer for you. Some people say that there is no limit to how much you should Tweet, others say that Tweeting too often is disadvantageous. I think the more important thing to keep in mind (rather than obsessing over the perfect number of times to Tweet a day) is to put your focus on staying engaged and present on Twitter. Think of Twitter as a way to interact with others, not just a means of posting your own content or your brand updates. Knowing how to engage on Twitter is very important, and another blog post in itself! For now, I recommend checking out New Media Force’s infographic. It does a good job at giving suggestions of how much to Tweet, when to Tweet, and what to Tweet. 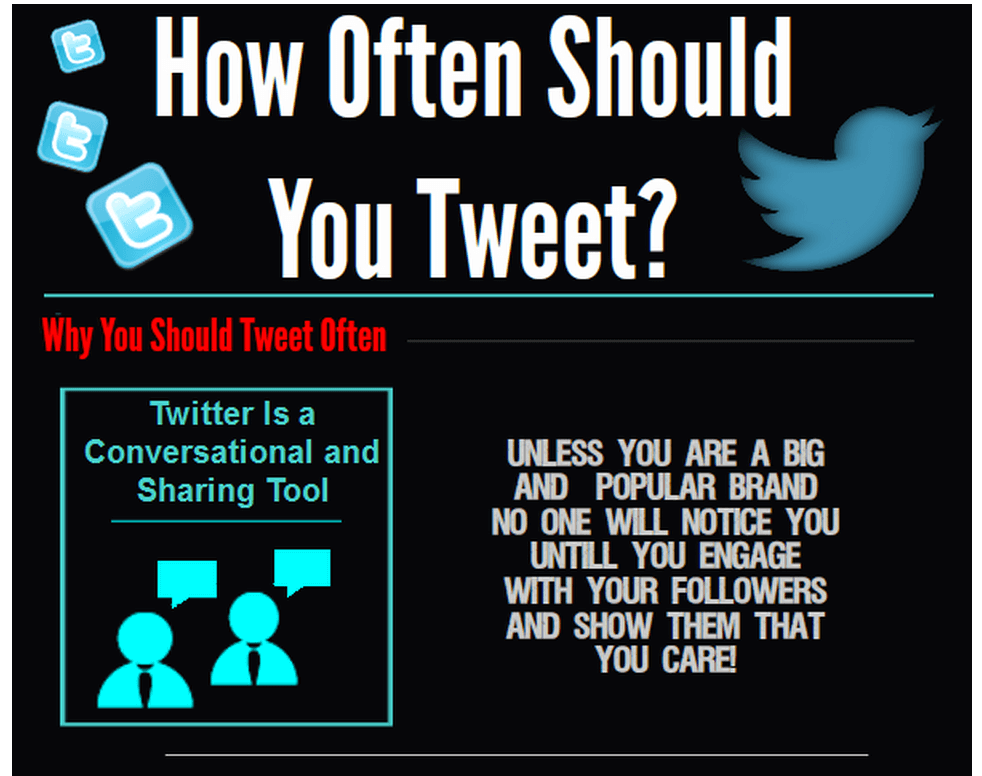 Click on the image above to learn how often and what times you should be Tweeting!

It’s also smart to take note that very large companies might not need to Tweet as often, since they already have a following outside of Twitter. On the flipside, if you are a small company trying to spread the word of your product or service, you should 100% be Tweeting frequently throughout the day. New Media Force recommends Tweeting as much as one to two times per hour.

Since this is a post comparing some of my favorite brands, let’s move on from that very long intro and look at the stats and see which of these Fashion labels is bringing their Twitter A-game. 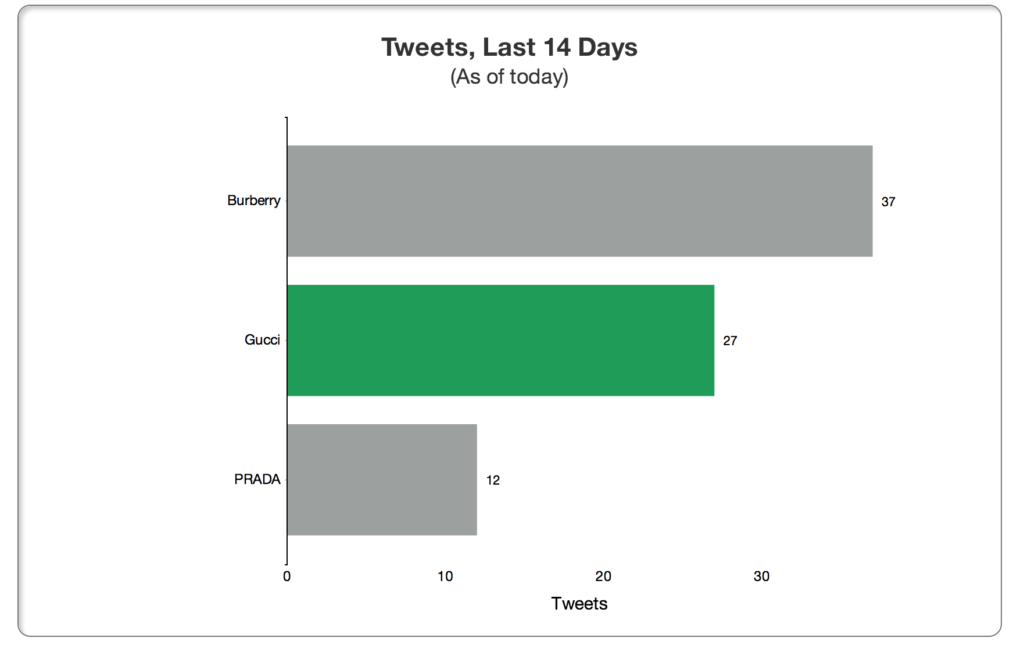 If you want to be seen in your followers Twitter feeds, Tweeting regularly is a must.

Prada: I think we’re beginning to see a trend here. With only twelve Tweets over a fourteen day period, Prada is not doing what it takes to make their presence known on Twitter. With the average Twitter user following 51 people, most of whom Tweet multiple times a day, there is a large chance that Prada’s Tweets are getting lost in the stream. My advice to Prada is simple, Tweet more!

Gucci: At twenty-seven Tweets over a fourteen day period, Gucci is doing much better than Prada. That’s a little over two Tweets a day, which with strategic timing kept in mind, could have some good reach.

Burberry: It seems Burberry is on a mission to be the Fashion Queen of Twitter. At thirty-seven Tweets over a fourteen day period, Burberry seems to have a very good grasp on engagement.

Something else that’s interesting to pay attention to is the correlation between number of tweets and amount of retweets. 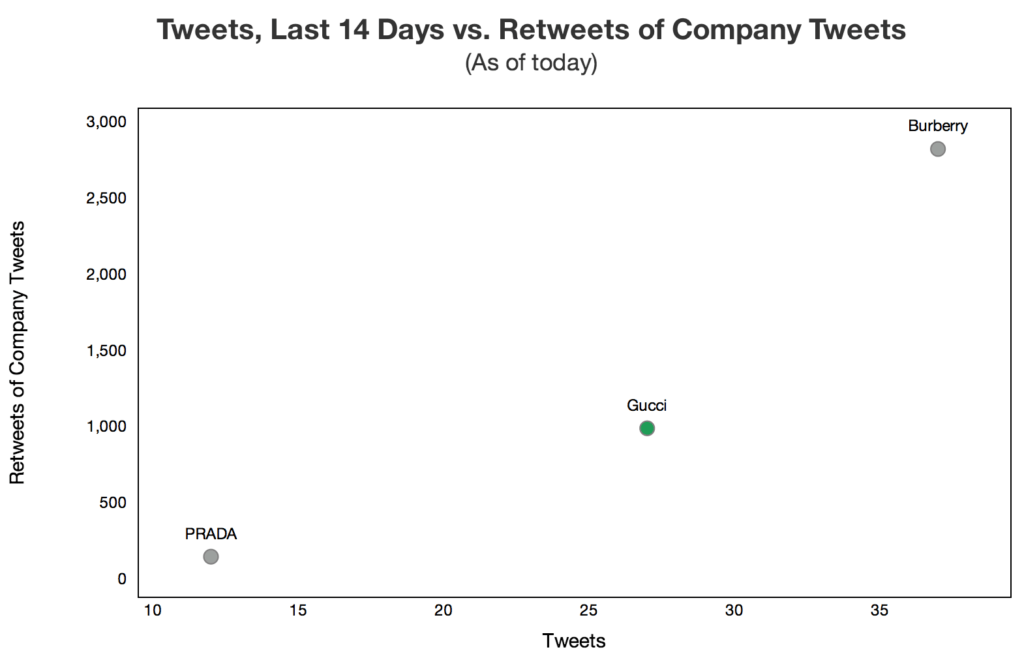 It appears that there is a direct correlation between the amount of times companies Tweet vs the number of retweets. Keep this in mind when considering how to raise brand awareness.

As you can see, there is a direct correlation between number of Tweets and number of retweets. While this correlation is quite an obvious one, it is still very powerful from a business perspective and one you don’t want to ignore. According to this trend, the more times you Tweet the more the word of your company spreads. Be sure to provide as many opportunities for your followers to retweet your stuff (ie tweet more) and, as a result, increase brand awareness!

Burberry!!! Clearly, when it comes to Twitter, it seems that the Brits do it best.

The Proof is in the Pudding (Twitter Champion Reveal)

In boxing, there are twelve rounds to a championship match. On the rare occasion, a really amazing boxer comes around and finishes his/her opponent off in just a few. It appears that Burberry is the Muhammed Ali of Twitter, because they straight up crushed the competition in two rounds flat! Burberry’s engagement attempts on Twitter are unparalleled. As a token of recognition for their amazing Twitter champion status, I think that this song is appropriate (plus, it reminds me of The Parent Trap).

Now for a little deep thinking: What does this really mean for Burberry? Does this even affect their business? After visiting Google Finance and doing a little poking around, I came across two articles that I found particularly interesting.

The first article reported on Prada’s first quarter, through April 2013: “Although business is still booming for the Milan-based luxury label, revenue growth has significantly decelerated in recent months, down from the blistering pace recorded throughout most of 2012.” The second article I read reported record sales and profit at Burberry Group. This is clearly depicted in the two graphs below, courtesy of Google Finance.

The cooling trend at Prada is made clear by their steady decrease in share value throughout the month of April, 2013.

The value of Burberry’s shares increased throughout the month of April, 2013.

What’s most interesting to point out is that in the month of April, Prada had less than 20,000 Twitter followers, while Burberry had over one million! Does this mean that if Prada had a stronger Twitter presence, their cooling trend would heat up? Sadly, as much as I would like to be a fortune teller, I am not and can’t answer that question with confidence. What I can say is that if I were Prada, even the slightest possibility of a correlation existing between Twitter presence and revenue would certainly spark my interest. I would be paying attention to my competitors (Burberry), and keeping a close eye on their Twitter activity (using a glamorous tool such as Rival IQ, of course!).

Alright, now for a little review session! Let’s revisit the key elements that you should consider on your adventure to Twitter stardom.

Time for some questions. What companies do you feel are doing a great job on Twitter? What do you think are key elements that lead to success on Twitter? Let me know in the comment section below!