While the World Cup has taken front stage this month, July is also a month of Independence Day celebrations in several countries.  Argentina, Canada, Colombia, the United States and Venezuela all celebrate their respective Independence Days in July.

At Rival IQ, we believe social media is also “revolutionary”, and we love competition, so it seemed apropos to hold a social media face off amongst the five. 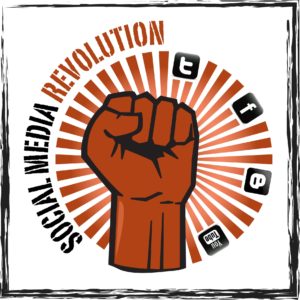 Competitive landscape: companies from each country

However, measuring the social media process of our five featured countries proved a battle of epic proportions, so instead we pitted the highest revenue generating company from each country against each other for our online battle.

In doing so, we also sought to answer the age old question (well, it’s actually a rather new question):  Does a correlation exist between corporate revenue and social media performance?

The Crumbling of (Social) Empires

Before we get into the “Social Media Face Off” let’s acknowledge the Independence Days of each of these glorious countries (in order of date celebrated)!

1. Canada: On July 1, Canada celebrates the day it became a self-governing dominion of Great Britain!

2. The United States of America:  Only three days later, July 4, the poor British get hit again when the colonies celebrate their independence from the kingdom (fortunately for the Brits, it did not happen in the same year).

3. Venezuela: In the first of several South American countries who fought for their independence against Spain, Venezuela holds its celebration on July 5th.

4. Argentina:  How amazingly coincidental and awesome for Argentinians to have won the World Cup semi-final match against The Netherlands on the same day their country celebrates its independence, July 9th.

5. Columbia: In what was clearly a very bad month for Spain, Columbia wraps up our July Independence celebrations on July 20th.

Who are the largest revenue-generating companies?

All five of our celebrating nations sport an economic powerhouse, from the world’s largest retailer to three petroleum-related companies to a steel manufacturing conglomerate.  Let’s meet our contestants:

In analyzing the social media presences of these companies, our social channel matrix shows that every company has at least a basic presence on Twitter, Facebook and LinkedIn. However, what this matrix does not show is how active these companies actually are in these social networks. As we tell our customers, it’s not just about being there, it’s about your level of activity and engagement.

Given this variance, we chose to focus our analysis on Twitter, since all five companies have an active and engaging presence on this social network.  We did worry that Walmart, as a huge consumer name worldwide, would crush the competition on Twitter.  But as with any good revolution, guerrilla (or, in this case, social) warfare can bring surprising results.

And the data did surprise us from the start, as Venezuela edged out the Americans with 216,693 Twitter followers! Impressive.

With this result, we had to dig further.  Is this something unique to PDVSA or do Venezuelans just love Twitter?  It turns out its a little bit of both. PDVSA does a little less promotion and a lot more news and information to keep the public informed on events happening on their own turf.

They are giving the people information that they want to hear. On top of that, the people in Venezuela also prefer to use Twitter to express themselves other than any other social media platform because Twitter is effective in reaching a large amount of people from all around the world, from different walks of life and for spreading the word.

Venezuela wins in both quantity and quality of engagement

While having the largest following is a notable feat, having an engaged following is much more impactful. And again, PDVSA sets the bar with not only a huge following, but one that is highly engaged.  Their success is a result of their high post frequency, interesting content, personal communication with their followers. It could be tough for a large company, especially on social media, to create a personal connection to people and PDVSA did it well, we commend you!

Congratulations to all of our countries, companies and followers in our Independence Day social media face off.  If there is one takeaway from today’s history lesson, it is that the biggest does not always win.  Therefore, you have a great opportunity, no matter what size of your organization or marketing budget.

Winning in social, and in the hearts of your customers, takes commitment, time, hard work, creativity and a desire to communicate to and engage with your audience.

Start by growing your follower base with quality followers and building out great content.  To figure out how to do that, you can benchmark yourself against the market leaders or your competition, and build out your strategic plan!

UW senior majoring in Anthropology & International Studies. She is a born & raised Southern California, who is made up of sass, sarcasm and Tapatio. Although she has lived in Seattle for the past few years, she is still in denial about the weather and refuses to give in to the North Face Seattle style. She is currently known as the Rival IQ Marketing Intern, and office fashionista.