The Run-up to the Men’s Final Four on Twitter

If you love college basketball, this time of year is definitely your favorite. If you’re also a social media junkie, you’re probably not getting much else done. We’ve got a little March Madness going in the office, and the time felt right to look at the Twitterverse going into the Final Four.

The surviving teams at this point are UNC, Oklahoma, Villanova, and Syracuse. 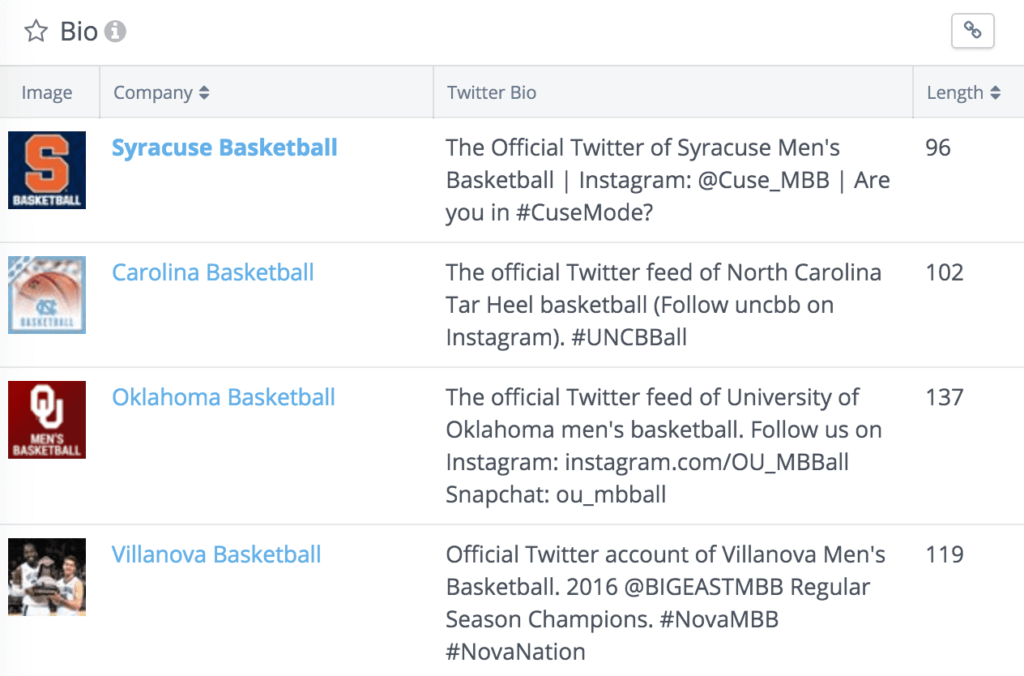 We’re down to the Final Four!

Taking a look at their Twitter followers, Carolina has the largest following by far. But as we all know, that doesn’t mean much at this time of year. The real concepts we’ll be getting into are how they’re engaging their audience to expand their reach.

Carolina has quite the audience, but don’t count out Syracuse!

Since the start of last weekend, each of these teams has been going wild on Twitter. Syracuse is leading the pack with over 41 tweets a day since Saturday the 26th. Typically, we don’t tend to see the most active handles coming in with such high engagement rates. But, Syracuse is defying the norms – they’re putting out a ton of tweets and they have a 0.73% engagement rate per tweet! Go Syracuse.

One of the key drivers to their engagement success is video. The average engagement rate per post for video among these four teams is 1.37%. Syracuse is smart, pumping our 4.4 video tweets a day while everyone else is putting out only 1.5 video tweets a day. These folks are on point! 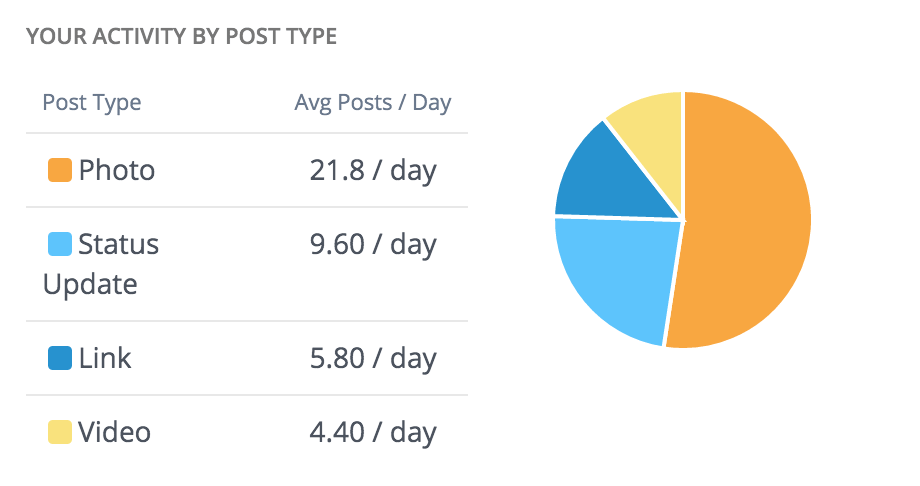 Syracuse knows that video works, and they post more than 4 video Tweets a day. 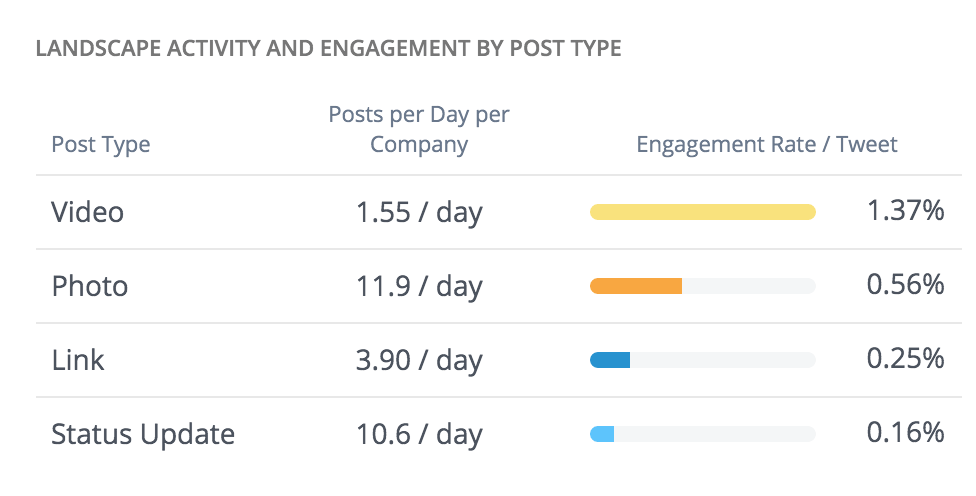 Video is what drives engagement in this landscape!

Let’s look at the top tweets driving Syracuse’s Twitter performance. Their best tweet has over 4,300 retweets and 3,000 likes. The Syracuse basketball fans are clearly very excited. 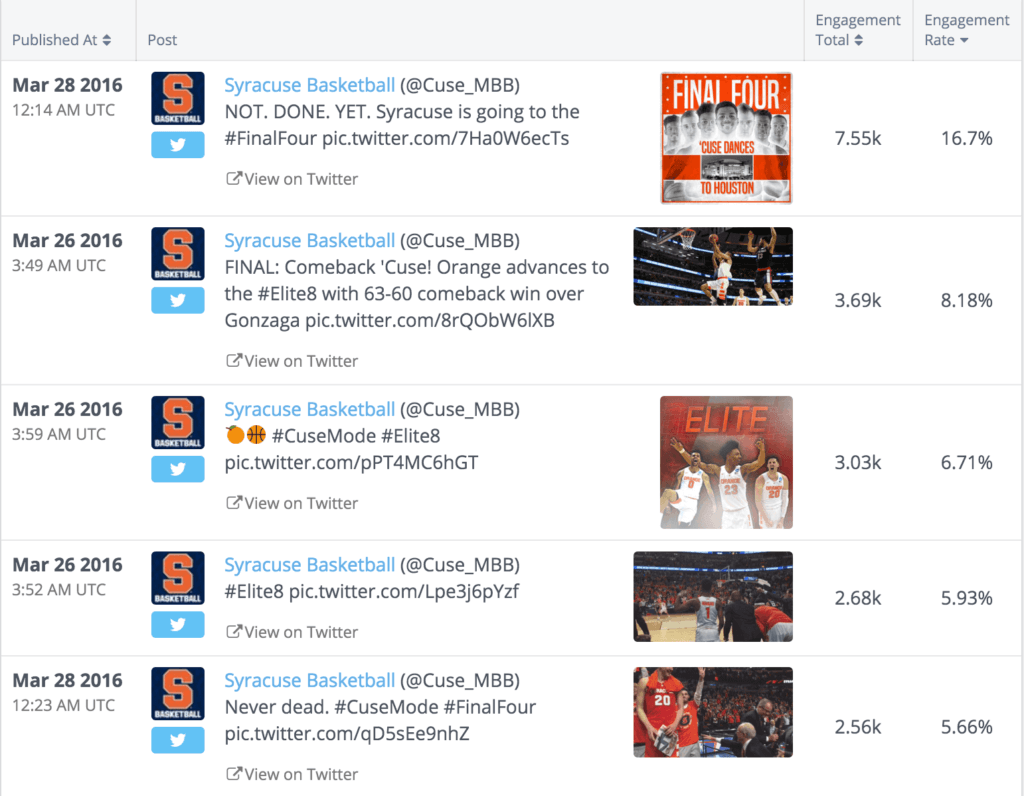 The top tweets for Syracuse.

Big Event? Get your Hashtags Right!

Hashtags are a key to driving conversation around big events. If you use the right ones, you’ll pick up additional reach and drive engagement you’d have missed otherwise.

For these final four teams, the last four days have been all about three hashtags: #FinalFour, #Elite8, and #MarchMadness. Perhaps this isn’t surprising since that’s what everyone else in the world is using as well. The funny thing is that beyond these shared hashtags, all of the hashtag activity is very school-centric. Syracuse is all about the #CuseMode. Villanova is rocking #LetsMarchNova, and the Tarheels are pushing on #HeelsLockin. 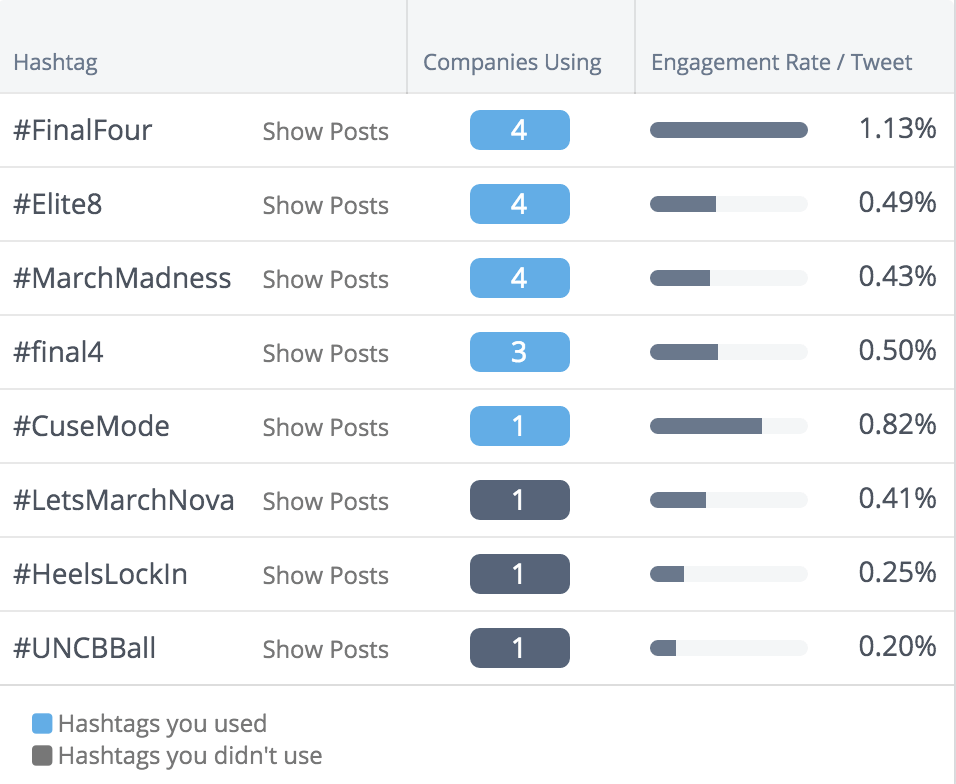 Event hashtags extend your reach. If the event you’re participating in has a hashtag, use it consistently and correctly. 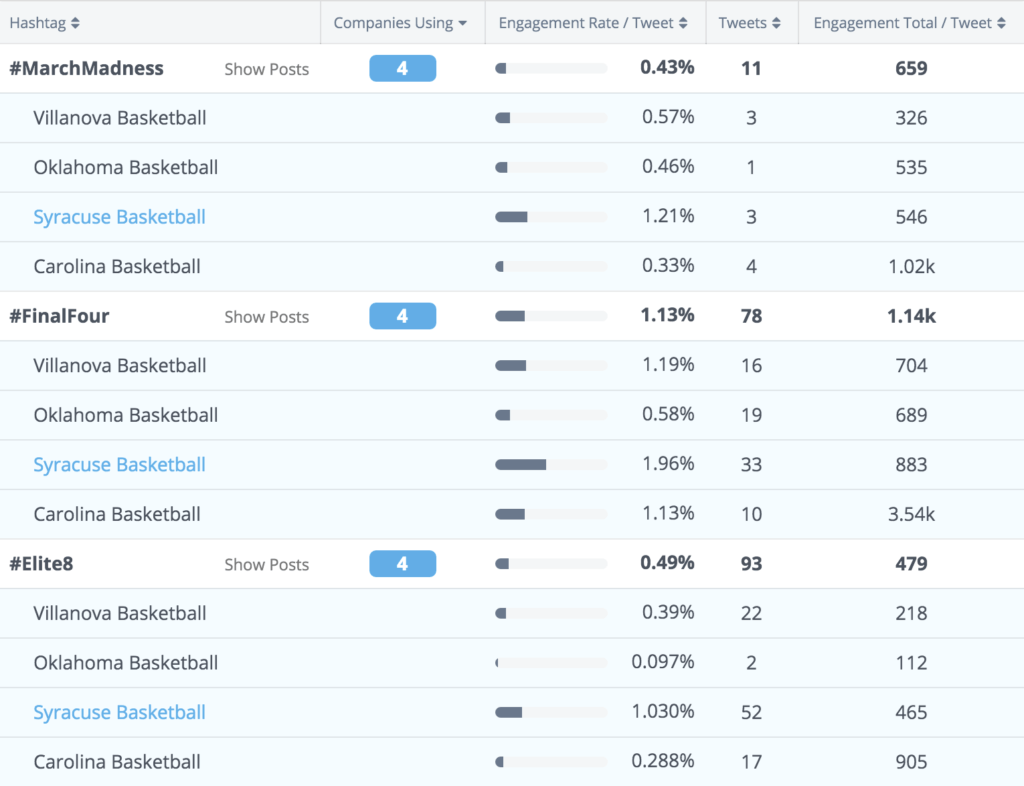 #FinalFour is where most of the action is heading into next weekend.

Of course, Carolina’s fans are giving them lots of love as well. Given that their Twitter audience is almost 7x that of Syracuse’s, they should definitely get credit for their strong engagement rate as well.

Just for fun, here are all of the top tweets for each of the 2016 Final Four teams. Enjoy the rest of the tournament! If Twitter is any indication, Syracuse might just be the next national champion.

The top tweets for Syracuse. 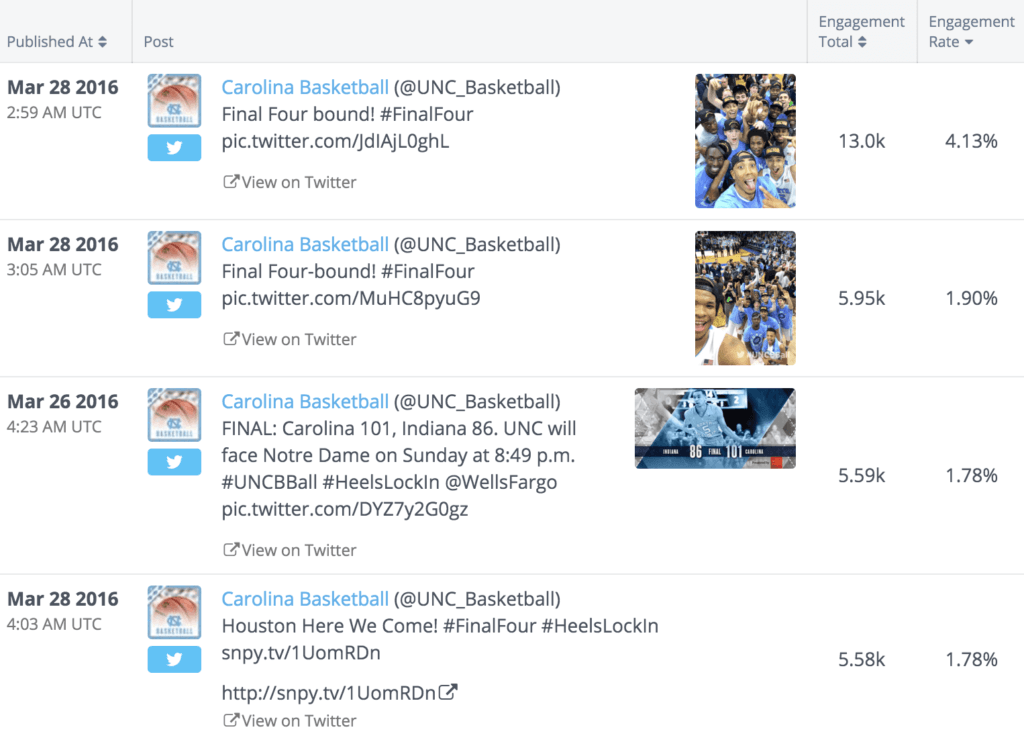 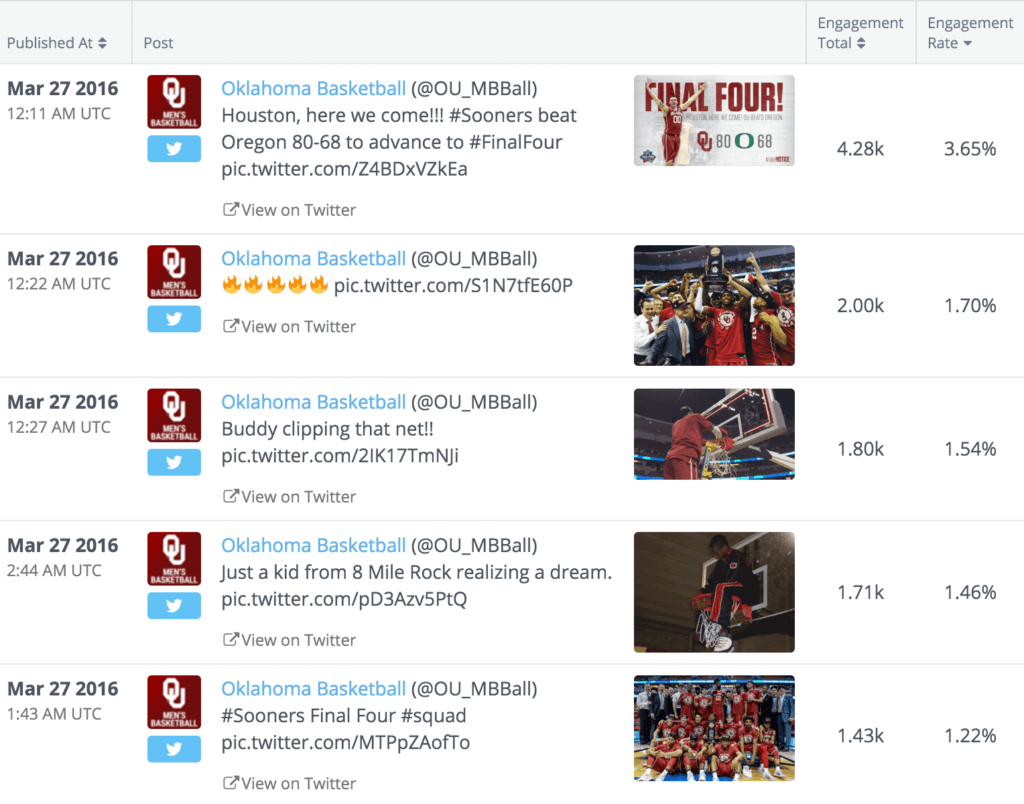 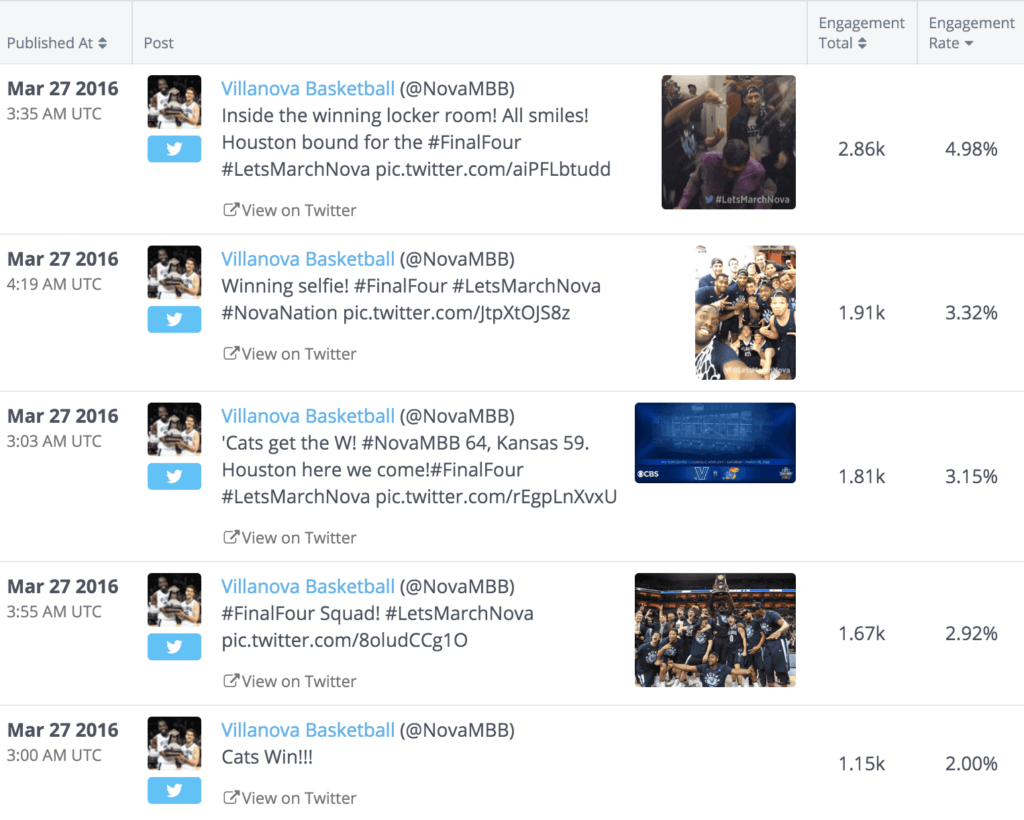 Hey there, I'm Seth, one of the co-founders of Rival IQ, where I stay busy working on product design and marketing! When I'm not working, I'm probably playing with my sons. Follow me on Twitter for rantings and opinions on all the things.